A Tribute to Angel Pagan 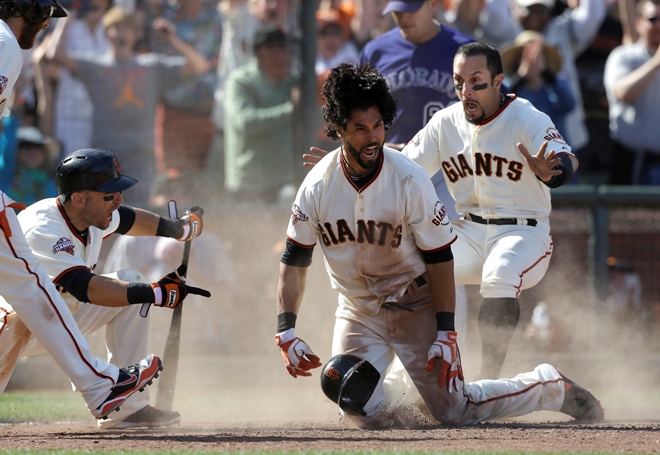 Angel Pagan was a good Giant. Often a polarizing figure to some fans, Crazy Horse experienced an up and down career in Left Field for the Giants. Who could forget his inside the park walk off homer in 2013? At his best Pagan was a dynamic player leading off for the Giants. While not known for his defense, he was capable of spectacular plays and the occasional miscue. His combination of speed and switch-hitting abilities made him a key part of the 2012 World Series Championship.

I always loved Pagan’s intensity, that raging sweaty black hair and beard, and that salute to teammates. It is interesting how many Giants fans criticized him. I think he was a polarizing figure because of his intensity. The wrath Pagan inspired might say something about the cultural divide between some fans and how Angel plays the game with such extroverted passion.

It is likely, if rumors are to be believed, that the Giants will not re-sign him and he will remain a free agent. Where Pagan, the 35 year-old Puerto Rican native will end up is anybody’s guess at this point. It seems the free agent market is not kind to aging outfielders with an injury history.

The Grand Slam Against the Pirates

Pagan rebounded nicely last year to have a respectable season at the plate hitting a career-high 12 home runs with 55 RBI’s mostly at the top of the order. Pagan is a player I believe whose contributions go beyond the statistical. What he lacked in arm strength and defensive consistency he made up for with a rare commitment to playing hard and a cheerleading philosophy that kept the fire burning in those chilly Willie Mays Field games.

The Inside the Park Homer

If he played his last game as a Giant I will miss him. Farewell Angel and thanks for the memories!