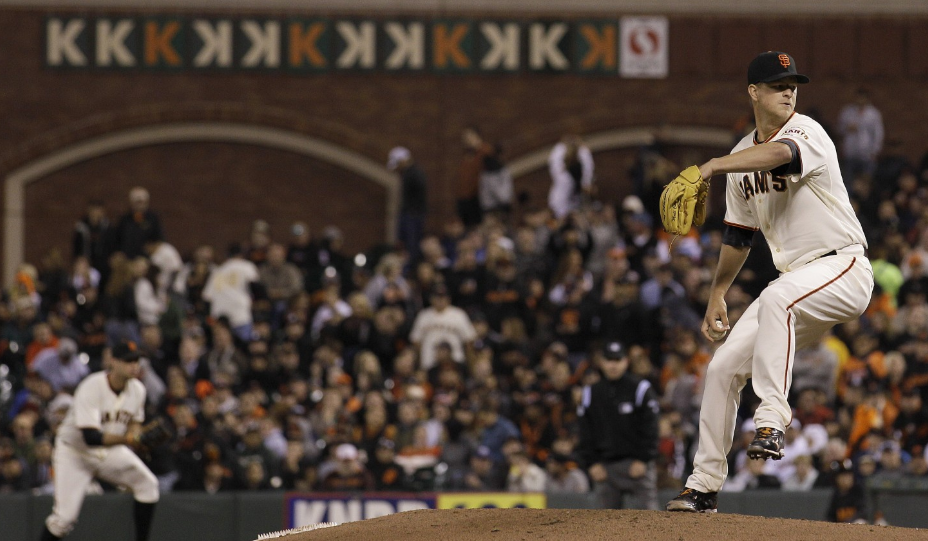 I love Matt Cain. For me, he will always have a permanent home in the Giants Pantheon for 2010, 2011, and 2012. When one of your home-grown starters pitches righteously and leads you to two World Series championships there is no debate. Matthew Thomas Cain (AKA The Horse) is now officially a living legend. Let us not forget.

The past 4 years have not been kind to The Horse. Between injuries and general ineffectiveness witnessing one of our heroes fall from grace and suddenly become a mortal again is a painful phenomenon.

Watch that 2010 World Series video and note the exquisite slider: perfectly located in a paralyzing position to right-handers and sharply-breaking away from barrels of bats. The look of despair on the Rangers’ hitters is priceless. They were defeated. Cain was in command, though he was visibly nervous on the mound. His stuff was excellent. Matt Cain was that rare pitcher living up in the zone with his fastball and getting many weak fly ball outs while shifting eye levels to perfection with his slider and other off-speed pitches.

While his velocity may be only 2-3 MPH down from his peak years, it’s enough to change the way hitters approach Cain at the plate. When you no longer fear the movement of a 93-94 MPH fastball up you can start to sit on breaking pitches. Cain’s slider has lost its slide and his fastball is not fasting as much as it used to. To make matters worse, The Horse has lost confidence in his pitches as a result. He is now prone to nibbling around the corners, often falling behind in counts. The same thing happened to Tim Lincecum, Javy Lopez and Ryan Vogelsong. When a pitcher knows his stuff is not as fearsome it becomes very difficult to attack the zone and challenge hitters early in counts.

The result for Cain in 2016 was a demotion to the bullpen and limited use as a middle reliever. It was a humbling demotion: from Ace to bullpen banishment in the span of three years.

There has been talk around certain Giants circles (at least in my house) that Cain could be converted to a closer or set-up man for next season. While it is always exciting to theorize about a career resurrection for one’s heroes, it is unlikely the Giants will take this path. This is not to say that Cain cannot be effective somewhere in the bullpen and as a spot starter, in the mode of Albert Suarez or Yusmero Petit. I believe Cain’s arm still has plenty of bullets in it and his future may rely on him developing a lights-out change-up or some other off-speed pitch that he can command enough to get strikes with early on in the count. He appears to be a physically stronger and more durable pitcher than Timmy and I have a feeling he will find new life in his career, be it with the Giants or another team, before he retires.