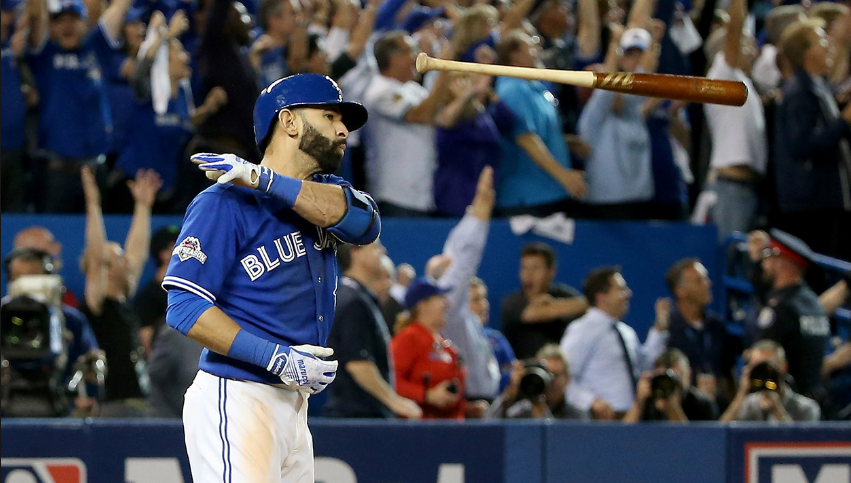 Yes, the should! I love Jose Bautista (AKA “Joey Bats”). Let me tell you why. He can hit! He can hit dingers! He is fun to watch! He has a penchant for the big homer! I also love his cockiness and his epic bat flip in the 2015 ALDS with the Rangers. You gotta love a player who so obviously displays the joy of hitting home runs on his sleeve and who seems to embrace the spotlight.

But, let’s get serious and explore his stats, specifically his BABIP: Bautista’s BABIP actually went up in 2016, from .237 to .255. He has only had one “normal” BABIP in the last five years, with the rest of those seasons in a range lower than his stats would suggest. He missed significant time due nagging, but not serious injuries last season. I think he is a fairly low risk, high reward veteran signing in the Morse mold that could fit nicely with a glaring Giants need. Remember, the Giants have to face Kershaw, Rich Hill and possibly Jose Urias, all solid to great lefties about 15 times next year. They need a right-handed bat to bring some balance to the lefty-dominated lineup.

With advanced metrics and his advanced age (36) taking a toll on his big contract free agent dreams, Jose Bautista would be a superb addition to the Giants for a one or two year deal for about $12-$15 million per year. Though his defense grades to below average, I believe his offensive upsides more than make up for his adventures in the outfield. Hell, the Giants once played Michael Morse in left and they won the World Series that year! Remember those days?

With a team in such a dire need of the long ball hitter in its lineup, especially a right handed one, Bautista could be one of those strategic bridge signings that would provide big time pop off the bench or in a platoon with Big Mac and JP. for one or two seasons as the Giants come up with a more long-term solution for their outfield.

I have another theory: suppose the Giants sign Joey Bats to a one year deal and then package Jarrett Parker and/or Mac Williamson in some sort of trade for a younger player. Remember that the Giants have Austin Slater waiting in the potential wings for solid outfield help. They could also theoretically explore the possibility of Christian Arroyo or Kelby Tomlinson in the outfield.

My point is the Bautista signing would be a good fit for the Giants with only the high cost of the potential first round draft pick. Hitters like him are worth it. Throw sabermetrics to the wind with Bautista. He is that rare anti-advanced metrics type of player whose value as a home run threat from the right side transcends the worries about his defense. This is a case of meeting your needs with a premium hitter who looks like he will be ready to bounce back and prove himself with a great season to re-up his value in the new free agent market at the conclusion of the 2017 season. I love what the signing would say to Giants fans and baseball in general: We want to win now, take your WARS and your advanced metrics and stick them where the sun don’t shine. We want an old-school power hitter to balance our super duper everyday lineup with a dose of the fear of God in pitcher’s hearts when he steps to the plate.