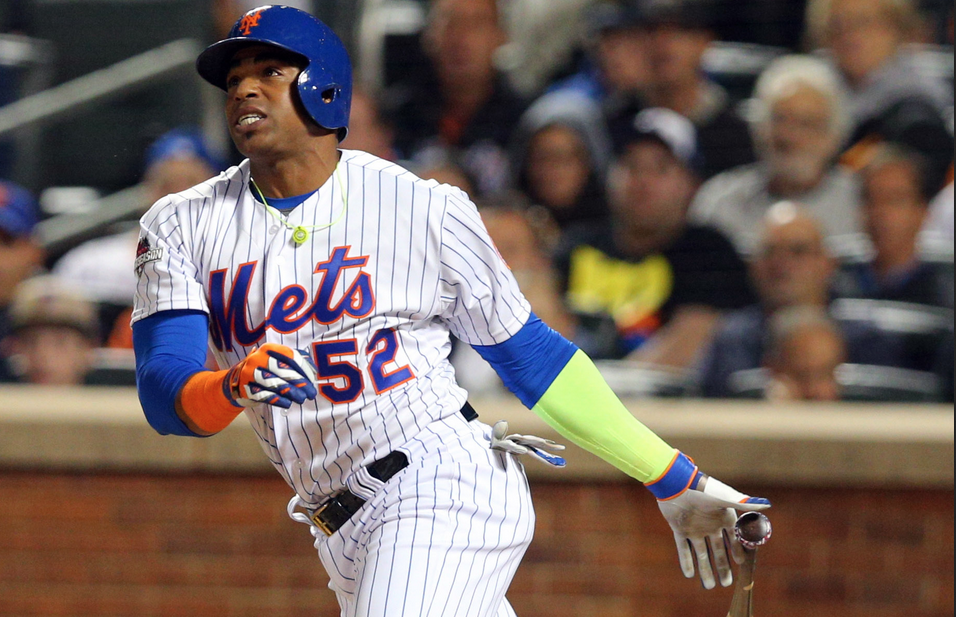 Word around the baseball grapevine says that Yoenis Cespedes is opting out of the remaining two years of his contract with the New York Mets. He is owed $47.5 million for those two years but the announcement is no surprise. There are high expectations for a serious bidding war for his services among teams in need of a power-hitting outfielder. Yoenis Cespedes has been the Mets MVP the past two seasons and it is rightly assumed that they New York Metropolitans will do all they can to re-sign their slugger.

Cespedes has had one of the strangest career arcs in recent memory. A foreign signee by the A’s, he was traded un-ceremniously to the Red Sox, who then traded him to the Tigers, who then traded him to the Mets.. You get the picture.  One has to wonder as to why so many teams are un-willing or unable to keep this talented player on their roster. The former center fielder seems to have lost some range and speed in the past couple of seasons, due in part to various injuries. His bat though… Wow, that bat. He can rake. He destroyed the Giants earlier this year at Willie Mays Field and basically carried the Mets on his shoulders to the NL Pennant last year.

This year he was a principal factor in taking the Mets to the Wild Card game as well. He answered his epic second half in 2015 with a 2016 season that resulted in 31 homers, 86 RBIs and a .280 batting average.

The 31 year-old Cuban is a star and in a very weak free agent market he figures to collect a payday of over $125 millon. Will the Giants go out and spend the cash to upgrade their lineup with Cespedes? Should they? What about his defensive metrics that indicate a potential loss of range? As far as I am concerned, Cespedes is the quintessential risky free agent. He is on the wrong side of 30 and has trended downward in some offensive categories like OPS and BA. His defense has been a bit less than spectacular in the past two seasons while his arm is still a major asset, one of the best in the Majors.

He seems to be a very un-Giants player on many fronts but there is something about him that might be worth taking the risk on. Aside from his dinger potential, he remains a fairly consistent run-producer and if the Giants want to get out of that 3 singles and a cloud of dust offense mode they may consider taking the leap of Cespedes faith. I have always enjoyed his swagger and his penchant for big bombs in big moments.

Should the Giants sign Yoenis Cespedes? Talk amongst yourselves.