The 1989 World Series and the Loma Prieta Earthquake: 27 Years Ago Today 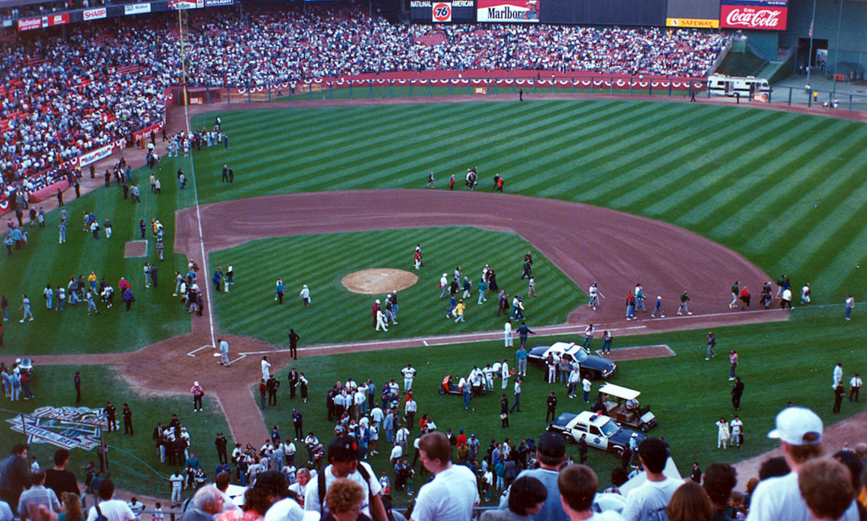 I will never forget where I was on October 17, 1989 when the Loma Prieta earthquake struck and halted the World Series in mid-stream. I had just moved back to Montreal from South Florida and I was getting settled into my new apartment near McGill University, about to turn Game 3 of the World Series on. There was a commercial just as my TV turned on then a strange look on Al Michaels’s face. I recall vividly that something bad must have happened. I tuned in hoping to watch Will Clark and the boys take game 3 and get back into the Series.

Instead were were riveted to the screen by the surreal sounds and sights of the the game being cancelled and San Francisco in the midst of a terrible crisis that cost many lives and billions of dollars in damage. It was one of the most moments when a baseball gets shoved aside by life’s priorities. Suddenly I was no longer thinking about defeating Mark McGwire, Jose Canseco and Tony LaRussa’s band of Bashers.

Unfortunately for the Giants, the Series was postponed for ten days. They lost any edge they might have had returning the Series to Candlestick. The world and the city had other priorities and the A’s swept after starting Bob Welch and Dave Stewart again to finish off our baseball heroes.