Cueto and Giants Out-Duelled by Lester and Cubs, Fall 1-0 in Game 1 of NLDS 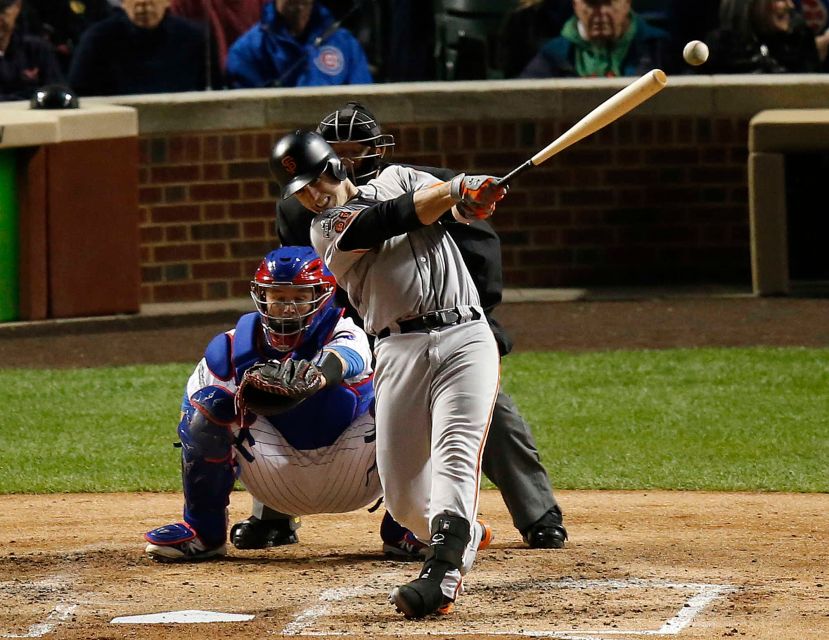 The New Hypnotist Is Suddenly on the Hotseat

Well that new hypnotist sure didn’t accomplish much in her first game. In another pitcher’s duel, the Giants and Johnny Cueto were vanquished by the Cubs behind John Lester’s 8 shutout innings. Johnny Cueto and Jon Lester both pitched extraordinary games. The Giants second ace was stellar allowing only 3 hits and 1 run in 8 innings of work. Unfortunately the run he allowed proved to be the game-winning home run by Javier Baez as Jon Lester overpowered and humiliated the Giants hitters. The score was 1-0 but it wasn’t that close. That felt like a 10-0 game once the Cubs got their lone run. The Giants bats were that quiet. Their hits were weak affairs. Their outs were weaker. Despite getting lead-off runners on in the first 3 of 4 innings, the Giants kept hurting themselves with questionable execution on the bases. Gorkys Hernandez was thrown out trying to steal in the first and Conor Gillaspie was picked off in the third.

Johnny Cueto, unitl the 8th, was more impressive than Jon Lester. The Cubs has only 2 hits through 7 innings and looked completely flummoxed at the plate. Cueto was pumping his fastball by the Cubs sluggers after tantalizing them with change-ups and sliders down in the zone. His game plan was excellent, his poise superb. It was clear from the first inning on that Cueto was using his off-speed pitches to set up his fastball. Buster Posey’s pitch calling was in sync with Cueto the whole game. I don’t recall the powerful Dominican ever shaking off Captain America.

The game looked like it would be decided by the bullpen until the fateful 3-2 fastball that eased over the plate and rose to a comfortable level that collided violently with Baez’s powerful stroke.

Eduardo Nunez Is Not Healthy

There is not much to say about this game really. Jon Lester was simply too good. Great defense by Kelby Tomlinson and Gorkys Hernandez thwarted any Cubs hope at a rally. Buster Posey’s ninth inning double was for naught. After Aroldis Chapman came in to pitch the ninth Gorkys Hernandez struck out on a questionable check swing. Replays showed he did not commit. Bochy made a bold move to pinch hit Eduardo Nunez for Brandon Belt, the next hitter. Nunez hit a weak grounder to second that looked like he would be able to leg out for a base hit but unfortunately our starting third baseman was hobbling down the line and thrown out easily as he is still suffering from his hamstring pull.

It is a curious decision to allow Nunez on the roster if he cannot utilize one of his most important weapons as a baseball player: his speed. I was not thrilled with the idea of pinch hitting for Brandon Belt though I understand the thinking if Nunez is healthy. Clearly he is not and based on that at-bat he may not recover this postseason should the Giants advance.

The starting lineup was a surprise with both Denard Span and Joe Panik being benched in favor of Gorkys Hernandez and Kelby Tomlinson, respectively. Bochy was playing for hitting match-ups and willing to sacrifice defense at second base. It turns out neither starter could hit much while the defensive play from both was stellar. I can live with the Span-Hernandez platoon though I prefer the experience of Denard Span in a postseason game, especially since his bat has come alive in the past ten days. With regards to Joe Panik my take is that he is too good a player to ever sit. His defense, scrappy play and leadership should never be on the bench unless there are other circumstances. Perhaps he is not 100% after his concussion earlier in the year? I think the risks and downsides far out-weight the potential benefits with platooning Joey Baseball. I also suspect it might create some tension among the players, particularly in light of how recently Bochy decided to start benching Panik. We all know he has been struggling at the plate but it is strangely un-Bochy like to lose faith in one of his starters so quickly.

Overall the game was a scintillating and suspenseful affair that lived up to its billing as a battle between two strong teams with opposite postseason histories. The Giants played spectacular defense with a stunning catch at the warning track by Gorkys Hernandez and a special play by Kelby Tomlinson in particular. This makes six straight one-run games between the  Cubs and Giants. Clearly these two teams have the best starting pitching staffs in baseball. It appears the games will come down to execution on the base-paths, defense and which lineup will play with depth and power from top to bottom.

The Giants will have to find ways to create runs at Wrigley if they want to win this series, averaging less than two runs per game in their last 5 contests in Chicago. While tomorrow’s game is not a must-win, the Giants will prefer to avoid going down 0-2 in a best of 5 series. A win tomorrow and they re-take momentum.