Giants Near Elimination with 5-2 Loss At the Hands of the Cubs in Game 2 of N.L.D.S 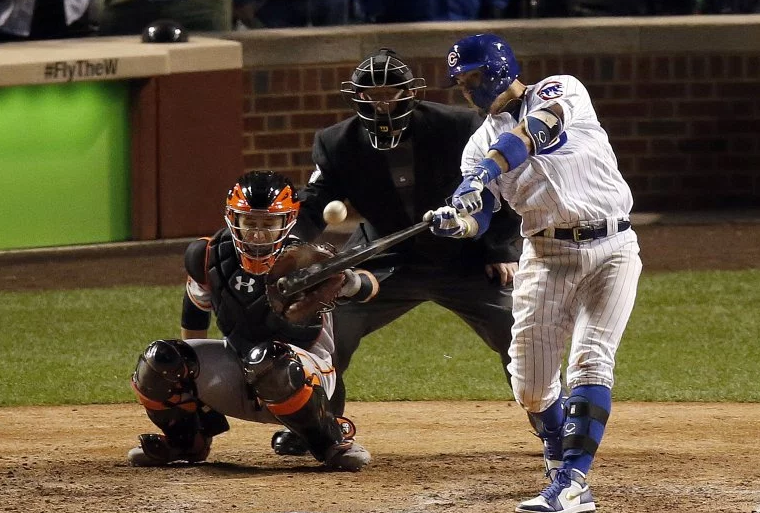 Ok, so the narrative is the Giants are going to win three in a row against a talented Cubs team to advance to the N.L.C.S. I get it. I learned my lesson in 2012. No matter how much I want to give up, count the Giants out, and think they are toast… I will not. I simply refuse to believe this season is going to end with a series of dis-spiriting losses to the highly-favored Chicago Cubs, the potential team of destiny.

The Giants lost 5-2 in pretty much a garden variety ho-hum way. Jeff Samardzija was both terrible and un-lucky, surrendering 4 runs in two innings on a combination of hard hit baseballs and broken bat bloopers, one, a two-run single by starting pitcher Kyle Hendricks. You know it’s not going to be your night when the opposing team’s pitchers drive in more runs in two at-bats than the Giants have in two games. That’s because in addition to Hendricks’ duck snort, some guy named Wood, a relief pitcher for the Cubs appropriately-named, murdered a fastball from George Kontos in the fourth inning for a solo home run to add to our misery right after the Giants scored two to make a game of it.

I don’t know what happened to Smarge. His fastball was hitting 97 but suddenly he forgot he had 4 other pitches in his arsenal. As brilliant as the Giants game plan was last night with Cueto on the mound, one has to question what Buster Posey and Samardzija were thinking by constantly trying to challenge the Cubs with hard stuff. Dexter Fowler, remember him? Once again he set the tone of the game with an extraordinarily feisty at-bat leading off the bottom of the first. After fouling off 169 pitches he doubled off the wall and the nightmare began.

Apart from one at-bat by Joe Panik (a beautiful opposite field double) and Gregor Blanco (a pinch-hit double that drove in Joey Baseball) the Giants looked pretty much horrible at the plate the entire game. They looked like the Australian cricket team attempting to play baseball on a global goodwill stopover in Scottsdale during Spring Training. It was ugly. Buster Posey waved helplessly at bad pitches and struck out feebly in the 8th. Brandon Crawford swung at two balls in a row after working a 2-2 count, only to ground out in a key at-bat in the 5th. Hunter Pence should be nicknamed Hunger Pence, you know the guy in the Hunger Games who gets to thwack teeny boppers with glee because he never made his High School baseball team since he couldn’t hit a lick, even when his dad, the President of Panem made sure the opposing pitchers served up meatballs for him to hit.

I could go on and on about the lack of execution among the team’s hitters but I will resist that urge. It might simply be the year of the Cubs. We will have to wait and see. For now the Cubs pitchers are making the Giants look like a AA team at the plate and I, for one, am not happy about it. Bruce Bochy’s comments after game 1 were interesting. He said the Giants were playing very well and he liked what he saw from the team. I actually agree with him to some extent. The team’s defense and hustle have been impressive. The fight and effort are there. It’s just that the results are not. It may simply be that the Cubs are better than the Giants right now. Those are difficult words for me to type at 1:23 A.M. but it doesn’t make the possibility any less true. The Cubs have swagger, confidence, and an energy about them that the Giants simply do not.

The Giants get a day off tomorrow to rest their weary minds and bodies. Game 3 will be at home with Madison Bumgarner on the mound ready to put the team on his immortal shoulders once again. I wouldn’t miss it for the world.