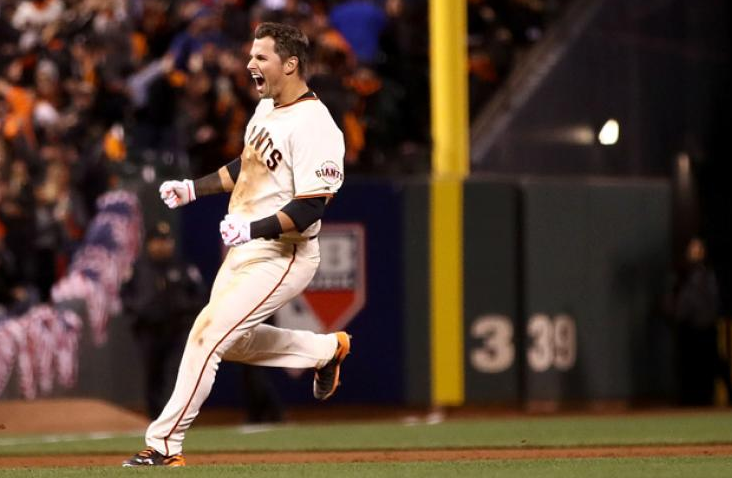 This one was for MadBum!

In a ho-hum NLDS game 3 that nobody will remember in two days, the indomitable Giants of San Francisco vanquished the Chicago Cubs 6-5 in 13 innings to push the heavily-favored North Siders one game closer to elimination. Joe Panik’s double off the wall in the bottom of the 13th inning drove home Brandon Crawford who lead off the inning with a double of his own.

There is so much to write about this memorable, incredible, unbelievable, epic, suspenseful and thrilling game that it will be simpler for me to make a bulleted list of items rather than trying to make a narrative out of it.

That was a game destined to enter the lore of Giants playoff classics for so many reasons. Let’s begin with the story line of the Giants narrowly-escaping an embarrassing sweep at the hands of the upstart Cubs. This was the tenth elimination game in a row won by the Giants, a Major League record and certainly one of the most memorable. Between the horrible umpiring, unconscionable review that failed to over-turn a call at first that went against the Giants, and the general pro-Cubs bias in the media, the Giants were basically an after-thought most of the game. They were bit performers sharing the stage to the leading men from Chicago.

The chess match between Joe Maddon and Bruce Bochy ended up a checkmate for the San Francisco manager after the Chicago skipper depleted his relief corps and bench. His gamble to pitch Chapman, his closer, with nobody out in the 8th inning backfired. Maddon was liberal with his use of relief pitchers throughout the 7th, 8th, and 9th innings which meant that there was only one Cub pitcher available after Montgomery. How ironic that Bochy, the manager who never met a late-game relief match up he didn’t like, had more arms available in the bullpen than Maddon. This was a crucial part of the game that would eventually turn in the Giants favor.

This game had everything a baseball fan, a sports fan could ever dream of: epic homers, amazing catches, clutch hits, triple digit fastballs, a raucous crowd, lead-changes, comebacks, a historic story line and much much more. The suspense was ridiculously entertaining. The plot-lines were many. If anyone ever tells you baseball is boring just make them watch this game. Only baseball could provide such scintillating drama and compelling story lines worthy of William Shakespeare and Alfred Hitchcock both.

I am writing this on four hours sleep so I will refrain from going into further detail about the Giants lack of aggressive base-running that may have cost them at least two runs or the continued media and officiating bias that is embarrassingly pro-Cubs. This was one of the biggest Giants wins of the year and certainly since last Wednesday’s Wild Card game.

One of the most gratifying aspects of this game for me was how the Giants did not give up and fought with everything they had, even with all the set-backs and adversity, with their season on the line! Bruce Bochy, Brian Sabean and Robert Evans, indeed the entire Giants organization, have created a culture of perseverance and relentless pursuit of victory, regardless of the moment or the player. The Giants may not have the biggest numbers, the pitcher with the best fastball, the hitters with the most home runs, but they have a will to win, a quiet confidence and a championship pedigree that is already legendary and something all fans should be proud of.

I am still in a bit of disbelief. I need to catch a nap because all the fun begins again to night with Matt Moore on the mound in game four, pitching to bring the Giants one step closer to the NLCS.

Two down and ten to go.