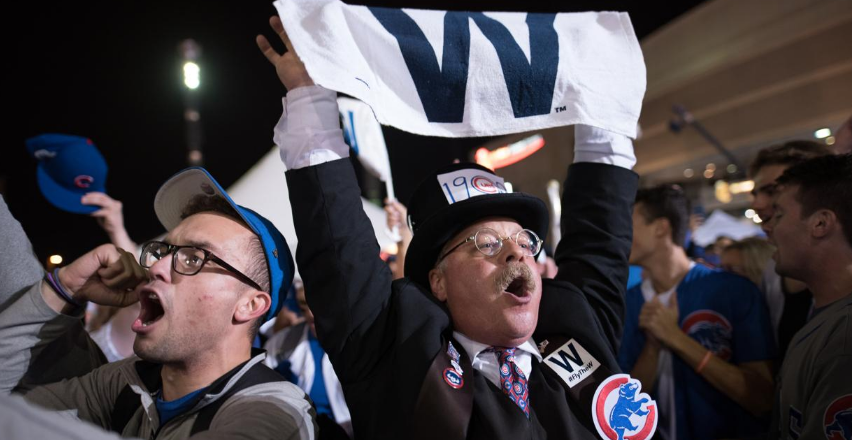 The Chicago Cubs have won the World Series. That’s not a glitch in the Matrix. That’s not some alternate reality flick. Time stands still. The sporting world has been torn asunder…

Growing up (I am old enough to remember Harry Caray) the Cubs were always a sports joke. Their ineptitude and futility transcended baseball. It transcended sports. The team was a punchline, a cultural meme before there was social media or the Internet. Indeed it was often theorized by Cubs devotees themselves that the Wrigleys never were serious about fielding a contending team, or even a good one. The theory goes that chewing gum magnates did not want to have to devote too many financial or other business resources to their cash cow since the Cubs were so profitable already.

This is a franchise whose middle name is tradition. Remember when the first night game at Wrigley in 1988 provoked a public outcry and made headline news? The Cubs were lovable losers, sentimental failures, the pathetic uncle or brother nobody liked but everybody loved. Note the past tense of the previous sentence!

To Chicagoans, the Cubs are also a cultural paradigm, like the Yankees in New York, the Canadiens in Montreal, the Fighting Irish wherever the Irish fight, and the Cowboys in Dallas. They are more than a baseball team. They are a generational identifier. A signifer of innocence and simplicity, two very mid-Western virtues. In short, the Cubs embodied that old quaint notion of “It’s ok to lose if you tried hard, were fun, had a good time and played fair…”

Then Tom Ricketts and family bought the team. Then they hired Theo Epstein, who begat Joe Maddon… Some great trades and draft picks, a few fortunate fateful turns later, the Cubs are now a powerhouse. It is still taking me time for all this to sink in quite frankly.

After watching baseball for 42 years and witnessing the Red Sox, White Sox and Giants end their championship futility, watching the Cubs win an exhilarating and exasperating ten-inning game 7 goes down as one of my top ten baseball memories.

What does this mean for the Giants?

Should the Giants brass start to build their team as a foil to the Cubs, the way the Red Sox crafted their team to defeat the Yankees in the early 2000s?

With the Giants already winning 3 rings this decade, will the Cubs challenge our beloved boys from San Francisco for baseball supremacy?