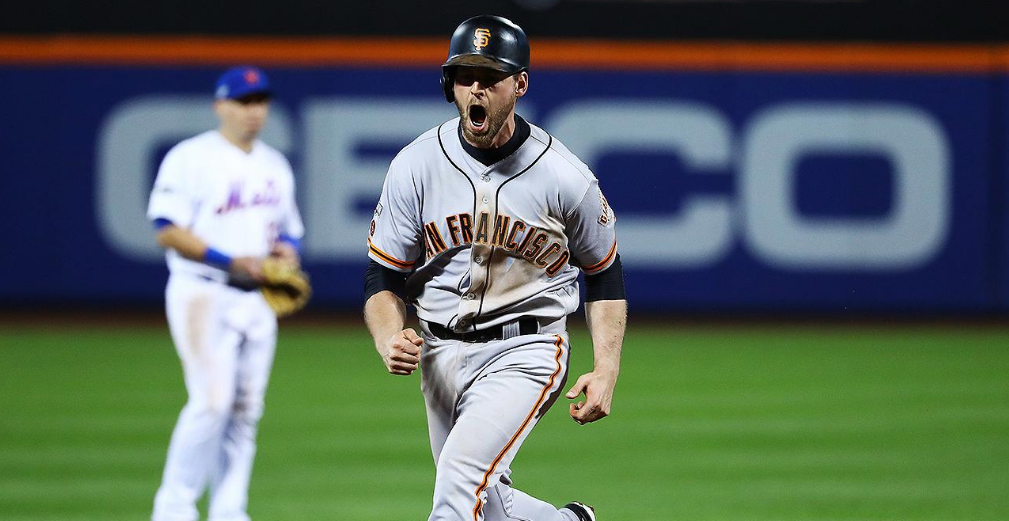 “This was one of the greatest postseason games I have ever been a part of. You can’t put into words what Bumgarner just did.”
-Bruce Bochy

In what will be seen as another postseason classic in Giants and Major League Baseball lore, Madison Bumgarner pitched a complete game shutout as the Giants prevailed over the Mets in the Wild Card game in front of a frenzied New York crowd. Conor Gillaspie’s epic home run in the top of the ninth with two men on was the dramatic hit the Giants were playing for all game long after getting blown away and humbled by Noah Syndergaard for seven innings.

The Giants Legacy Gets Even Grander

With this epic victory the Giants have won 12 straight elimination games since 2012, an astounding testament to their championship mettle. This game was why we watch baseball. It had the classic battle of aces in New York between two evenly-matched clubs with different styles. Madison Bumgarner threw 7 pitches in each of the first three innings in a remarkable display of effortless efficiency. That efficiency, thanks to the aggressiveness of the Mets hitters, would play a huge role in the game, allowing Madbum to go the distance with 119 pitches. His postseason ERA is now a ridiculous 1.93, the second lowest in Major League history for pitchers with a minimum of 10 starts.

The Drama of an Epic Game

While Noah Syndergaard matched Bumgarner with the brute force befitting of a Norse God throwing 97 MPH laser beams on the upper and outer portions of the plate, his pitch count was just a bit more elevated than Bumgarner’s because of the testy and disciplined Giants at-bats. Despite their tenacity, the Giants were hitless till Denard Span’s single on a breaking pitch in the 5th inning. While the Giants were making mostly weak contact and striking out there was reason for hope thanks to hard hit balls by Buster Posey and Brandon Belt, the latter with a runner on second and two outs in the 7th. That ball by Belt was crushed and only a spectacular running catch at the wall by Curtis Granderson in center field kept the game scoreless.

While the Giants hitters looked mortal against the golden-haired demigod Met, there was a feeling in the air that the game was turning in San Francisco’s favor after Madbum outlasted Syndergaard. The game had all the makings of a playoff classic from the first inning. It did not disappoint. Syndergaard and Madbum were two powerful aces matching each other zero for zero. Eventually Terry Collins would remove his ace after the 7th inning and 107 pitches. That is the moment when the game began to turn. After Brandon Crawford lead off the 9th inning with a double off Mets Closer Jheurys Familia, Angel Pagan struck out after two unsuccessful attempts at laying down a sacrifice bunt. The key at-bat of the inning that lead to the homer by Gillaspie was Joe Panik’s walk after fouling off many close pitches, following Pagan’s strikeout. With runners on first and second and one out the Mets had no choice but to pitch to Gillaspie even with MadBum on deck. If Panik did not reach, Terry Collins would have intentionally walked Gillaspie and Bochy later admitted that he would have been forced to pinch hit for his pitcher, potentially altering the course of the game.

And They Are Stunned in the Big City: Conor Gillaspie Hits a Home Run for the Ages

Conor Gillaspie was basically an after-thought on the Giants roster around the first of August. When Eduardo Nunez was acquired it was entirely probable that Gillaspie would not even make the 40 man roster in September or the postseason roster. It was conceivable that he would be cut from the team when he was batting in the .220s. Instead, Nunez pulls his hamstring, Gillaspie gets hot in September, plays sterling defense the last two weeks of the season, and finds himself starting in the Wild Card game. This is the stuff of bad baseball novels and another example of Bruce Bochy’s faith in his players being rewarded. Things are not supposed to go like this in real life. Conor Gillaspie hits the biggest home run of his career, so far, and the Giants upend the Mets in a do-or-die game that lived up to its billing for all its nail-biting drama.

My favorite part of the game after Denard Span caught the final out was watching Madbum’s very subdued celebration with Buster Posey. He was business-like and acted as if he had a mid-season win against the Rockies. Pure Madbum!

“Conor, I appreciate the hell out of that.”
–Madison Bumgarner to Conor Gillaspie after his three-run homer.

Madbum, We appreciate the hell out of you.