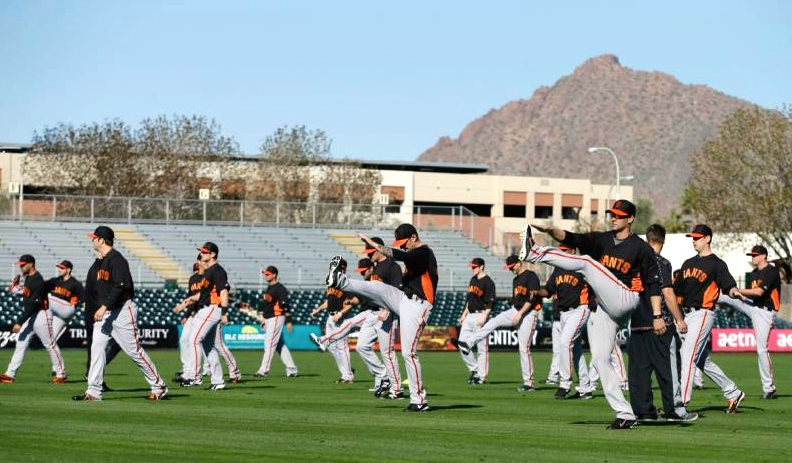 When I was a kid I was fortunate enough to live where my team, the Expos, Spring Trained in West Palm Beach. I attended many games, watched practices, harassed Andre Dawson and Gary Carter for autographs, and generally had a wonderful time dreaming of the Major Leagues and learning about the prospects on my team.

Spring Training is a special time for baseball fans because the pressure of winning is off and you can simply watch great athletes hone their skills. It is also a chance, as I mentioned, to learn more about young players and prep those memory banks. I could always claim that I watched Vladimir Guerrero and Moises Alou when they were still in A ball.

For the Giants, the prospects are looking promising. Tyler Beede will be in Scottsdale. So will Christian Arroyo, I presume.

I would love to watch Austin Slater and Christian Arroyo hit. I remember watching Mac Williamson play two years ago and being impressed with his power, thinking that he had the Major League swagger and was going to be a solid player. I felt the same way watching Brandon Crawford years ago.

The Giants recently announced their 2017 Spring Training schedule. Tickets for individual games go on sale on Thursday, January 12, 2017 at 10 AM PST. Spring Training is right around the corner Giants fans and I, for one, cannot wait till pitchers and catchers report in 34 days.

It has been a long, hard winter without baseball. The NFL is mind-numbingly boring this season. The real NHL season doesn’t get underway till the playoffs start in April. We have had to make do with talking to each other on this blog and watching College basketball and football perhaps.

This year the Giants will enter Spring Training with a few question marks about left field and perhaps an infield reserve, but not many others. The starting rotation is mostly set, with the possible exception of the number 5 starter (Ty Blach? Matt Cain?).

I highly recommend a Spring Training getaway and the Giants are offering a variety of travel promotions to Scottsdale.

There is one more lovely thing about Spring Training: your team is undefeated and its flaws are hidden. Joy and optimism reign and the anticipation of opening day makes for a sweet 6 weeks!