Last Night I Dreamt That Hunter Pence and I Became Friends 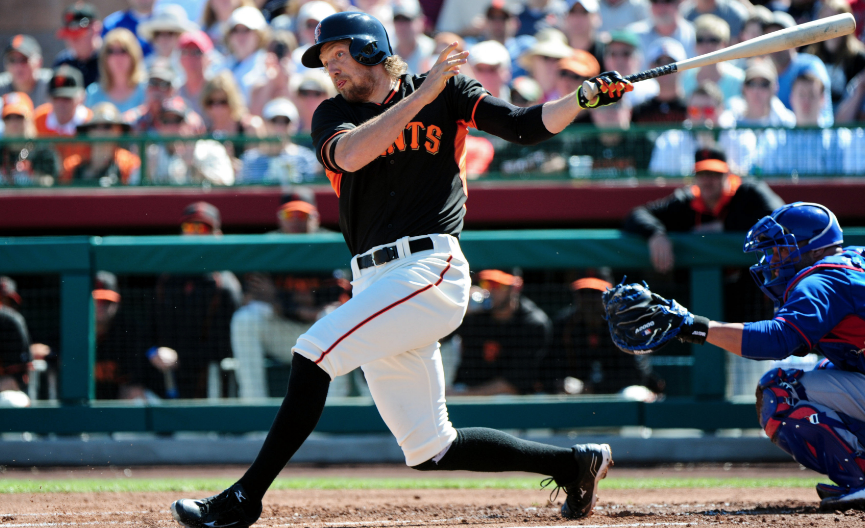 It was a joyful, sunny dream. I was in the front row at some fan gathering with Hunter Pence seated near me. He was on stage listening to speeches, wearing his jersey and for some reason he could tell I was the Greek Giant. He starts chatting:

Hunter Pence: So Greek, I need to ask you something. Are all Greek women a little nutso? I love my wife Alexis. She is wonderful but sometimes I find her a little over the top, in a fun way mostly.

Greek Giant: Hunter, How is your hamstring?

HP: Dude, really, I need your input on Greek women!

GG: Listen, I am full on Greek, both parents but I have never dated a Greek girl. Let me tell you why that is. Not only can they be a little princessy (Greek-American Princess), but they don’t get baseball. Some of them are pretty hot though..

HP: Tell me about it! You know how much time it took me to convince Alex baseball is cool?

GG: How is your oblique?

HP: Bro, enough with the health questions! I feel great. I am ready to let ‘er rip this year. I’ve had some bad luck the past two season and now people are trying to call me “injury-prone”. Give me a break man. I was the iron man for so much of my career! Now Boch is telling me he wants to baby me in Spring Training and make sure that I ease into the season. I am ready baby! Marriage has taught me one thing to be sure: Be sure to never to go bed angry and with any muscle stiffness…

GG: They say that with your wild and crazy full throttle style of play and your beautifully powerful demolition style of swinging the baseball bat that you are more prone to injury than other players.. Do you think any of this is true? Do you think you should change your style of play a bit and tone it down?

HP: Are you kidding me? Does Batman tone down his cape? Does MadBum tone down his horse riding? Please… Come on man! Come on GG… You know better than to ask me that!

HP: Cool. Tell the gang at Together We’re Giants that I’m going to play 150 games this year. Tell them I said so and tell them to go easy on the political comments… They make my brain hurt. It’s all about baseball baby!

So, yes, last night I dreamt about chatting with Hunter Pence and worrying about his health. When I read yesterday that he has a mild “tweak” on his oblique it immediately set into motion some serious sub-conscious worrying in my world… So much so that I tossed and turned. The Giants do not have much margin for error in their line up. Hunter Pence is one of the central components of their offensive production. After all the games he missed due to injury the past two seasons and with the news of another injury concern going into the first day of Spring Training…. well, I just don’t want to think about it.

Please Hunter, be healthy and play a full season!