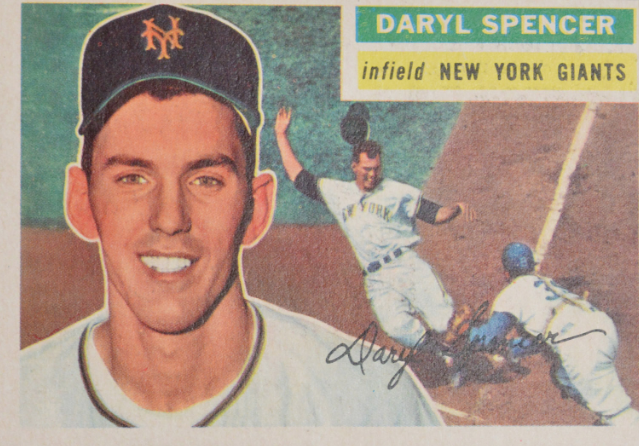 Daryl Spencer was not a great Giant simply because he hit the first home run in San Francisco Giants history at Seals Stadium on April 15, 1958 or because he was a fine infielder. He was a great Giant because he played the game “the right away”, which usually translates as: tough, hard, all-out, and with a strong sense of right/wrong with regards to the codes and protocols of the game. These include honoring your opponent and never showboating.

Spencer was a product of his time (the 1920s) and place (Kansas) more than most. The lovely column by Bob Lutz at kansas.com illustrates these traits more fully.

Spencer was that Midwesterner with a classic, American pastoral background that combined a strong mouth with a strong will. The Lutz column includes some excellent anecdotes and quotes from Spencer’s daughter, Kari Sue Vosburgh:

Dad was a Giant at heart. When he was traded to the Dodgers, he told us that he sat outside that locker room for 15 minutes before he could go inside. But then he met Sandy Koufax and the other players and it was fine.

He did hate (Dodgers manager) Walter Alston, though. He thought he was an idiot. Try as she might, Vosburgh rarely could get her dad to bite his tongue. He said what he thought and what he thought wasn’t always complimentary.

He sounds like exactly the kind of guy I would have loved to play with. He sounds like the old-school, 1940s version of say, Matt Duffy! Spencer missed two years due to service during the war and by all accounts, was a fine teammate and a productive player.

Andrew Baggarly’s column on Spencer’s career contains some nice tidbits and this excellent quote by Spencer himself talking about the time he first made the Major Leagues:
The rest of the guys I was with looked around for a minute and then went to the clubhouse,” Spencer said. “I stood there for maybe five minutes and got tears in my eyes. And I thought even if I never played a game, I was here, where I dreamed of being.