Surf Maui Guest Post: How I Met Kruk and Kuip and F*CK the Dodgers 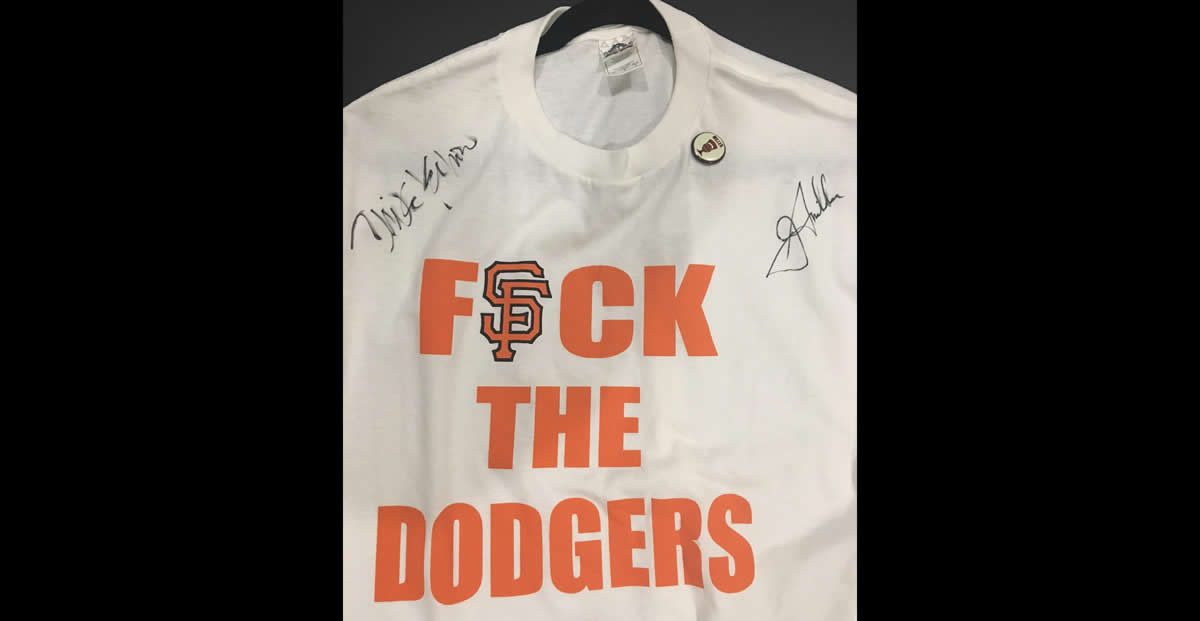 As anybody who has been to ATT Park or Candlestick before that, especially when the Dodgers are in town, there is no shortage of entrepreneurial vendors on the streets hawking t-shirts or other Giants stuff often with far more clever or off-color messages than can be had in the ball park.

So one day walking on 3rd Street from my hotel to the ballpark to see the Giants crush the hated Dodgers I came upon the above T-shirt. Even recognizing that the places where I could wear or even display it were limited, the T-shirt and its message was something that conveyed my feelings precisely, and I just had to have it.

Fully aware that the t-shirt would not likely pass muster for admission to the ballpark, I kept it in my backpack until I reached my seat in the Club Level–fortuitously just below the broadcast booth. I donned the shirt and looked up toward the booth. Just before security came to evidence their displeasure concerning the not too subtle and non family friendly message conveyed by the shirt and ask (more like demand) me to take it off, Mike Krukow saw the shirt and gave me a thumbs up sign, telling me “Nice Shirt.” Notwithstanding the fact that technically it did not use any foul language, my protestations concerning the appropriateness of my attire went unheeded, and the offending shirt was removed.

Kruk, with Hall of Fame Broadcaster Jon Miller seated beside him was taking all of this in, so naturally I asked them to autograph it. They were getting ready to broadcast so Kruk told me to go to the press entry door after the game and he would sign it. When I did so, they guard would not let me in or bring the shirt to him, so disappointed I returned to my seat in front of the booth. While they were in a break getting ready for the post game wrap (Giants beat the Dodgers, of course, duh) I managed to once again catch Kruk’s eye. (Perhaps my hangdog, pathetic little boy look worked).

I quickly explained my dilemma, and Kruk told me to hand up the shirt. I did so with a Sharpie, and both he and Jon Miller signed it. I put the Jon Miller HOF pin giveaway–not sure if it was that night or series– on the shirt. It now hangs in a hallowed place (more about that in a future post) where I can’t show it to my grandchildren or my niece or nephews kids. So those of you reading this blog–together with Jon Miller, Mike Krukow, and a security guard at ATT Park are among the very few people who have ever seen it.

Item Number 2 is also pretty unique. It is the ball hit by Barry Bonds for his 725th home run. Considering that there have only been 122 balls hit for home runs beyond 700, and I doubt that many of the 14 that Babe Ruth hit are still around, this ball is somewhat of a baseball rarity. When I saw it at the Giants game used store it was something I had to have.

It sits with my collection of Giants Hall of Famers signed balls (more about those in the future), my Ralph Branca-Bobby Thomson signed ball, and the first foul ball I ever caught– off the bat of Jeff Kent in the 6th inning–of  the next to the last night game ever played at Candlestick Park.