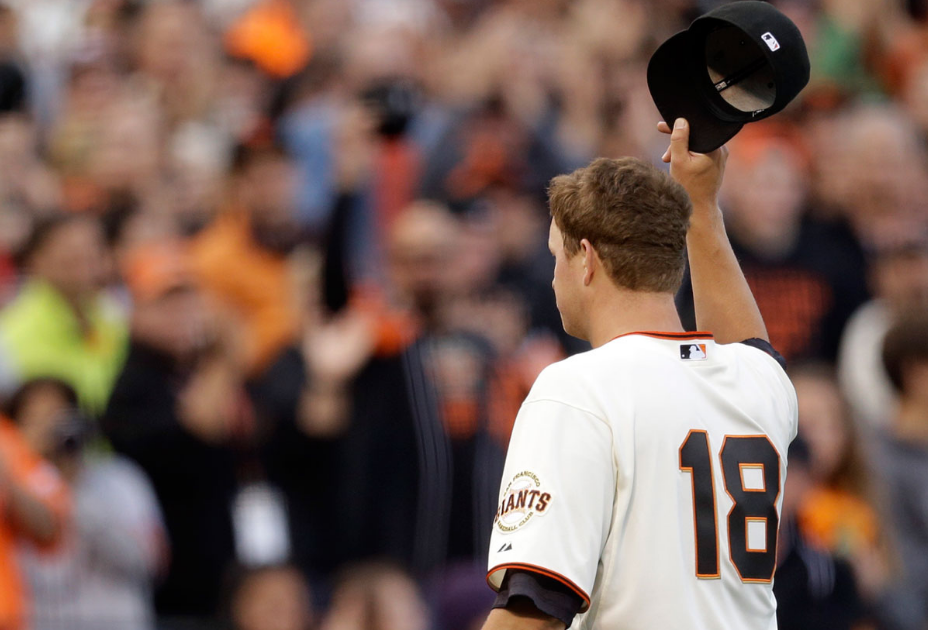 Ummmm. That was kind of funny. The Giants won a tough game, coming from behind and winning in the bottom of the ninth inning on a cannon blast by Pablo Sandoval. Please raise your hand if you saw that coming going into this season!

The Giants finished with 98 losses and really, if you take away about 45 of those losses they were right in the thick of the pennant chase…

Johnny Cueto says he will not opt out, surprise surprise.

But really, the story of the weekend is Matt Cain:

Matt Cain was in many ways the heart and soul of the Giants. The Horse was the bridge from the Barry Bonds era to the 3 in 5 era. He is more than a great pitcher. He is more than a classy athlete who has the respect of his entire sport, manager and teammates. Matt Cain represented the beginning of a new era of winning, of success for the San Francisco Giants franchise. He was the mentor to Timmy though he was often over-shadowed by his fellow teammate who won two Cy Youngs and had the flashy delivery. Matt Cain was the forgotten hero in the 2010 World Series. There was no suspense surrounding his 2010 postseason starts. He was a lock and the Giants won all of them.

There was the perfect game.

Then there was the 2012 postseason where Matt Cain started and won every clinching game, from the Division Series to the LCS and the World Series.

Matt Cain was a class act through and through. He was gritty, tough, humble and always maintained his dignity. He was the rare athlete you can point to and tell your son: “Watch him. Watch how hard be plays. See how he acts like he’s been there before? That’s the way a champion acts.”

For my money, what separates Matt Cain from so many other athletes and what makes him a great Giant is that he never wanted to wear another team’s jersey. That kind of loyalty and pride is almost nonexistent in today’s money and me world.

Matt Cain is the type of guy you want to play for. He is the type of guy you want on your team and the type of ballplayer you want to go to war with. People who criticize the Giants for giving him that big contract when they knew his elbow was already getting a little gimpy don’t understand how the culture of sports and how the “specialness” of certain athletes transcends baseball statistics. Matt Cain deserved every penny of that contract for being the shepherd that led the Giants to new territory and un-paralleled success in San Francisco. These achievements, and the memories that come with them, are priceless.

Here is Matt’s “Thank You” to the Giants, the fans and all the people in his life. It’s a must- read and I guarantee you it will bring tears to your eyes like it did to mine.

Matt Cain will always be #forevergiant.