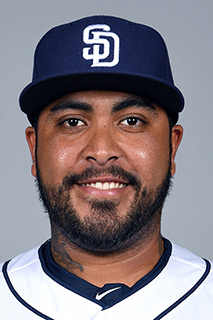 Since leaving the Giants after 2015, Hector Sanchez is now 6 for 12 with three home runs against them…and that doesn’t count a homer he hit a few weeks ago against another former teammate, Sergio Romo. Some might grumble that he never hit like that for the Giants, but I actually remember that Hector had a knack for coming up with the big hit, especially as a pinch-hitter. I remember one in extra innings in Milwaukee during his rookie year, a walk-off hit vs. the Dodgers on Jackie Robinson Day (also in extras), a dramatic three-run homer with two outs and two strikes in the ninth for a comeback win in D.C….anyway, good on ya, Hector. It stings a tiny bit less losing to an old friend. Hector was a good Giant, and you could argue that Buster Posey owes a sliver of that 2012 MVP trophy to him.

What were you expecting from him last night? Was part of you remembering that he got knocked around in A ball just 10 days ago?  Maybe some shaky command, struggling to get through innings?  Well, there was none of that. Bum struck out the side in the first inning–usually his toughest inning–to put an exclamation point on “I’m Back!” He worked efficiently and looked like his old self. It was too bad about the two homers, especially the one to Blash that gave up the lead, but overall, I thought it was a great first outing back for him.  One of the beat writers noted that only once in the last 15 games had a Giants starter gone seven innings.  Bum now has five quality starts in five appearances this season…

…and the Giants are 0-5 in his starts. That’s why, at the end, you can’t get TOO mad at MadBum. It’s possible and even likely that their record would have been pretty much the same with him as without him.  Anyway, what’s the old line? “Coach, how do you feel about the execution of your offense?”–“I’m in favor of it.” (“Execution…” get it?) The Giants had Jhoulys Chacin on the ropes in the first two innings–base runners everywhere, pitch count mounting. Then they got two runs and the good ABs went away.  Crawford had a leadoff double in the third and then nothing but a two-out walk until Panik’s homer in the sixth.  The last three innings seemed over in the blink of an eye.  And there you have it.

The Padres may be bad, but they do have youthful energy and exuberance. It’s nice to see, really. Padres fans are their usual friendly, relaxed selves. We’ve been to Petco to see the Giants on six different trips now, dating back to 2006 when Bochy was still the manager in San Diego. It’s the same every time. I highly recommend this as a roadie.

Apologies for fewer pictures and live links this weekend. I can’t seem to get the links working when posting from my iPad, and it’s harder to edit screenshots, too. We’re off to Game 3 this afternoon and then to the airport to get back to our dog and the real world. Lefty out.