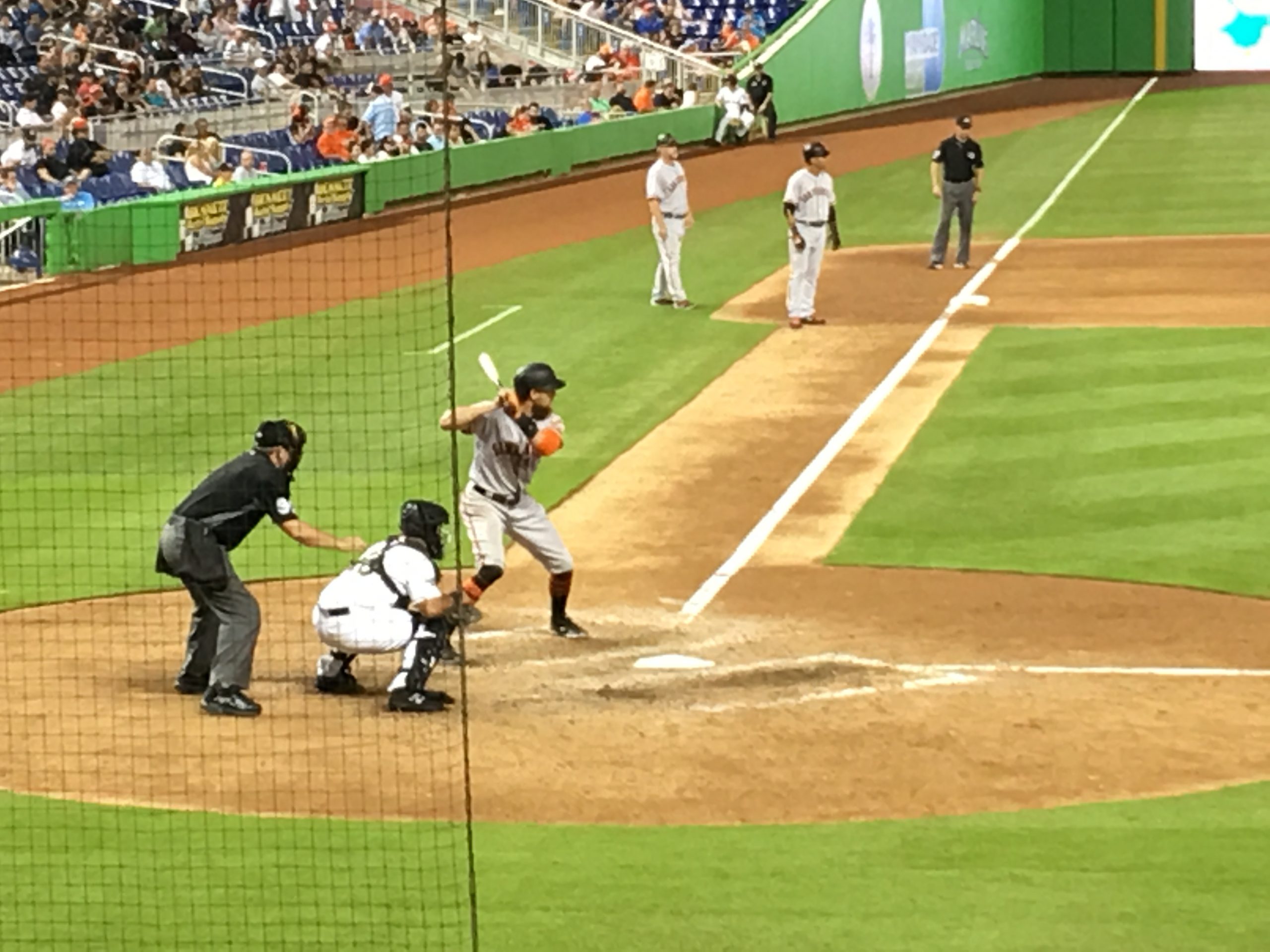 Let me get this out of the way: Giancarlo Stanton is a beast of a baseballer. His physicality, lightening quick swing and monstrous power make his at-bats a must see viewing experience. He towers over his opponents in more ways than one and he is on his way to becoming a Major League and Miami Legend. Last night Stanton pulverized a Madison Bumgarner pitch in the first inning. He hit the ball so hard, a line shot to left that got to Jarret Parker so quickly, Stanton could barely get a single out of it.

The contact ricocheted through Marlins Park and sent a shockwave of thunder across Miami.

Words cannot describe his home run in his next at-bat. To say it was pulverized would be an understatement. It wasn’t just that the ball traveled about 490 feet on a straight line on the way to Havana. It was the majesty of the flight path, the quickness of its exit from the field, etc. That was a home run that had to be seen to be believed, the type of hit that you recount to your grandchildren.

MadBum was not pleased, staring the Marlins slugger down as he rounded the bases. I was expecting fisticuffs. It was great baseball theater.

That homer, his 44th, was Stanton’s 23rd blast in 35 games. Think about that for a second Giants fans.

Marlins Park is not even a hitters’ stadium. The Marlins right fielder may be on his way to an MVP season.

It was, fatefully, Stanton who would figure in a key play however in the rally that would score the eventual winning run for the Giants. His throw sailed over third base in the top of the 7th and allowed Denard Span to score to put the Giants ahead. The Giants were very aggressive all night on the bases and that aggression contributed to the Marlins throwing the ball all over the place.

But the story of the game was the Giants hitters. Bruce Bochy did not exactly send out a team of illustrious mashers while the Marlins were mostly at full strength, minus their slugging first baseman Justin Bour.

What the Giants did was respond. It was a game where everyone but Sandoval and Crawford notched a base hit. Denard Span had a huge game with a two-run home run in the third inning. He also scored 3 runs had 3 hits and made some great plays in center running down a variety of smashed balls in the grand canyon of Marlins Park’s outfield.

Hunter Pence hit a big double to drive in a run and added another run-scoring ground out.

It was that rare game where the hitters bailed out their ace who was getting hit hard. Even the outs Bumgarner was inducing were Peter Johnson (Loud Contact). MadBum was fooling nobody but he did manage to limit the damage in the first and fifth innings, showing a gritty and determined nature that kept the Giants in the game. Giants fans should be a little worried about the Ace’s lack of velocity, never reaching 91 but there is no doubt that Bumgarner is the heart and soul of the Giants and it is no coincidence that the team is playing much better since he returned from the disabled list.

The Giants offense owed MadBum a win like this.