I Blame You Manfred: Your Stunts are Ruining Baseball! 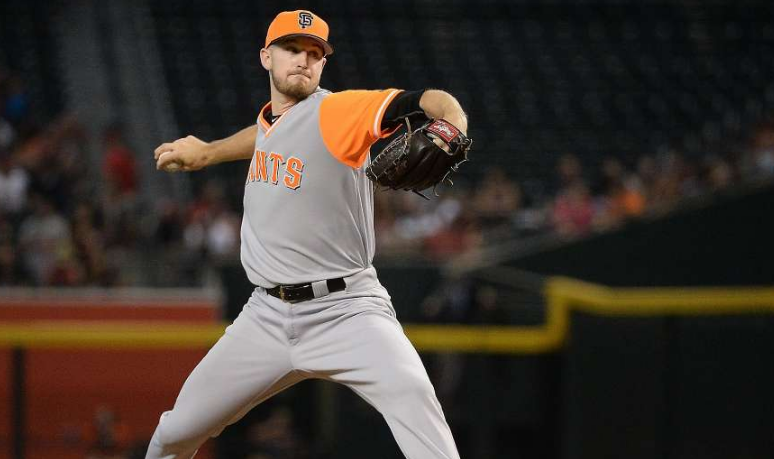 When the Diamondbacks scored nine runs in the bottom of the 8th inning yesterday and made the game a track meet for snakes, my attitude was basically: “yeah, whatever. I would rather lose by 11 than 2.” Chris Stratton was dazzling again, for his third straight start. He is raising my eyebrows, and one would presume, those of the Giants coaching and front office staff. His fastball, his curve and his competitive fire that challenges hitters on the inside part of the plate and refuses to give in, all may mean the Giants have a legitimate home-grown starting pitcher to add to the staff or use as trade-bait for next season.

No need to talk about the lack of hitting in the series. The Giants scored a total of 4 runs.

Now, let’s talk about the abomination known as “Player’s Weekend”. It sounds like a cheap getaway in Las Vegas for a beer league softball team. In fact, the “special” jerseys worn by the team across MLB were basically an abomination of bad design and a degrading, demeaning, debasement of baseball’s dignity in more ways than one. The stunt was a hideous series of failures in vision, leadership and uniform design and not befitting of the National Pastime.

Forcing the Giants, Yankees, Dodgers or Cardinals to wear these disgusting excuses for uniforms only signifies how dangerously out of touch Manfred and his ilk are. In their lame and desperate attempts to youthify baseball’s fans they are alienating baseball lovers of all ages. Baseball is an essentially conservative and tradition-laden sport, for better and for worse (in my opinion it’s mostly for the better). What makes the game so great is the constancy of the statistics, the rules and the traditions of many teams when it comes to their color schemes, branding and uniforms. While the Giants and others have alternate jerseys and various attempts at cash-grabbing merchandise promotion, their iterations of different uniforms are always in line with the traditions of their history and stay within the color schemes and logos of their past. That’s an essential part of their greatness as an organization: that they value their history.

The outlandish outfits and caps worn by the team this past weekend were nothing short of a disgrace and made me want to listen to the games on radio instead of watching them on television. There is no need for me to deconstruct the stupid shade of sherbet orange or the amateurish styling of the sleeves and patch. What is alarming for this baseball fan is how much Manfred has cheapened the game in attempts to make it more accessible or “fun.” The talk of stupid rule changes only makes things more alarming.

It’s time to petition the Commissioner’s office. Enough is Enough with this stupidity. If you want to make gimmicks like player’s weekends or All Star Game home run derby contest uniforms then at least have the decency and respect to design uniforms befitting each team’s identity.

Get ready for ads on jerseys a la European Soccer. They are coming and it will be a sad day in baseball when that happens. This weekend only heightens my fury at the realization that nothing is sacred in American sports. All traditions, all sense of dignity can be sold for a few more bucks.