MadBum Slays the Cubs Dragon for Second Win of the Year and Series Victory, 3-1 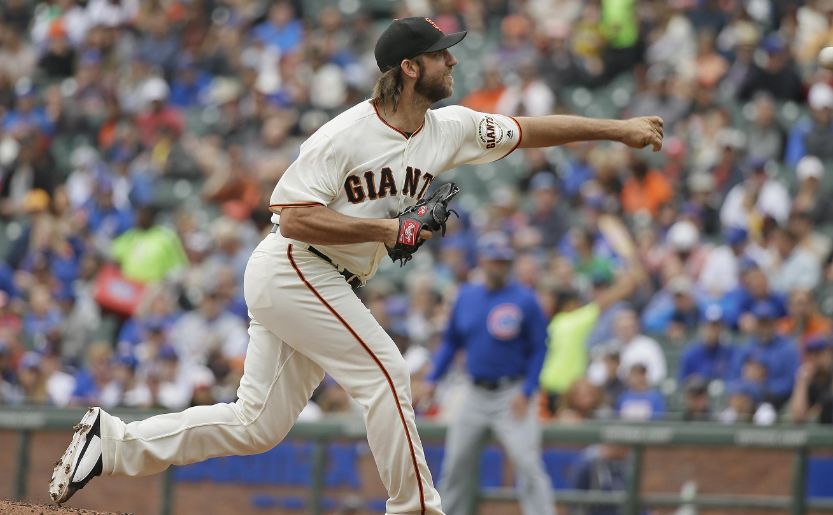 Madison Bumgarner won his second game of the season thanks to a superb 7 innings, one run performance and an RBI single in the bottom of the 7th by Jarrett Parker. Hunter Pence slaughtered a baseball over the right field wall in the bottom of the 8th inning to give the Giants a cushion.

That makes two series wins in a row for our boys, after taking 2 of 3 from the dreaded Arizonans.

The Cubs looked a little bit funky, as if the West Coast fog was in their heads and not in the air over San Francisco. Watching Kyle Hendricks pitch was an exercise in existential dread. A graduate of the Ryan Vogelsong grind, pause, grind, grind, pause then pitch school of pitching, Mr. Hendricks appeared to be suffering on his way to agonizing the entire crowd at Willie Mays Field in the process.

Here was exhibit A of baseball’s tempo problem. While I am not a fan of the stupid clocks that count time between pitches and innings in the parks, I believe Major League Baseball would do well to learn from professional tennis and warn pitchers who take too long between pitches. After one warning, the batter is given a ball, second infraction, he takes first, third infraction and the pitcher is ejected. The Umps could keep time privately and limit the seconds between each pitch to no more than 15-20.

Hendricks did his best to upset the Giants hitters’ timing and wrest control of the game without his best stuff, much like say, oh… Corey Gearrin…or Ryan Vogelsong. It has to stop. It is torture to watch and harms the flow of the game.

Madison Bumgarner, on the other hand, was a joy to watch: smooth, efficient, and up-tempo, like a nice Miles Davis tune on a summer evening.

Watching MadBum is an illustration in winning pitching: throw strikes, vary eye levels, pitching inside and outside, hiding the ball till the last moment with his delivery, and keep up the pace to keep the team focused.

The Cubs had no chance.