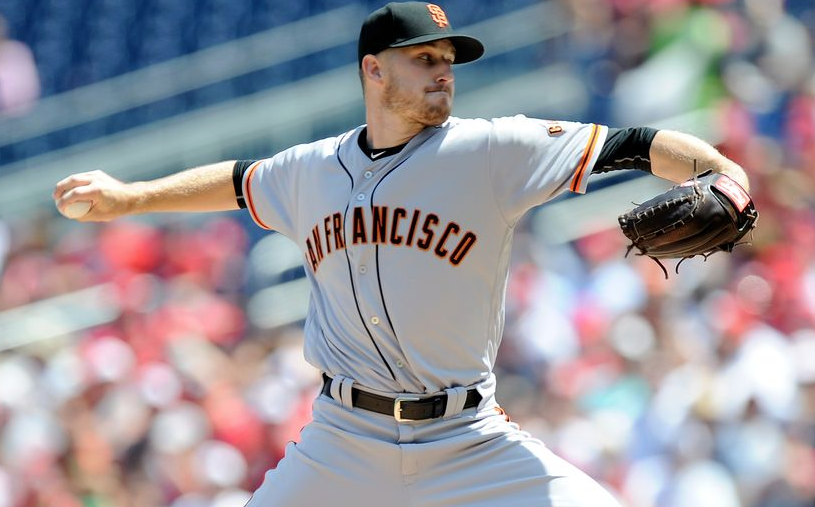 The Giants played three games in the Denard Span of 24 hours, losing the finale 6-2 in 11 innings on a walk-off grand slam by Howie Kendrick. In the nightcap of the doubleheader Matt Moore pitched one of the best games of his disappointing season, matching Max Scherzer by allowing only 2 runs in 7 innings.

Pablo Sandoval hit a home run off Scherzer into the upper deck just inside the right field foul pole. It was a Ruthian blast that tantalizes and teases Giants fans who have visions of the Panda returning back to his 2012 World Series MVP form. Unfortunately, his pop up in the ninth with runners on first and third and one out, was not enough to get the runner home and the game would go to extra innings. The Giants were in position to win that game thanks to the scintillating base running of their second baseman who scampered to second on a ball that just barely escaped the Washington catcher for a wild pitch. Panik then tagged up on Pence’s fly ball to right to get to third, where he would eventually remain.

In what was one of the strangest, most improbable and downright weirdest plays you will ever see in a baseball game Joe Panik was thrown out trying to score from second base when Michael Taylor’s throw caromed off Matt Wieters’s mitt, then careened off Joe Panik’s head as he was sliding, then bounced right back into the Washington catcher’s mitt for an instantaneous tag a millisecond before Joltin’ Joe would have scored the game-winning run. Wieters didn’t even know he caught the ball and tagged the runner out, such was the strangeness and unpredictability of the play.

Hunter Pence drives in a run, but Joe Panik takes a hit to the face sliding into home and exits the game. pic.twitter.com/FvNd5OkDWO

Joe Panik was visibly shaking off the cobwebs later in the game and should have been removed. Despite the injury he managed to be the Giants best hitter in the series and gave a personal demonstration to the silly little TWG people who randomly think it might be a good idea for the Giants to trade him.

Thank you Joe. I needed that.

In Game 1 Chris Stratton was marvelous, shutting out the Walgreens in 6 2/3 strong innings with ten strikeouts. His stuff was downright electric and his command was even better. Mixing his slider, cutter and fastball with such unpredictability in all quadrants of the plate plane, the powerful Washington line up could only muster a two-run bomb by Giant-killer Anthony Rendon off Hunter Strickland in the 8th inning to make matters interesting for a moment. It was only a moment as Sam Dyson, the find of the season for the Giants, pitched a clean ninth inning for a smooth save that allowed me to get quickly back to my cooking for the Sunday family dinner.