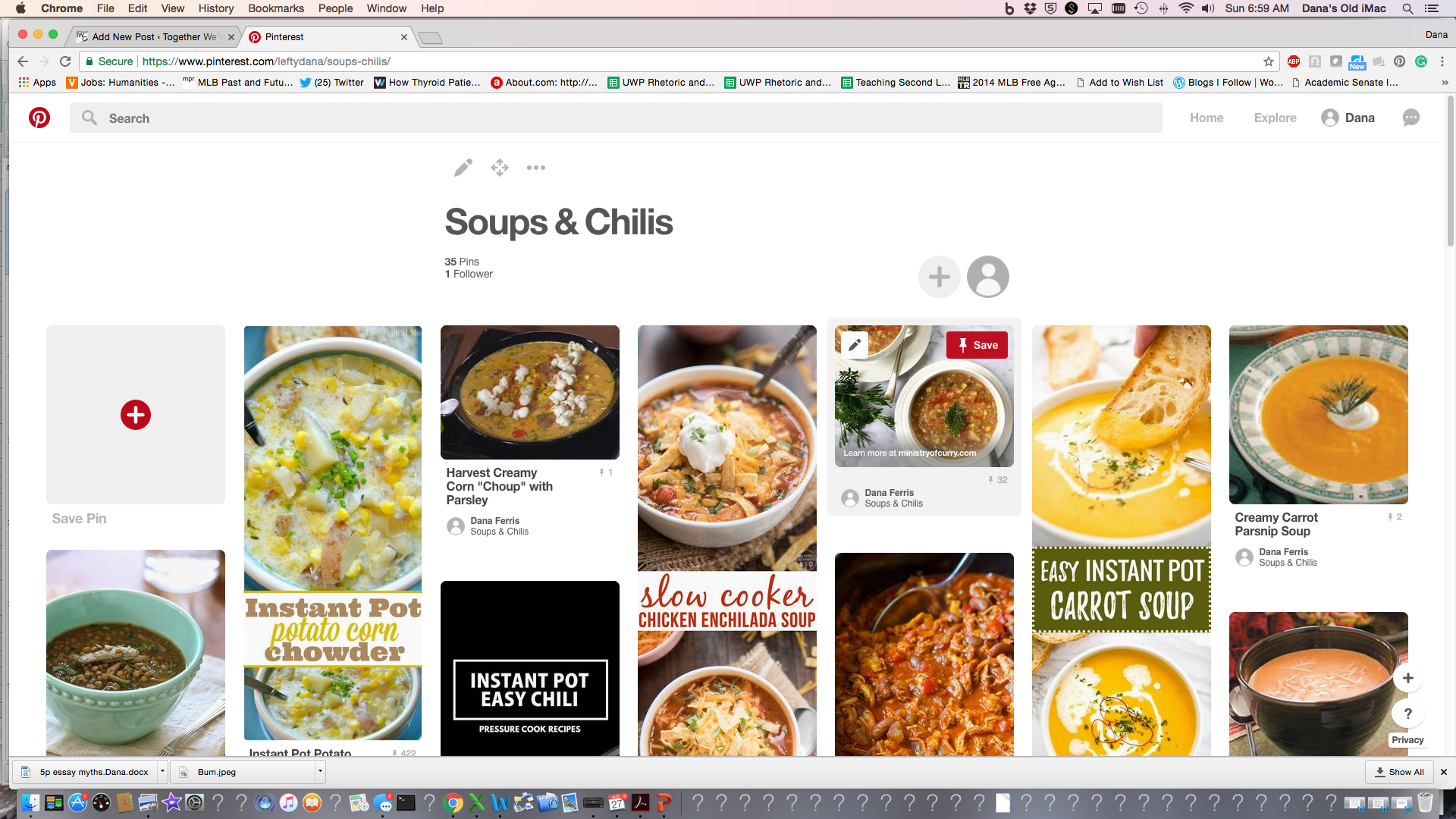 I know y’all hope for a nice, lively blog post from me on Sunday mornings, but that game was…well…I got nothing.

OK, not entirely nothing. The photo up top is of my new Pinterest board I made during the game. Fall is coming and I want to try some new soup recipes. (If you have any you like, send ’em my way. No cheese and no sesame.)

All right…sigh…I’ll talk about the game.

It tells you everything you need to know about this game that all the beat writers’ stories revolved around a called third strike…in the seventh inning…to the pitcher. Yes, it took the bat out of Bum’s hands with two on and two out, and yes, he’s a good hitting pitcher, and yes, he did this off the Dbacks’ pitcher, Chafin, on Opening Day.  (Damn, he really did kill that ball.)  But when the Giants’ chances in a game pitched very well by their ace revolve around a two-out Bumgarner AB, that’s really the story–the brutal lack of support they’ve given that ace.  It’s the worst I’ve seen since 2011 when Tim Lincecum finished fifth in the NL in ERA and sixth in Cy Young voting–and had a losing record at 13-14. Anyway, after the game, Bumgarner was asked about that called third strike that ended his AB, since computer evidence clearly showed it was a (very) bad call by home plate umpire Jerry Meals, and Bum was quite vocal in his opposition to technology (no “stupid electronic strike zone” for him).

Since it was really the only good moment in the whole game for the Giants, I’ve gotta link the video. It was high and it was far. When he hits one, they stay hit.  The triple was nice, too. Parker can run pretty well. He’s had a nice month with an .826 OPS–too many strikeouts, but all the cool people strike out.  It’s also been a breath of fresh air seeing a major league competent outfielder play the outfield. I know the bar is extremely low when it comes to Giants’ outfielders, but Parker’s done a better job than I thought he would. Wish they’d let him try center field for a few games in September.

Yes, he gives up too many long balls (but again, there are a lot of ’em being hit in baseball this year). I basically agree with Bochy’s postgame comment that when you hold a good lineup like that to two solo home runs in a live park, you’ve done your job. In Baggarly’s postgame article, he had some interesting quotes from Bum about the two pitches, which Baggs characterized as “miscalculations” rather than “mistakes” (meaning that it was the pitch selection and not the execution that didn’t work out).  Anyway, Bum did his job, and he definitely looks like his pre-accident self. That’s a relief.

I think of Arizona as a lineup full of sluggers without much pitching except for Greinke, who’s returned to form this year. But that’s wrong. The Dbacks are second in the NL and third in the majors in team ERA. They’re actually only middling in terms of their team offense (though I think adding J.D. Martinez in July changes that calculation–it’s a hard lineup to navigate now for a pitcher). The Dbacks’ season is going under the radar because they’re in the same division with the Dodgers, but it’s really impressive how they’ve turned things around. I’d say that Torey Lovullo should be a leading candidate for Manager of the Year. (Obviously Dave Roberts could win it again, but on the other hand, the Dodgers were expected to be a dominant team before the season. Often that award goes to a manager who overcame adversity and/or whose team surprised people.) If Greinke can get them through the wild card game (and I remember him being nails in the playoffs when he was on the Dodgers), the Snakes could give the Dodgers some trouble in a five-game series.

Before the game last night, I had a list of “modest goals” after the really irritating loss on Friday. The Giants pretty much hit all of them.

OK, maybe one hit for Craw isn’t entirely “stay hot,” but considering that the Giants only got five hits from three guys, close enough. Otherwise, they checked off my boxes. Notice that “win the game” and “score runs” were not in my “modest goals.” That’s why they’re “modest,” see?  I’m not sure whether I think that an irritating game full of bad base running and defense (Friday’s game) is better or worse than a boring game where the most exciting moment was Bumgarner politely disagreeing with Jerry Meals after a called third strike.  But that’s how 2017 has been–either incompetent or flat-out dull or both.

It would be nice if they could avoid getting swept today. Stratton did a decent job keeping them in the game when he faced the Snakes on August 5. At least with a lefty starter going for the Snakes, maybe we’ll get the Gorkster in center today (“modest goals”).  Sighhhhhhhhhh, and Lefty out.