Collusion or Collision? Thoughts on the Strangest Offseason Ever 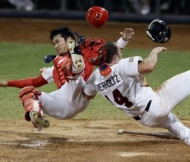 As the weeks and months crept by, the theories kept changing. The market will pick up after Stanton is traded…after Ohtani picks a team…during the Winter Meetings…after the holidays…after the Marlins and Pirates trade some guys…after the first big free agent signing (it was Lorenzo Cain, nine days ago, by the Brewers). Well, it’s February now. What’s next, “after the Super Bowl”?

Pitchers and catchers are scheduled to report in ten days. There are still, depending on how you count, somewhere between 50-100 unsigned free agents. And they’re asking themselves now: What if the market never picks up?

It might not, you know. Oh, Yu Darvish, J.D. Martinez, Jake Arrieta, and Eric Hosmer will be employed before Opening Day and likely before camps open. But what about the others?–to pick a few random names from the MLB Free Agent Tracker–Cameron Maybin, Andre Ethier, Ubaldo Jimenez, Francisco Liriano–and those are the guys you have heard of. There are so many more, and they’re not all over the hill (or 30), either. Plenty of guys in their 20s if you scroll down that list.

The assumption all along has been that once the free agent dominoes start to fall, the “losing” teams in the Darvish/Martinez/Ohtani/Stanton sweepstakes would grab their Plan B guy, and the market would correct itself as it always does. But what if it’s changed right out from under those free agents? And why has it changed?

Merriam-Webster defines “collusion” as  “a secret agreement or cooperation especially for an illegal or deceitful purpose.” If the owners secretly got in a room or on a conference call or a group chat and all made a pact to not sign big free agents and drive prices down, that would constitute collusion and would be subject to a union grievance or a lawsuit. But there is no evidence that’s happened. What has happened is as simple as these two words: common sense.

The social contract was stupid, and the owners decided not to play the game anymore

Everybody’s known and accepted it for years. Yes, Team X paid way too much for way too many years for Barry Zito/Jayson Werth/Albert Pujols/Josh Hamilton/David Price/Zack Greinke (etc.), but that’s the price of doing business. To be competitive, you have to throw huge dollars at the game’s biggest stars, knowing full well that the back end of their contract, the declining years, is going to be a loathsome albatross. Yet you keep doing it because that’s how it’s done.

This tacit agreement didn’t make the owners happy (for obvious reasons), and it doesn’t make the fans happy, either. What do you suppose Together We’re Angels thinks about the Pujols signing? Did we enjoy the final years of Barry Zito? Will we enjoy the final year of Hunter Pence? It probably doesn’t make most of the MLB players happy, either. $200 million thrown at Mr. Big Shot means Mr. League-Average won’t get $20 million and might not even get $2 million. Yes, the owners are rich, but that doesn’t mean their resources or willingness to spend are infinite. So at some point, and this year seems to be it, the owners said enough is enough.

A lot of teams are sitting this one out, for various reasons

I’ve written about this here before: We have the lethal combination of several usually big-spending teams deciding to get/stay under the Competitive Balance Tax (CBT) limit of $197 million, many teams deciding not to spend on free agents at all–basically, choosing not to be competitive, especially after seeing the success of the Astros after doing exactly that, and a flawed and shallow free agent pool. Let’s look at each of these briefly and see whether they are real reasons for the unprecedented glut of free agents.

No fan, he thought, should be deprived of the spring training dream. After owners of rich teams agreed to share some of their money with owners in smaller markets, Selig believed, every fan could see pitchers and catchers report to spring training and wonder if this could be the year. The chance would be better for some teams than for others, but at least there would be a chance.

Spring training opens in two weeks, and hope and faith is dead all across America.

My take on this: It’s a dangerous game. It paid off for the 2017 Astros, as former first-round picks Carlos Correa, George Springer, and Alex Bregman helped them to a championship. But let’s look at a counterexample: The Washington Nationals. They had five top-ten picks between 2008-11, including two in 2009 and two #1 picks (Steven Strasburg and Bryce Harper). Those two #1 picks, along with first-rounder Anthony Rendon, have become the core of an excellent team–that has yet to ever make it out of the first round of the playoffs. Bryce Harper is 25 years old and already on his fourth manager. So there are no guarantees. Building a champion is more complicated than just getting top draft picks. And you can alienate a fan base beyond repair in the process. I remember reading, somewhere around 2013, that the Astros’ TV ratings were literally zero. A formerly passionate fan base in Philadelphia is now disgruntled and cynical.

3. The rise of analytics: Every team now has access to the same data, and every front office has geeks, I mean experts, who can explain what it all means. Ways of valuing players have become standardized across the league, so no one is jumping in and deciding with their heart instead of their head. This means that no one’s going to overpay for J.D. Martinez’s home runs and ignore that he’s a defensive liability and no one is going to pay Hosmer extra for his “intangibles.” The old ways of arguing for players have fallen out of favor in more ways than one. In particular, this seems difficult for uber-agent Scott Boras to adjust to.

4. Worship at the altar of the young player: In the post-PEDs area, younger is better. Younger is also cheaper. As a result, not only are teams choosing to promote their own players rather than signing free agents, but they are also holding onto their best talent in trades and refusing to take steps that would cause them to lose draft picks and bonus money.

All of this is to say is that rather than “collusion,” there’s a collision of factors that have led to this highly unusual set of circumstances that we find ourselves in on February 3. I doubt the players will really boycott spring training, but it’s clear that tension over the current state of affairs is spilling over into unrelated issues such as Manfred’s pace-of-play proposal. When management and labor collide, it’s not always about who is “right” or what is “fair,” as “right and fair” are in the eye of the beholder. Sometimes you can “win” a battle but lose a war in terms of trust, respect, and mutual cooperation for the good of all. MLB and its players are at an interesting tipping point, and it’s too soon to say how it will all play out.

As for our Giants? They’ve spent modestly on free agents (Hundley and Jackson plus some minor league deals to old friends Gregor Blanco, Chris Heston, and Hector Sanchez) and taken on money through trades (while also offloading some). Are they done spending and acquiring? Common sense would say yes. But the current market does present some unique opportunities for a team that’s, right or wrong, decided to compete in 2018. We shall see. In the meantime, enjoy Super Bowl Sunday. My head is immediately into baseball season the minute football ends. Lefty out.