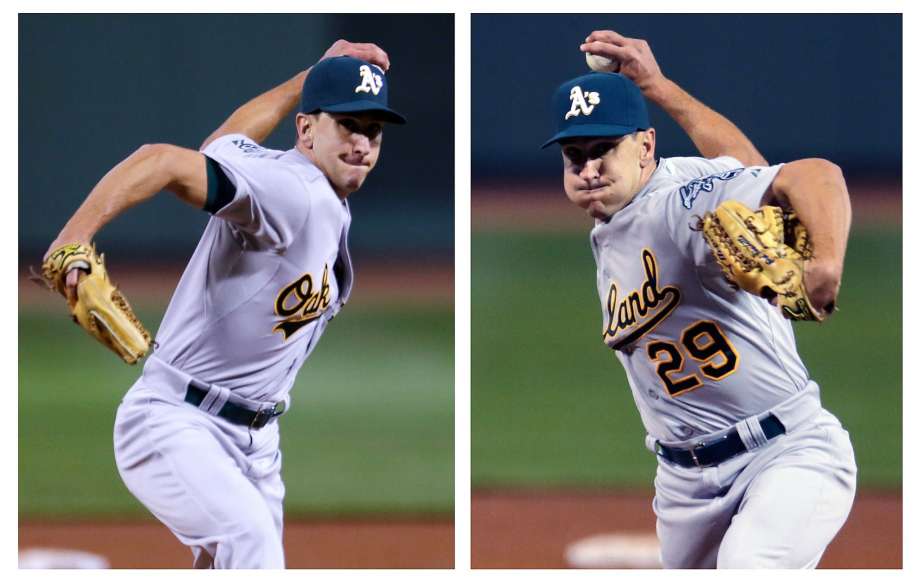 If I thought last week was a nothing burger, this week was…yeeeesh.  The Giants signed Pat Venditte to a one-year major league deal for $585,000 and negotiated with the Oakland (for now) Raiders to let them trample and trash AT & T Park in 2019.

Raiders at AT&T Park? Giants fans should revolt at the very prospect.

That’s it. That was the extent of the Giants news this past week.

Oh, Gregor Blanco caught on with the Mets on a minor league deal, and I know we’re all rooting for him to get to his ten-year service time mark (he’s just beyond eight years now). For the record, I have no problem with the guy who saved the only perfect game in franchise history and was a starting outfielder in two World Series being known as a “Forever Giant.” I’m thinking “Good Giant” and “Forever Giant” need to be two distinct categories with clear boundaries.

OK, let’s talk about Pat for a minute

Venditte is an interesting novelty pick-up because he’s a switch-pitcher.  He’s 33 years old and has pitched for the A’s and the Dodgers (among others), two teams that should ring a bell for Farhan Zaidi.  Since we know Dr Z is all about roster flexibility, what could be more versatile than one guy who can fill two bullpen roles…in the same inning? Not only that, but he still has a minor league option, and we know from watching  Zaidi’s Dodgers these past couple years that they like to shuttle guys between AAA and the majors: per Alex Pavlovic, Venditte was called up eight times last year, and that has got to be a record of some sort.  With the Giants’ AAA team being just 80 miles or so up the road from AT & T Park, Zaidi will be able to use the AAA shuttle bus even more (compared with the Dodgers, whose AAA team plays in Oklahoma City). Venditte’s major league stats are pretty underwhelming, and he’s logged a total of 64.2 innings in parts of four major league seasons. It appears that the key to this pickup is his splits against lefty hitters (even when pitching right-handed!), which are quite good. Along with acquiring lefty reliever Travis Bergen in the Rule 5 draft last week, Zaidi appears to be stockpiling lefty relievers. More on this in a minute.

He’s also, oddly, stockpiling guys who played for Creighton University (Omaha, NE). Mike Gerber, acquired off waivers a couple weeks ago, also played for Creighton, and he was teammates there with Giants lefty Ty Blach. I’m guessing there are no other colleges/universities that have three alumni on the Giants’ 40-man roster. So go (looking up the team nickname for Creighton)…uh…Bluejays (one word, unlike the Canadian MLB outfit).

What other teams are doing

Well, they’re acquiring guys who might have been nice trade targets for the Giants, like outfielder Domingo Santana (Brewers–>Mariners) or infielder Jurickson Profar (Rangers–>A’s). Modestly priced free agents like Trevor Cahill and Matt Harvey and Mike Fiers have gone off the board, as have pricey relievers like Andrew Miller. The relatively steep price tag even for guys like Harvey makes me wonder how much it might cost to sign Derek Holland, who had a much better year than Harvey did in 2018.

The big news yesterday was the Dodgers’ massive trade with the Reds, which involved salary dumps on both sides. Matt Kemp’s “untradeable contract” from 2011 just got traded for the fourth time (twice by the Dodgers), and the Yasiel Puig Era has come to an end, at least with the Dodgers. They also traded lefty Alex Wood.  In turn, the Dodgers took back the dead money of Homer “can’t pitch well against anyone but the Giants” Bailey and promptly released him. The Dodgers picked up a couple of prospects but nothing all that exciting, so this does primarily appear to be a way for them not only to clear cap space but also space in their crowded outfield and rotation (must be nice, huh?). What that will all mean (Harper? Trade for Kluber or for Realmuto?) remains to be seen, but they obviously have some kind of plan operating.

And the constant shuffling of Kemp proves that where there’s a will, there’s a way, even with an onerous contract. (Melancon? Longoria? Samardzija?)

Finally, though the offseason has been active, it has not been all that lucrative for free agents in terms of long-term, high-end deals, and this may well be the new normal and not just an aberration from last season.

Seven weeks into free agency, six players among the 250 or so free agents have landed deals of more than two years.

Do we have a plan, Farhan?

We are now a couple of months into the offseason and into Dr. Z’s tenure as the new boss of the Giants. So far we have seen the following happen:

It’s hard to say where all this is headed except that Zaidi seems to be prioritizing cheap, versatile, controllable assets, hitters with good plate discipline, and pitchers who miss bats and don’t walk too many. The beat writers also suggest that the additions of two lefty relievers (counting Venditte, who’s better from the left side) mean that the Giants are still hoping to shop Will Smith and/or Tony Watson for prospects, especially as pricier guys like Andrew Miller go off the board.

Giants have been waiting for Miller and a couple others to sign, opening up some opportunities to potentially trade their own left-handed relievers. (Of course, St. Louis was a rumored home for Smith.) https://t.co/YoUg4ZJNuS

All signs lead to–well, not exactly a tear-down, but not really a build-up, either. Some of the guys who have already been traded or signed could have been good bargain pickups for the Giants, too, and yet Zaidi has passed so far.

Of course, as we keep saying,  with a new regime it’s close to pointless to make actual predictions. All we can do is try to read the tea leaves, as scattered and scarce as they might be.

With Christmas upon this week, I’m not expecting much if any Hot Stove action, so I’ll have to dig (even) deeper for next Saturday’s post. Until then, Happy Festivus (tomorrow, so get your list of Grievances ready to Air) and Merry Christmas to those who celebrate it.  Lefty out.