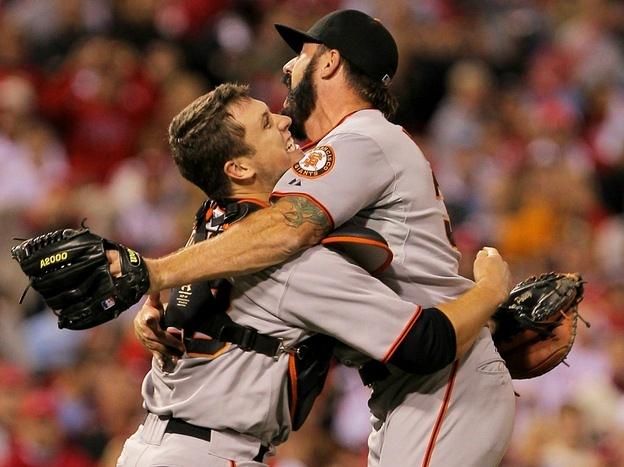 No. No, I do NOT want to talk about last night’s tire fire of a game, maybe the worst loss in a year that’s had some lively competition for that title. Here’s the link to the wrap with the box score–if you really must.

Today the Giants celebrate the reunion of the 2010 World Series champion team. If you want to talk about the 2010 season, you have to start with Buster Posey. In a sad bit of irony, it also marks the last day Buster will be with the team for awhile, as he flies tomorrow to Colorado for hip surgery on Monday.

So–Buster needs a hug. We all do.

The 2010 Band of Misfits & Their Messiah

Bruce Bochy called his team “The Dirty Dozen” and “castoffs and misfits.” They included Aubrey Huff, signed for $3 million prior to the 2010 season when he couldn’t get a job anywhere else and after Sabean had tried and failed to lure more appealing sluggers (like Adam LaRoche) to the unfriendly confines (especially for lefty hitters) of AT & T Park. Huff led the team with 26 homers and 95 RBIs that year. No lefty hitter has come close to that production since. They included Pat Burrell, dumped by the Tampa Bay Rays in May, who simply ate his sizable contract. Burrell joined the Giants on June 5 and went on to hit 18 home runs in 341 plate appearances. And Cody Ross, acquired off waivers in late August simply to block the NL West-leading Padres (yes, that was a thing) from obtaining him. All Ross did was win the MVP award in the NLCS, and if they’d had the award in the NLDS, he’d have won that, too. And the list goes on–Andres Torres, Santiago Casilla, Juan Uribe. No household names unless you consider Burrell one, as in “Lock up your daughters–Pat the Bat is in town.”

That 2010 team did have a stellar pitching staff that included Tim Lincecum and Matt Cain in their age-26 seasons, Jonathan Sanchez having his best year as a Giant, a very young Madison Bumgarner, who came up in late June, and at age 21 pitched eight shutout innings in Game 4 of the World Series, and Barry Zito, who put up nearly 200 regular-season innings as a starter but was only the fifth-best one at the end and was not on the postseason roster. The bullpen was nasty, too, with Brian Wilson tying Rod Beck’s team record with 48 saves, set-up guys Sergio Romo and Casilla, all-purpose lefty Jeremy Affeldt, and that year’s “blockbuster” trade on July 31, a lanky lefty with a funky delivery and a great strut named Javier Lopez, whom Chase Utley, Ryan Howard, Jason Heyward, and Josh Hamilton still have screaming nightmares about.

Those misfits and golden arms were floundering, though, in the early part of that season. The pitching was great, but they. could. not. hit. Jonathan Sanchez pitched a one-hitter in San Diego and lost 1-0. Duane Kuiper coined the phrase “Giants Baseball–Torture” in May of that year. So on Saturday, May 29, 2010, Buster Posey, the Face of the Future since being drafted at #5 in 2008, became the Man of the Hour. In his 2010 debut, he went 3 for 4 in a 12-1 blowout of the Diamondbacks at AT & T Park.

Posey mostly played first base during his first full month in the major leagues. Two-time Willie Mac Award winner Bengie Molina was a fixture behind the plate and had the trust of the brilliant young starting staff. They let Posey catch Bumgarner, since they’d worked together in the minors, but that was about it. Finally, Sabean traded Molina away on July 1, 2010, and the rest is history. The Giants and Posey took off that month, with Posey sporting a 21-game hitting streak and winning the NL Player of the Month and NL Rookie of the Month awards. After some bumps with the starting staff in August, the team went on a 20-10 run in September to win the NL West on the season’s final day. They were not favored to win any of their playoff matchups, but they won all of them, barely breaking a sweat: they beat Atlanta 3-1 in the NLDS, the heavily-favored Phillies 4-2 in the NLCS, and the slugging Texas Rangers 4-1 in the World Series, winning all three series on the road. They clinched the final game in Arlington, Texas, on November 1, 2010, a night no Giants fan will ever forget.

I remember during the postgame euphoria, Posey was interviewed by a Fox reporter on the field. Still just 23 years old, this brilliant rookie was able to calmly answer questions and manage the emotions. After a pause, Joe Buck said, “That is a very impressive young man.” Tim McCarver replied, “He certainly is.”  A few weeks later, Posey was honored with the NL Rookie of the Year Award.

There are only three members of the 2010 champions on the 2018 Giants roster: Posey, Bumgarner, and Pablo Sandoval. The only other player from that team still in the major leagues as of this moment is Romo, now pitching for Tampa Bay.

“Buster Hugs” became a thing right after Tim Lincecum’s first no-hitter in July 2013. A creative and enterprising Cal grad named Jeremy Sasson noticed that the many great moments that had happened for the Giants over the past several years had all had one common element: A Buster Hug “for when you’ve just done something awesome.” He designed a great poster that quickly went viral. Buster was shown the poster on a beat writer’s phone and just smiled.

Don't know where this came from, but it's awesome. #BusterHugs pic.twitter.com/BqplDsC18n

Since the poster was designed in 2013, it’s missing a couple more great Buster Hug moments, namely the 2014 World Series hug(s) for Madison Bumgarner and the 2015 Chris Heston no-hitter. (Lincecum’s second no-hitter in 2014 featured a Hector Hug.) But you get the idea. Tonight’s giveaway is either a Buster Posey or Brian Wilson bobblehead, commemorating the first Buster Hugs in the series. The TV commercial is fantastic.

After last night’s game, Posey’s surgery date was announced. It will be Monday in Vail, Colorado, with two of the best hip surgeons in the country on hand. The recovery timetable is 6-8 months.

Buster updates he will have hip surgery on Monday and his timetable to recover is 6-8 months pic.twitter.com/qJGCPP4TuR

Opening Day 2019 is seven months and one day after Buster’s surgery date. Are there any comments about the Giants waiting so long to schedule his surgery, since they’ve known since at least the All-Star break he’d need it?  Madison, what do you think?

Yeah, couldn’t have said it better myself, Bum.

When a 31-year-old catcher has surgery of this substance, there are always worries that it could be career-ending or at least career-behind-the-plate-ending. We’ll have to see how it goes, but I’m not betting against Buster. His leg and ankle injury in 2011 was devastating, and everyone feared it was career-threatening. But Buster had the best medical advice, the best work ethic, and a strong drive to play again. And all he did in 2012 was win the batting title and the MVP award, catch a perfect game, start the All-Star Game, and lead the Giants to their second title in three years.

You don’t want to win the Comeback Player of the Year Award twice. But it could happen in 2019.

All that said, this development will shape the Giants’ offseason plans. Besides having the best catcher in the game (Posey), the best catching prospect in the game (Joey Bart), an outstanding backup in Nick Hundley, and a former second-round pick in AAA about to make his major league debut (Aramis Garcia)–the Giants will certainly need to sign a veteran catcher in the offseason, even if they do bring Hundley back again. They can’t count on Buster until they can, Bart won’t be ready, and Garcia is not a hyped prospect.

But there will be plenty of time to talk about all that. For now, enjoy your day, Buster. Have fun reliving those 2010 memories with Huff, Burrell, Ross, Torres, Cain, Wilson, Freddy Sanchez, Edgar Renteria, and the others. And then safe travels tomorrow and Godspeed on the surgery Monday. We’ll miss you and we can’t wait until you get back.  Lefty out.