Giants Avoid the Sweep, Drop 6-3 Afternoon Contest Vs. Cincinnatians That Was Oh So Very Winnable 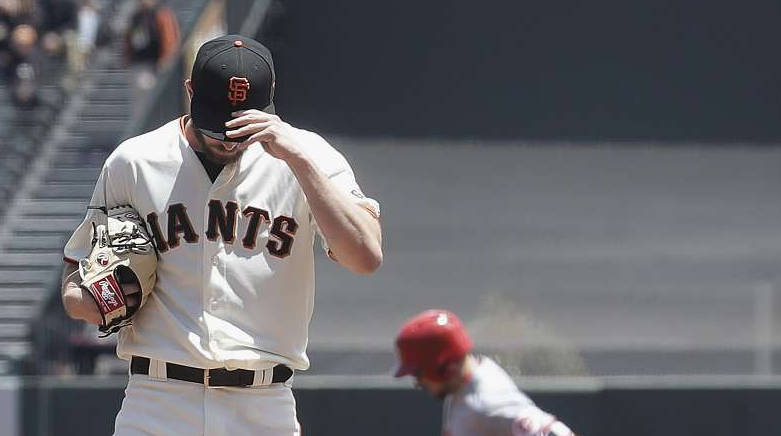 If you really love baseball then watch Kelby Tomlinson’s second inning at bat. He hit a relatively routine line drive to right field that for most mortal men would be a single. It came with a runner on who ended up on third with nobody out. Tomlinson, refusing to be mortal, came dashing with the wings of Achilles out of the batter’s box, had a clear view of the fairly nonchalanceness of Scott Schebler’s approach to the ball and took off for a hustle double. He was easily safe and his aggressiveness, baseball intuition and inspired play were things of beauty. There was hustle, athleticism, determination and good hitting, all in a few seconds. Kelby Tomlinson may be the most underrated Giant on the roster and certainly one of the most fun players to watch in my book. He takes every at bat like he is up in a tie game in the ninth during the seventh game of the World Series.

Despite Tomlinson’s play the Giants could not quite overcome an early 4-0 deficit when Andrew Suarez had a very bad debut to his game. The Giants fought back in the bottom of the first to score two, and should have scored another when Miguel Gomez inexplicably decided not to tag up on a medium deep fly ball to left hit by Gregor Blanco with one out. The throw from Adam Duvall, who earlier in the inning made a spectacular catch to save at least one run, would end up in the backstop. Word on the street is Ron Wotus held him, the rare time he has made a gaffe as third base coach this season.

Brandon Belt hit another homer, his third in three games. Adam Duvall hit his second three run homer in as many games.  Yes, that was a bad trade. Let’s close the book on that one and move on.

Brandon Crawford now has ten hits in his last thirteen at bats after singling in the ninth inning. Wow!

Evan Longoria had three hits. Despite the loss, the Giants took two of three in the series. They face the Rockies for four at Willie Mays Field starting tonight. Jeff Samardzija is pitching.

There was a nice moment with Jon Miller reminiscing about his time with Joe Morgan:

We may have missed a few pitches today making sure we got a pic with our friend Joe Morgan. He’s feeling great and we were thrilled to see him as always. pic.twitter.com/C49IaV1Q0m