9-5: Another Day at the Office for Brandon Belt 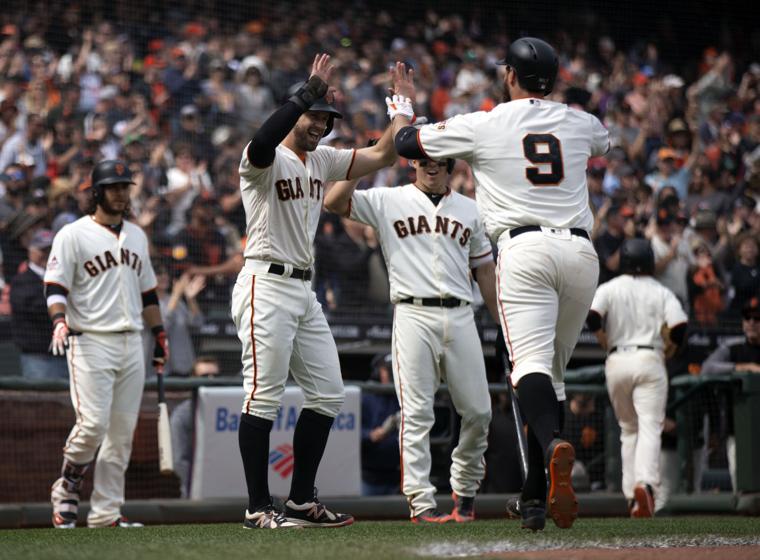 What made Brandon Belt’s three-run seventh inning blast especially poignant was how the big first baseman altered his approach in a critical juncture of the game. The Giants and Sam Dyson had just coughed up the lead in the top of the seventh after rallying dramatically in the bottom of the sixth to tie the game. When the Giants needed a shutdown inning to take control of the game they did not get it.

Up comes Belt with two on and one out. His usual approach to an at-bat is patience, patience, patience, to work the count in his favor and make the pitcher labor. In this case he was “laying in the weeds” as Duane Kuiper says, sitting fastball in on the first pitch of the at-bat. He got it. He hammered it.

The ball was pulverized at 108 MPH into the right field bleaches over the brick monster. A homer by Nick Hundley immediately following BB9’s blast and the victory party was on giving the Giants a 9-5 win a day after they defeated the Rockies 9-4 to salvage the four game series against an NL West nemesis as they moved to only 2 games behind the reeling Diamondbacks.

BB9 now leads the Giants in average (.313), homers (11) and RBIs (29). He is on pace to hit about 38 dingers and may reach the 40 mark this season, making him the first Giant since Barry Bonds in 2002 to reach that milestone. Right now BB9 may even be in the running for NL MVP. It’s early I know but it’s fun to speculate. Keep it going Belt!

This was a crucial win for the Giants for a few reasons. First, it game them a 4-3 homestand. Second, it brought them back to .500, and third, it gives them momentum, along with their win on Saturday, as they depart for a huge eight game road trip to Houston, Chicago and Denver.

This was a big play in the game:

With Bumgarner, and possibly Cueto waiting in the wings to bring in reinforcements to the pitching staff, the Giants may have a very formidable offensive machine that could cause damage in the suddenly wide open NL West.

There are many suppositions and criticism about Bruce Bochy’s use of 13 pitchers on the 25 man roster and the excess of outfielders who appear to be on the cusp of Major League serviceability (Gorkys, Blanco and Ajax) as Austin Slater, Mac and Steven Duggar languish in AAA Sacramento (OK Mac is working on his rehab assignment but you get the picture)). There will be interesting decisions to make when Alen Hanson returns and when Bumgarner rides his horse back into the rotation. Right now I cannot quibble with the skipper’s use of an 8-man relief corps when the Giants starters are barely able to get past the fifth inning. The move has helped keep many games close and provided excellent depth to the latter half of relief help.