All Hail Gorkys and the Brandons! 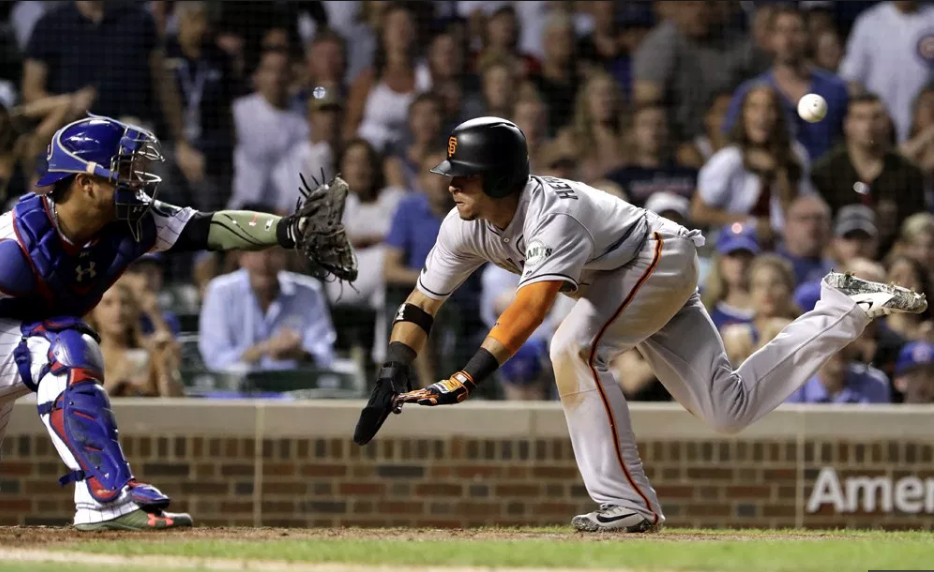 The Giants beat prevailed over the Cubs 5-4 for only their second win in their last thirteen at Wrigley Field!

The Giants defeated the Cubs at Wrigley for the first time since the 1977 season in a thrilling ballgame last night that was broadcast on National TV, presumably west of the Mississippi since the East Coasters got to see the Mike Trout Show.

Brandon Crawford hit an opposite field two-run homer in the basket to tie the game at 2. Gorkys Hernandez continued his hot hitting with three more knocks to raise his batting average to a slick .311. He is now approaching 2010 Andres Torres territory, perhaps due in no small part to Bruce Bochy’s vote of confidence that publicly proclaimed Gorkys to be the everyday center fielder. It may also have something to do with the Gorkys whisperer, Matthew, as well!

Brandon Crawford made another spectacular platy at short in the fourth and went 2 for 3 to raise his batting average to .446 (37 for 83) in the month of May. I smell a player of the month award on the horizon. After a slow start to the season, Mr. Crawford is now one of the Giants top run-producers, just behind the other Brandon: Mr. Belt, who drove in two clutch runs last night.

Chris Stratton earned the win despite a bit of a rocky start but he was able to limit damage in the first when the Cubs had a bases loaded nobody out, this is going to be another embarrassing Giants loss situation. He escaped allowing only one run, on a walk, after Jose Quintana, the Cubs pitcher, inexplicably swung at the first pitch and hit a hard smash to Sir Kelby Tomlinson who began a 5-6-3 double play to keep the Giants in the game and frustrate the hometown Chicagoans.

I have thoroughly enjoyed reading some of the TWG comments about Mr. Hernandez:

“It’s a Gorkys world, we just live in it”

“I’ve never seen Gorkys and God in the same room together, just sayin…”

“Who knew we’d all jump on the Gorkys bandwagon?”

This was a gratifying win and Gorkys Hernandez is en fuego. His play the entire road trip and even before has been inspired. He has as many homers (5) as Cutch and Posey combined (Sad!).

He is getting on base and he is hitting against top shelf starting and relief pitching. I was one of the Gorkys doubters on record and I am thrilled for him and happy to have been mistaken. It appears Gorkys has been receiving the pleasurable vibes sent his way by his guru here at TWG!

MadBum had himself a rehab game in Sacramento. He is ready baby! Watch out National League!

Attention Bobby Evans and Bruce Bochy: Madison Bumgarner just struck out eight of 12 hitters in his first rehab game and feels ready to pitch in the bigs. My story. #SFGiants https://t.co/CGSfZ8hwHt

Joe Panik is also on the verge of returning, perhaps as early as next week.

Alen Hanson will play in a rehab game in a couple days and may be back in a week as well.

Things are looking up!