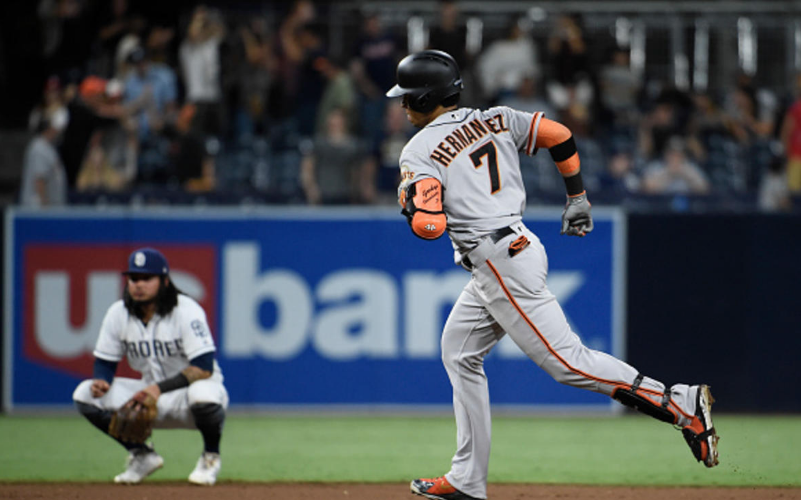 The San Francisco Giants defeated the San Diego Padres 5-3 in 12 innings behind a home run by Gorkys Hernandez and stellar relief work by the Giants bullpen. The pen, despite Mark Melancon coughing up the lead, allowed only one run in seven innings of work.

Derek Holland pitched his usual stout five innings allowing only 2 runs and generally pitching efficiently. He has been a find.

The Giants had a 3-0 lead early in the game thanks to a ball that was sent into another dimension down the left field line by Chase d’Arnaud for a three-run blast in the top of the second inning. The home run had Padres fans running for their lives in the second deck of the Western Metal Supply building. That ball was hit so hard that the ricochets alone were dangerous. Fortunately no casualties were reported. The Giants second baseman turned on a slider on the inside corner in a virtuoso piece of hitting. For a hitter to hit that ball so hard, so far and to keep it fair is some seriously good artistry.

That was Chase d’Arnaud’s third dinger in 35 at-bats since being called up. The often over-looked utility player seems to have genuine, grade A, All-American thunder in his wood.

The Giants would get the first two batters on in the top of the fourth in what looked like an opportune time to put the game away. The Padres pitcher, Eric Lauer, was on the ropes, having thrown more than forty pitches in the first two innings. Unfortunately, the next three batters went down quietly. The threat was over and the opportunity was lost. This got me thinking: The Giants are a team with an offensive philosophy suited for big boppers: keep the line moving, wait for the big hit or home run. The problem with this philosophy is that it is ill-suited for their personnel. A change in organization hitting theory is in order. The Giants are simply too passive on the bases. They do not run enough. They do not send runners. They do not know how to move runners over with their outs and they seem to have a terrible predisposition agains bunting and playing small ball in general in a classic case of denial. This, Giants fans, is a small ball team, whether we like it or not.

I am of the theory that you have to manage according to your strengths and you cannot ask your players to be what they are not. If the Giants want to win as constructed they will have to change the way the approach their mindset on the bases and at the plate to suit their much-improved team speed. This bunch is never going to rival Bonds and Kent or Mitchell and Clark if you get my drift.

The Legend of Gorkys Hernandez

Take another look at @GorkysHernandez

This brings me to one of the great bright spots, if not the brightest spot of the 2018 season: Sir Gorkys Hernandez, the recently forgotten man in the Giants new youth push in the outfield. His LONG home run into left field put the Giants up in the 12th inning and sent the many Giants fans at Willie Mays Field South home happy. The homer atoned for an error earlier in the game.

Gorkys has been nothing short of fantastic this season with his play in center and his new-found power. That drive was his 13th long ball, putting him one behind BB9 for the team lead. Put that in your pipe and smoke it! Wow! Just wow!

Gorkys has made a believer and a fan out of me!

It seems the TWG crew is getting attention on Twitter. First Peter Johnson and now our very own Dr. Lefty with her back and forth with Mr. Schulman: