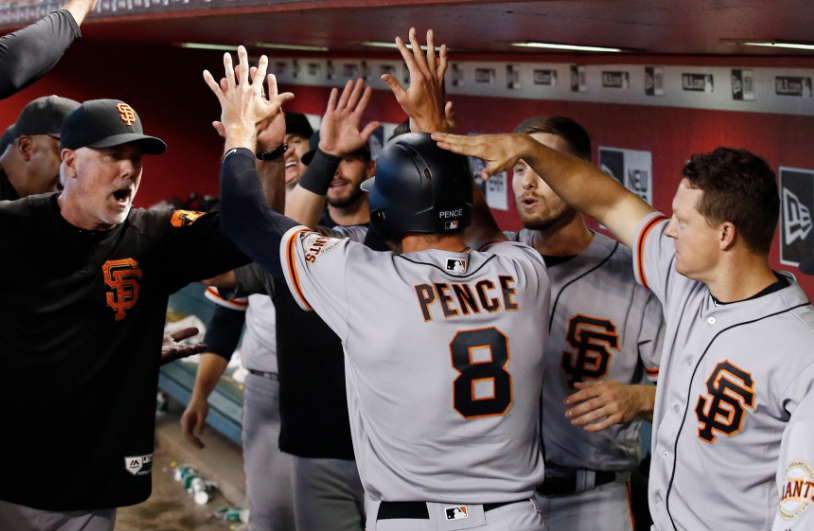 This was a dangerous series. The Giants had just lost a heartbreaker at home to the Rockies after leading in the ninth inning and there were worries among Giants Nation that the carryover from that game might be a bad way to start a road trip against the division leading Diamondbacks. The Giants entered the series 5.5 games back. If the DBacks had swept our boys then our season may very well have been over. Instead, the hometown heroes swept Arizona, a result nobody, I mean nobody saw coming.

“They kicked our butts. They came in here and beat us, straight up.”

The Giants out-scored the Phoenix Snakes 18-7 and outplayed them in every way: at the plate, on the bases, in the field and on the mound. In yesterday’s war of attrition, Derek Holland lasted only 3 2/3 innings but he was able to keep the Giants in the lead and minimize damage. Corey Gearrin (remember him?) deserves a game ball for getting one out in a bases loaded, two-out situation with Arizona threatening to take the lead in the bottom of the fourth.

What most impressed me with this game was how the Giants kept hitting, kept driving in runs, and kept the aggressive approach at the plate. The add-on runs were much needed with Arizona refusing to lie down and roll over like good, defeated serpents. Hunter Pence had a big 2-run pinch hit double and there were many other heroes at the plate. BB9 and Joey Baseball each had two knocks and two RBIs. Nick Hundley, the world’s greatest backup catcher, had three more hits.

The Giants had to use seven pitchers in a game that lasted four hours and nine innings and had 29 total hits. Mark Melancon had a nervy ninth and had to give way to Will “Fresh Prince” Smith who calmly struck out Jake Lamb who represented the tying run, to end the game.

With the win the Giants are 45-40, the first time they are five games over .500 this season, and 2.5 games behind the DBacks for first place. They are also tied with the Dodgers.

This was a sensational series for the Giants and easily their greatest three-game set on the road this year so far. This conquest in the desert is something to remember and cherish, especially because Madison Bumgarner did not pitch.

For me, the most interesting development in the series was the starting pitching. In particular, the two starts by Andrew Suarez and Dereck Rodriguez, who calmly squashed a hot-hitting arch-rival in enemy territory that also happens to be one of the highest run-scoring parks in the League. If D-Rod and Suarez continue to pitch well it raises interesting possibilities for the Giants in terms of trades. Suddenly our pitching rotation does not appear to be a weak point. Suddenly a certain pitcher who is due back soon who is overpaid, and has underperformed for his contract, may be expendable in a trade… It’s just a theory…