Ghastly Defensive Play, Another Poor Start and Hiccups in the Tenth Doom Giants Vs Rockies 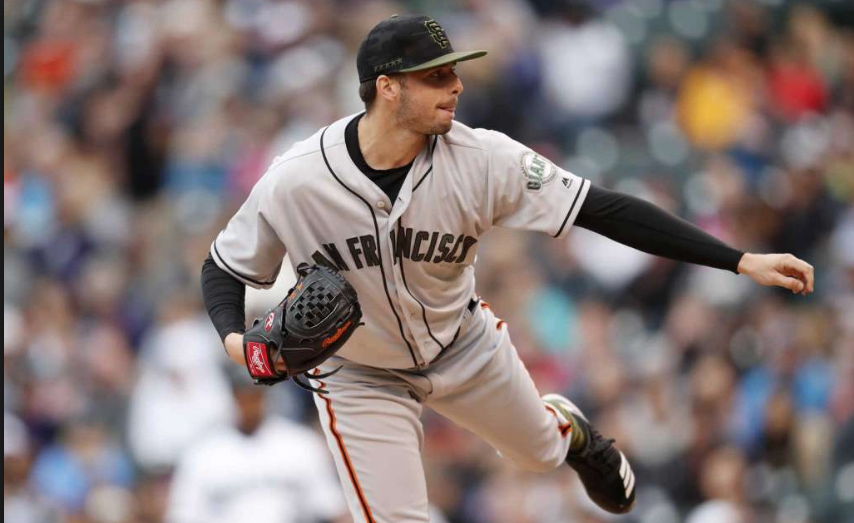 The Giants kicked and threw the ball around last night. They dropped it too and generally played horrific defense. Errors by Longoria, Kelby and Posey, along with non-call miscues by BCraw on a tag play all made for a bad night of glovework for the San Franciscans and helped to contribute to a tenth inning walk-off loss to the Rockies in Denver. Those three errors led to one unearned run, the difference in the game.

Andrew Suarez immediately coughed up a 2-0 lead in the bottom of the first surrendering a three-run bomb to Trevor Storey.

Giants pitchers have now given up 46 runs in their last 54 first innings!

The Giants would fight back and play hard nonetheless. Gorkys continued his hot hitting with a dinger and another hit, scoring two runs and walking. He is one of the best players on the team all of a sudden and good for him! He has become a folk hero in blog circles and deserves all the love and the starting center field spot.

Then there was Strickland, with his hiccups in the bottom of the tenth, surrendering the walk off hit to Chris Iannetta, a ball hit up the middle that had a mind of its own after Andrew McCutchen made a valiant effort to grab a sinking liner that put runners on first and third with one out.

The Giants are now 1-5 on this road trip. Yes, they’re starting pitching is simply terrible. Yes, they have injuries. Unfortunately, the team is simply not playing well and you cannot blame it all on injuries. Evan Longoria has simply been mostly awful at third base this year (despite his two doubles and three runs batted in last night).

Jeff Samardzija has failed to provide any stability to the starting rotation with the absence of Bum and Cueto.

The Giants are at the bottom of the National League in pretty much all fielding metrics.

I expect better and so do you.

When the Giants do hit a bit, the bullpen cannot do its job, as was the case last night.

I could say a lot more about the game but why bother?

I watched every pitch of this game and I see a Giants team that has enough talent to make the postseason when healthy. But, as they are currently constructed, they appear to miss Joe Panik, Bumgarner and Cueto too much to be competitive. Thankfully they are still in the running for the division at four games back. Don’t look now but the Dodgers are hot and gaining on the Giants. They have gained six games on the Giants in the last 11.

To me, the most depressing thing about this current Giants team is the performance of the starting staff. Suarez and Blach, in particular, do not appear ready to be Major League starting pitchers and that hurts when you consider the time, effort and draft stock the Giants have invested in them. Tyler Beede’s earlier work was not impressive either and he is not tearing it up in Sacramento. Chris Stratton has been wildly inconsistent. The Giants suddenly can no longer develop starting pitchers and this is a major issue, perhaps the most pressing concern for the future.

Congratulations to the Warriors on a thrilling game 7 win to reach the NBA Finals for the fourth straight year. I generally am not a basketball fan but I watched a bit of the game, during Giants inning breaks, and it was fascinating. The game played out like a Shakesepearean drama with the Golden Staters turning into heroes at the right time. The Rockets were mortals playing the Gods of Basketball in the third quarter. It was epic.

Those pseudo passive-aggressive green camouflage uniforms Major League Baseball produces for the Memorial Day weekend are not only a fashion travesty they are an affront to the history of the game and to viewers as well. They are a disgrace to many who prefer not to remember our fallen heroes through the lens of military fashion statements. How about we think of another way to visually commemorate those who made the ultimate sacrifice? In Canada and the UK people celebrate World War I veterans by wearing red poppies on lapels and blouses. Perhaps Major League Baseball could stop with the desperate, lame and ghastly attempt to cash in on holidays with new gear to sell and could instead create special commemorative patches with the visual grace and dignity befitting of the occasion?

I need to write a letter to Manfred.

Correction: In an earlier version of this post I stated that I banned someone named “22sSweetSwing”. My admin team banned this person in error. My apologies. The ban was lifted. We confused you with another user. Please contact me directly if you have trouble posting. We apologize for any inconvenience.