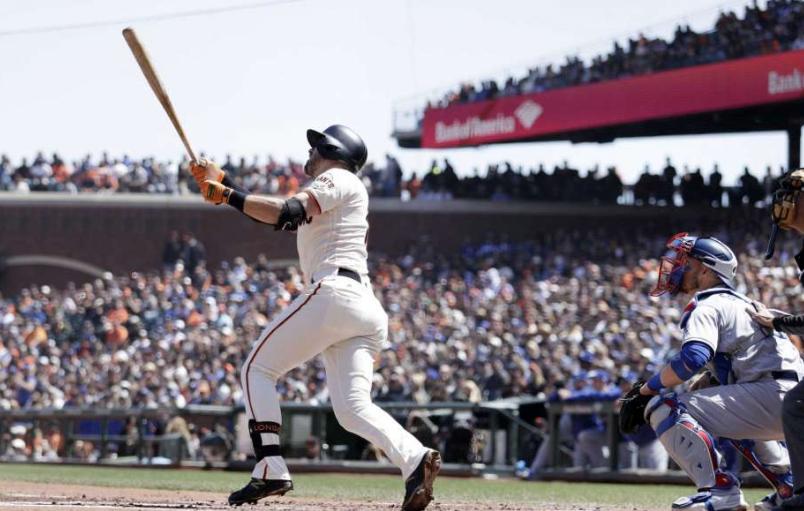 This is what Giants winning baseball looks like: A big hit, strong starting pitching, good defense and a shutdown bullpen. Ty Blach pitched six strong innings allowing only one run. Evan Longoria, a pitch after missing a double by an inch, hit a towering three-run homer with two outs in the first inning. That’s money folks. Evan Longoria is playing like an MVP. So is Brandon Belt. Right now both players have to be considered among the best in the National League.

This was a glorious day at the park. The sun was shining. The sell-out crowd was enthusiastic, and the Dodgers were vulnerable after a tough win by the Giants last night. It was time to get over the hump by reaching .500 and gaining a little momentum. This is the third straight series win for the Giants (Angels, Nationals). All three have come against very good teams. All have come without MadBum.

Joe Panik is out for eight weeks but I don’t get the sense of doom and gloom this year. I think this team has some special fight and more talent on it than last season. The addition of Longoria was no small thing for the Giants. I have watched him play for ten years while with the Rays. I get their games on my cable package and one of my nighttime rituals at dinner is watching the Rays until the Giants come on. I used to daydream about having Evan Longoria on my team. Bobby Evans made that true with one of the most lopsided trades of the offseason. Longoria is a gamer, a top flight third baseman and the type of hitter who produces runs and can carry a team.

Ty Blach continues to be Dodger Kryptonite. That he should pitch in every series against the Dodgers goes without saying. He is our Clayton Kershaw (vs. LA).

Tonight the Giants begin a three game series against San Diego. It’s time to end the run of futility against the Padres that started with the Balk Off. I’m with Lefty. The curse of the Balk Off is over so tonight is a new game. The Giants need to win two of three to keep that momentum. A sweep would erase the resentment of the spanking the Padres gave the Giants in the previous series in San Diego and make a statement. I prefer the latter.

I will be in Pittsburgh for all three games. I will also be in Philly for the three games there. Many of you have said you will join me, including Surf Maui, confirmed, The Sincere, EFrain, Rob Deer and others. I am not sure how to handle ticket purchases. I guess we can meet up for dinner beforehand somewhere and then get tickets before one game together. Let me know what you all think. My email is gmagaliosatgmaildotcom.