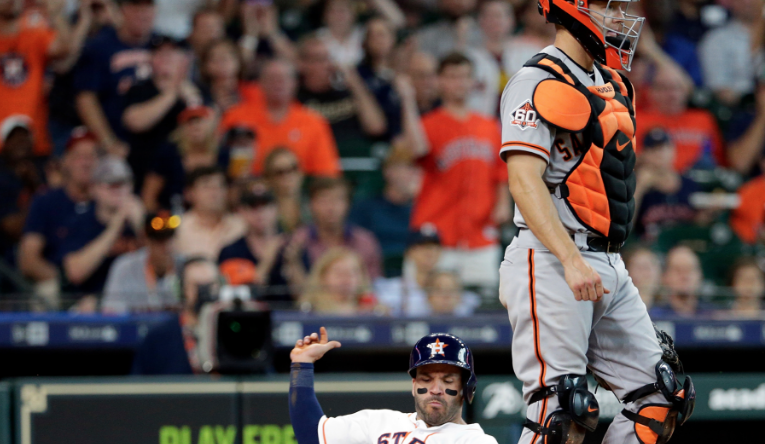 The Giants had a 1-0 lead in the bottom of the fourth with two outs and the catch of a pop-up a way from going into the dugout in the top of the fifth with the confidence of a shutdown inning and the lead. Instead, after failing to get a good read on the ball Andrew McCutchen had to go full speed to catch it and ended up dropping it as it was about to land in his glove. It was a devastating error that allowed a run to score to tie the game and give the Astros new momentum.

Up until that point Jeff Samardzija had been pitching well though not exactly cruising. His fastball was hitting 95 MPH and with Gorkys Hernandez scoring on Buster Posey’s sacrifice fly after a lead-off triple, the Giants had their first lead of the series.

Things were looking up, until the fourth.

In the bottom of the fifth the wheels came off of the Giants locomotive to a series split. Smarge gave up a leadoff walk that leader scored on a George Springer home run that threatened to put those sitting in the left field bleachers in the hospital. It was hit that hard. By the time Dave Fleming was uttering “That ball is hit ha..” Springer’s drive was out of the park.

The Giants could do no further damage against Justin “Mr. Universe” Verlander or the Astros Bullpen.

The Giants made a second error on a routine play when BCraw threw away a grounder in the 8th. The San Francisco defensive play has been excruciatingly tortured in the past month. With the lack of reliable starting pitching, the Giants are going to have make every makeable play and a few un-makeable ones if they want to have a chance at winning close games like these.

The DBacks lost their 13th in 14 games. The division is up for grabs, an incredible development when only a month ago Arizona was playing .700 baseball and the Giants appeared stuck swimming upstream with one armed tied behind their Madison Bumgarners.