Giants Salvage 4-6 Road Trip With a Win Against Dodgers Behind Chris Stratton, 4-1 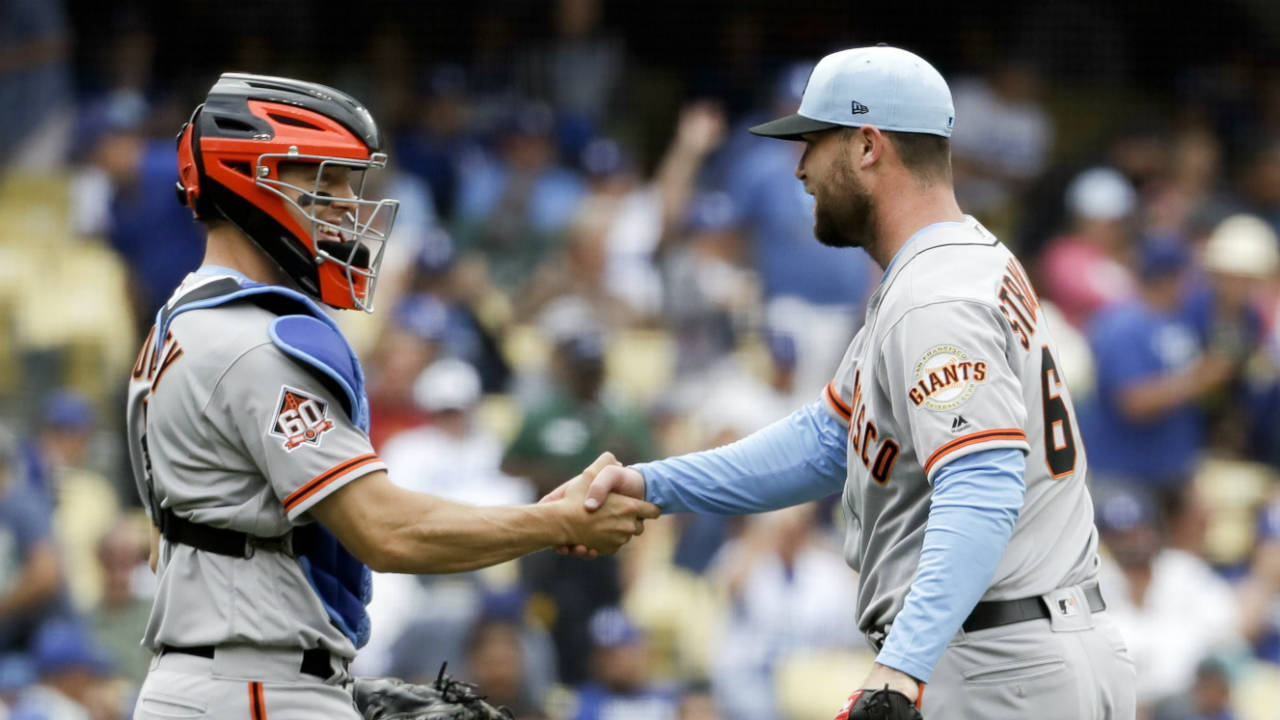 It’s a very interesting experience playing great music while watching the Giants play baseball. The last two games I played a variety of records, from Daughter and Cocteau Twins to Mazzy Star and Joy Division bootlegs instead of listening to the commentary. I enjoyed it thoroughly. I can catch analysis and opinions on our blog (they are more accurate and truer than color commentary anyway). Watching the Giants beat the Dodgers yesterday behind Chris Stratton felt very much Sonambulisticallll…It was as if both teams were starring in a Terrence Malick movie and the entire nine innings were a reverie sequence…..

Baseball is a beautiful game at any time. When it is accompanied by beautiful music the experience can be down right hallucinogenic and mind-expanding, especially when served with a good cocktail…

The Giants had three hits in the game and basically sleepwalked through the entire series. Each team scored a total of 7 runs in the three game set. Yesterday was the first time in thirteen games at Dodger Stadium the Giants scored more than two runs. That’s downright pathetic. Either the pitching was fantastic, the hitting was weak or neither team is very good. It seems the Dodgers and Giants often cancel each other out in interesting ways. This often happens in rivalry games and in any sport, as if the rivalry overtakes the talent and becomes a thing in itself…

Fortunately, BB9 and Nick Hundley went yard for the Giants yesterday and our boys from San Francisco were able to avert a disastrous sweep and road trip, to finish 4-6 in the ten day journey rather than 3-7. It seems the Giants are pretty good at avoiding disaster and clinging to mediocrity. It just may be that this team is not very good at winning games on a regular basis and they are what their record is, not what we hope them to be (Madbum return, Cueto return, Smarge return, etc…..). Here is a thought to keep you up at night: What if Bumgarner, Cueto, and Smarge are all just mediocre, way past their “best by” dates and simply not good enough to get the Giants to the promised land? What if the core veterans of the Giants (Posey, BCraw, Panik, BB9) are all too complacent and not talented enough to give the team the urgency, drive and fire needed to win another World Series? What if the addition of 30-something and past-their-prime former stars like Austin Jackson, Evan Longoria, and Andrew McCutchen is simply too little, too expensive and too late for another title push?

Quite frankly, I have seen nothing encouraging in Bumgarner’s last three starts back from the disabled list. His fastball is subpar. His command is gone and his competitiveness is evolving into frustration and whininess…

While the Giants hitting has been a bit better than last year, it is not Yankee-esque, meaning, not good enough to compensate for mediocre to poor starting pitching. Ironically, each of the three starts in the Dodger series was good enough to keep the Giants in the games. The problem was the Dodger starting staff was better on Friday and Saturday. If this Dodger team, without Kershaw, is good enough to take two of three from the Giants when the Giants ace pitches in a series then things don’t bode well.

Much was made about the Giants team batting average but they are 9th in runs scored in the National League and 11th in team ERA. Those stats are not even good enough to be considered mediocre in my book. With Arizona playing much better and the Dodgers seemingly able to produce pitching in a factory processing plant, the Giants have a long road ahead to get to the postseason this year.

Sorry to be a downer but Monday mornings are a great time for a reality check.

Tonight the Marlins come to town as the Giants return home. The game is at 7:15 Willie Mays Field time.

Speaking of time, it’s time for some payback.