Giants Strike Out 17 Times in 4-2 Loss to Philadelphia 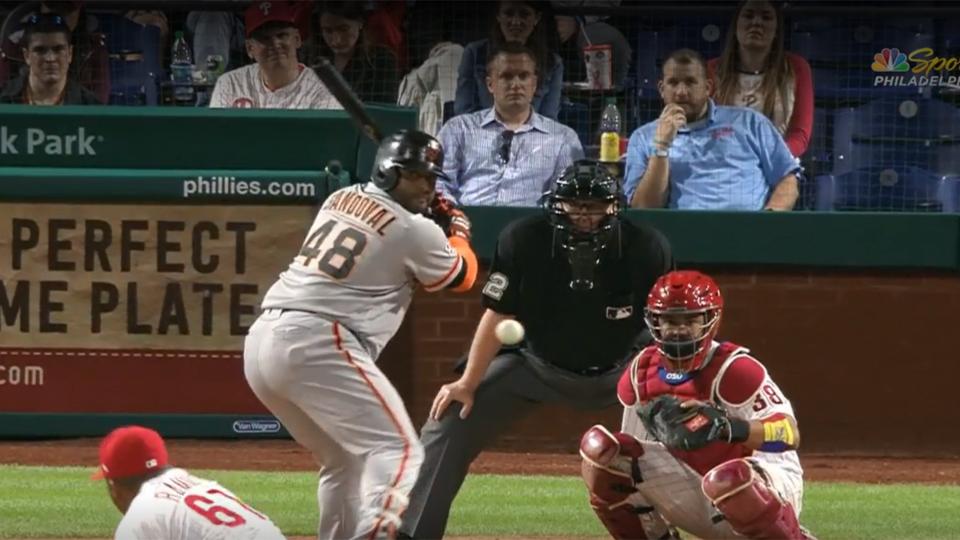 That was a memorable game, for mostly bad reasons. On a beautiful Spring night in the city of brotherly love, the Phillies pitchers man-handled the Giants hitters, striking them out a ridiculous 17 times, with 12 of those coming by Phillies starter and ace Aaron Nola. I would not have figured the veteran hitters like the Giants would be so susceptible to the K, particularly since up to last night’s game, the hitting attack was scoring runs and raking.

Brandon Crawford and Alen Hanson made a spectacular double play to save a run and keep the Giants in the game on a chopper hit by Phillies pitcher Aaron Nola in the bottom of 5th.

Austin Jackson now has 35 strikeouts in 85 at-bats. Grego Blanco got picked off in a two-run game with two outs and Andre McCutchen hitting, immediately after a review of an earlier pick off attempt nearly had him getting rung up!

Derek Holland kept the Giants in the game, despite surrendering two long solo home runs. He pitched five innings averting total disaster, Corey Gearrin gave up on add-on dinger in the bandbox of a baseball field affectionately called “The Bank” by locals. It is a lovely park, with excellent site lines everywhere and a very friendly staff. The Phillies pay homage to their past throughout the park with statues, posters and various graphics. Their fans are proud and yet resigned to a rebuild. Their young bashers can play. Between guys like Kingery, Hoskins, Herrera and Alfaro I see now why their front office went out on two limbs to sign Carlos Santana and Jake Arietta.

Sometimes baseball happens and the opposing pitcher is just too good. That’s how I choose to look at this game. The Giants had no answer for Nola’s change-up. up. I have never seen Buster Posey look so out of sorts on so many at-bats.

The Bank plays very small. Routine fly balls carry to the wall and beyond. Anything hit in the air in the outfield is trouble. This is not a park built for fly ball pitchers like Holland and Samardzija.

I think the Phillies are still mad about 2010.

If you have never been to Philadelphia for a ballgame you could do a lot worse. It’s a pretty park close to downtown and there is plenty to do in the city before and after games. The Philadelphia Museum of Art is a gorgeous building with a ridiculously brilliant collection of art from the entire world spanning from almost prehistory to the current day. The Barnes Foundation is phenomenal with an especially interesting history and new building. There is Independence Hall, an national historic park; a variety of jazz clubs and of course the non-stop history show of the founding of the nation with many buildings in Old Town dating back to the 18th century.

What I like most about Philadelphia is how proud the locals are of their city and its history.

Congratulations to my compatriot James Paxton who pitched a no-hitter last night for the Blue Jays against the Mariners. Paxton is the first Canadian pitcher to throw a no-hitter in his native land.