Giants Win One in Pennsylvania, Avoid Sweep and Winless Keystone State Trip With 5-0 Victory Over Pirates 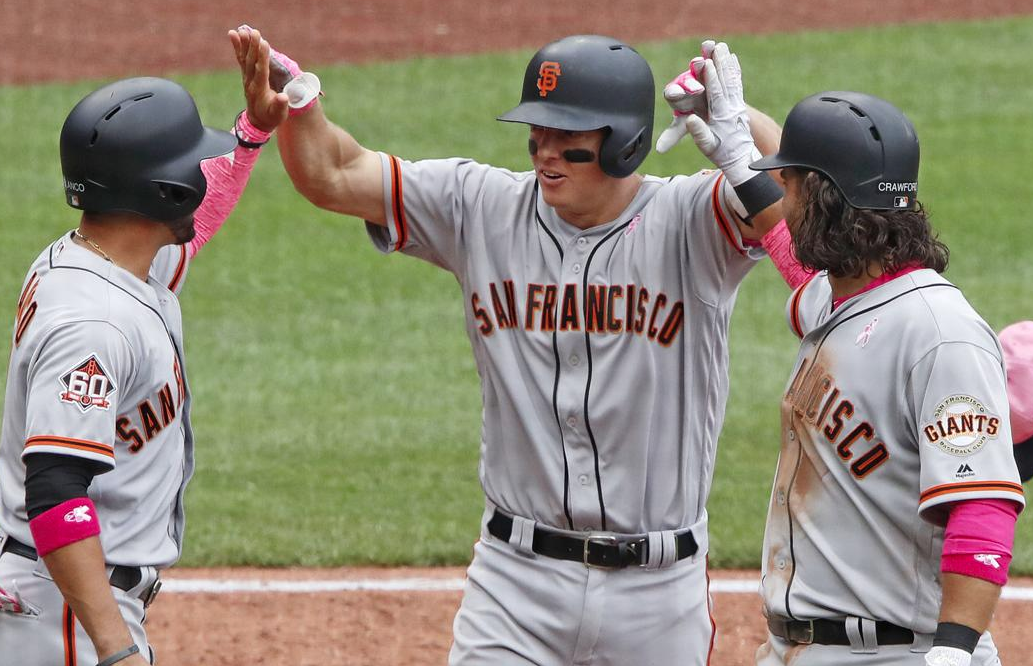 It would have been very sad to travel thousands of miles to see the Giants go 0 for Pennsylvania. After their impressive sweep of the Braves the Giants were not even competitive in most of their six game losing streak. Saturday night’s 6-5 defeat via a hit batsman was a heartbreaker after a 1.5 hours rain delay.

Yesterday, the Giants rested Buster Posey, played Belt in left and Sandoval at first base. I was not very confident going to the game. Suf Maui and I were having an interesting conversation about what losing does to a team’s mindset. I said a professional has to fight that self-defeating mentality. As I fan I was not confident. Thankfully the team was ready to play well and they did.

Derek Holland started and pitched 6 1/3 innings of shutout baseball getting two key double plays and avoiding trouble. His performance was by far the best of his starts as a Giant.

The game was scoreless through five as the Giants mashed the ball all over the park, only to find Pirate outfielders played perfectly for deep blasts and live drives by the likes of Gorkys Hernandez, Brandon Belt and Nick Hundley. The Giants luck would turn finally in the top of the sixth when Nick Hundley hit a three-run home run down the left field line after Brandon Crawford hit a two-out hustle RBI double (his third hit of the game) and Gorkys Hernandez led off the inning with a solo blast to left.

The bullpen took care of business the rest of the way with Strick getting the save in the ninth. The Giants, after a six-game losing streak now find themselves only 4.5 games behind the Diamondbacks for first place in the NL West. The division had a rough week and the Dodgers continue to nosedive.

The Pittsburgh Posse (Surf Maui, Sincere, Rob Deer, and Greek Giant) met for drinks and dinner before Friday and Saturday’s games. It was great to meet the real people behind the handles and all the posts. Rob Deer is even more humorous and witty in person. The Sincere is even cooler and more amiable in the flesh. The gang also got to meet two of my longtime artist friends who do not follow baseball, Bill and Ian. We all went out after Friday night’s game to experience the remarkable renaissance of fun bars and restaurants of Lawrenceville, my former neighborhood.

During Friday night’s game the Pirate fans, a crowd of around 38,000, gave Cutch a phenomenal standing ovation that lasted over a minute in the top of the first. Francisco Cervelli stood out in front of home plate to let the beloved former Pirate tip his hat to all and feel the loving vibe. It was an amazing experence and helped reduce the pain of an 11-2 blowout. Even the Pirates clapped. Everywhere I went in Pittsburgh this past weekend, wearing my Giants gear, I was asked about McCutchen: “How’s he doing?”, “Does San Francisco love him like we do?” Cutch is revered as one of their own among Pittsburghers. One Pirate fan was telling me the story: he married a local girl, had a baby and still lives in the city of three rivers.

With every at-bat in the series and every jog out into right field he received an ovation. I have never seen anything like it.

The Pirate fans were all to a person remarkably welcoming and interested in our fandom and how far we traveled for the games. They all would wish us a good stay in Pittsburgh and safe return home. I would say Pittsburgh may be the kindest and friendliest city in the nation.

PNC Park is a delight. The ritual of hanging out downtown before games and crossing the Roberto Clemente bridge to go to the Park is wonderful. Only Willie Mays Field beats the PNC Park experience of the eight Major League parks I have seen in person.

Tonight the Giants face the Reds in San Francisco. Chris Stratton is seeking to create a winning streak. The Reds come to town for three with the Rockies arriving for a four game set afterwards.