Hundley to Padres: Take Your Athleticism and Shove It Up Your Advanced Metrics! 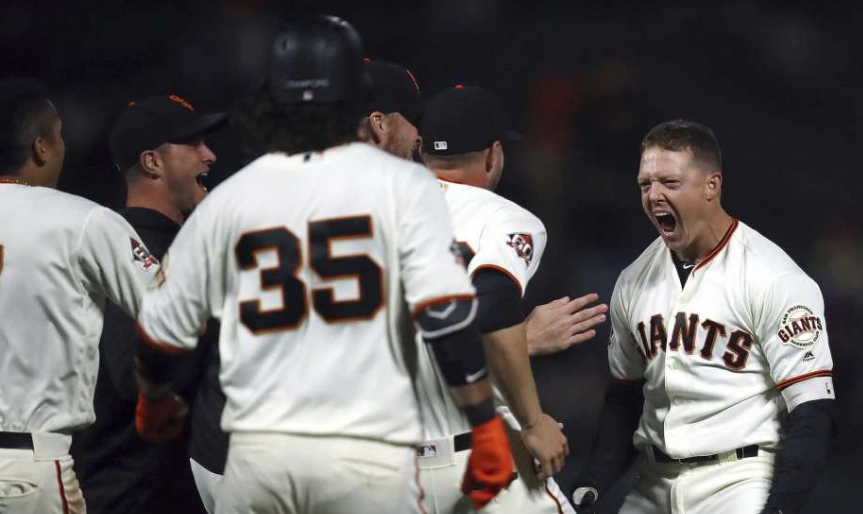 Baseball is a funny game.

When last night’s ballgame was unraveling for the Giants in the sixth as the Padres took the lead I shut my lights, went to bed, and muttered to myself: “The Giants will find a way to come back.” I just had a feeling.

The Giants were up 3-0 in the first. Then they were down 5-3 with two outs in the bottom of the ninth before an incredible rally that included long and impressive at-bats by both Brandon Belt and Buster Posey that resulted in walks, a bloop single by Evan Longoria, and a clutch line drive by Hundley that won the game. Brand Hand was gassed thanks to having pitched in the 8th inning and thanks to the long at-bats by Belt and Posey.

Evidently Bruce Bochy was out of pitchers and claimed to ready to insert BB9 to pitch the tenth.

The Giants are now 12-3 when they score first in a game and 3-11 when their opponent scores first. That’s a very interesting stat folks.

The Giants have 3 walk-off wins this year, the most in baseball.

This team has character, fight and magic to it!

One thing I noticed about last night’s line up: With Cutch, Ajax, Tomlinson, Gorkys, and Hanson, the Giants had plus plus speed at five of the eight starting positions. That speed proved huge in the first inning when Jackson made a remarkable play to keep Eric Hosmer’s bullet from getting by him and holding the Padre first baseman to a single instead of a triple or worse. That play ended up preventing at least one run when Smarge struggled with his controlled and had runners on first and third with one out, before escaping with no damage.

In the bottom of the first Gorkys scored from first base after singling, on Cutch’s triple. Speed made that run.

It appears that the Giants are faster and deeper in their bench than in many recent years.

The Padres have a world of athleticism and baseball talent in their young roster. They have some scary good players like Margot, Cordero, and Galvis. As I watched them come from behind last night I realized why the Giants have such a tough time against them. They, the Padres that is, are not a good match up for the Giants, who are generally older, slower and unable to silence those young Padre bats. These two teams represent polar opposites in philosophy with the Padres being the young, talented, powerful and athletic squad of potentially great players and the Giants relying on veterans, baseball skills and experience at the expense of youth and athleticism at times.

You can take your athleticism and shove it up your advanced metrics!

It’s interesting to see how the Giants continue to win despite being shorthanded. The team has that certain something leads to victories and it appears to be legit after one month of play. The Giants are now in second place, 5.5 games behind the Dbacks, who beat the Dodgers last night.