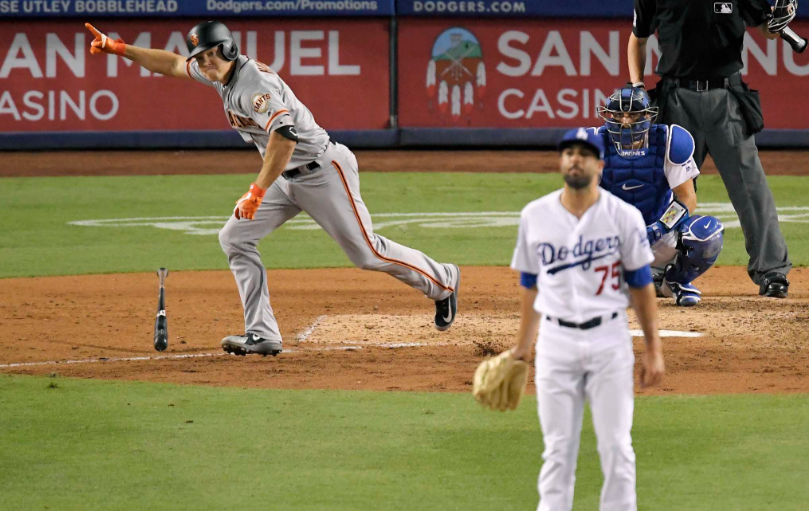 That was epic! In a classic game to remembered for the ages that will go down in Giants-Dodgers lore. Nick Hundley hit a two-out bases loaded two-run single in the bottom of the ninth to bring home the tying and winning runs after the Giants were completely man-handled by Clayton Kershaw for eight innings. After his starter threw 110 pitches, Dave Roberts decided to bring in left-handed reliever Scott Alexander. Scott Alexander, the closer du jour for the Dodgers, gave up as many hits in two-thirds of an inning in last night’s game as Kershaw did in the first eight innings. Last night’s game was the fourth game in a row the Dodgers lost, three of which came  after they were leading in the 8th inning. The Bums are without Kenley Jansen and in disarray.

Gorkys Hernandez singled in an insurance run and the Giants added another on an error by Max Muncie. It was a magical ninth inning. The Dodger fans were truly stunned. The look on Scott Alexander’s face in the dugout once he was pulled was one of shell-shocked delirium. The choice of bringing in another left-hander as a reliever for Kershaw while the Giants right-handed lineup was already in play seemed a bit curious. Bruce Bochy out-managed Dave Roberts again.

Make no mistake, this was a playoff game for the Giants.

Earlier in the game Brandon Crawford had a terrible collision with Gorkys Hernandez with his head hitting the left fielder’s leg. Craw would leave the game and undergo a concussion protocol. The word coming out of the Giants offices is that our all-world shortstop is feeling better. I am saying my prayers for his health and well-being first, then for his return to the lineup second.

Lost in the dramaturgy was Madison Bumgarner’s very good start, a line of six innings, two runs (one on an unlucky bloop double by Kershaw), seven hits and two walks. MadBum had four strikeouts and hit 92 MPH a few times on the radar gun. His stuff seemed much crisper and his ability to induce weak contact was a key part to his success. The Giants pitchers did not get the Dodgers to give up a 1-2-3 inning all night so there was traffic on the bases for both Bumgarner and Will Smith, who earned the save. Bumgarner could have pitched the seventh and one question I would have liked to ask our skipper is why, in the past two starts, has he limited Bum’s pitch count? Is he being cautious? Is there an issue with Bumgarner’s nasal mucous count? The fans want to know.

One important note: Hunter Pence pinch hit with two outs in the eighth inning when Kershaw was at 100 pitches. A quick out and Kershaw probably bounces back for the ninth inning. Instead Full Throttle battled hard in a ten pitch at-bat before grounding out. That at-bat changed the course of the game irrevocably and should be commended.

Barry Bonds has a word of gratitude:

Thank you to the @SFGiants, my family, friends, and fans for making this day so memorable. I’m so thankful for this moment and to have been able to share it with all of you right here in San Francisco. Thank you for making my dreams come true! #forevergiant #bonds25 pic.twitter.com/7iPSiUQY2F