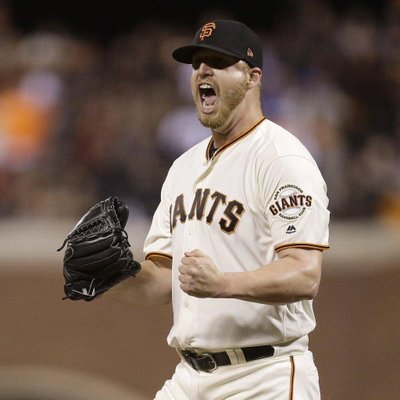 This has not been a good week for the Giants. Following their best series of the year, a convincing road sweep of the Diamondbacks, the Giants swaggered into Coors Field and scored three whole runs in three games, most galling of all allowing Stud Rookie #1, Andrew Suarez, to take a most undeserved loss on the wrong end of a 1-0 score. Then rock bottom got even lower as the much-anticipated return of Johnny Cueto to start the homestand turned out to be arguably the worst game of the season.

The entire lineup went cold all at once, Chris Stratton got pounded for the second straight time, and the middle relief types weren’t holding it together, either. This is the type of week that really makes you wonder what kind of a market is out there for the Giants’ impending free agents. (If you’re keeping score at home, that’s Hunter Pence, Andrew McCutchen, Nick Hundley, and Derek Holland, and yes, I understand that there is zero market for Pence.)

So last night’s game, while not a return to form–whatever “form” is for the 2018 Giants–was a relief. The Giants hit and scored just enough. Stud Rookie #2 (Dereck Rodriguez) was studly again. And the relievers, Moronta, Watson, and Smith, did their thing. The sequence that led to the game-winning run started with a pinch-hit by Hunter Pence and an RBI single by McCutchen to score Pence. Pablo Sandoval contributed an opposite-field homer in the sixth.

The worst news of the game was the injury to Joe Panik, which happened as he was running the bases. You can see him in the clip grimacing and slowing up as he rounds second. Bochy didn’t even wait for the MRI to announce that Panik would be going on the DL (from Matt Schneidman’s gamer for the SJMN):

“He did a pretty good job on it,” Bochy said, referring to Panik’s injury. ” … It’s a DL situation.”

Although Panik had been scuffling at the plate for awhile–hitting .233 for June and just .150 in July–this is really bad news. Yes, the domino effect is that Austin Slater will finally get some playing time and Alen Hanson will settle into a defensive position where his glove can be less toxic. But these are the fallback plans, not what you hope will happen when you start a season. For left field, Hunter Pence was Plan A and then Mac Williamson was Plan B. Now, Slater deserves a shot to see what he can do with some regular playing time. As for Hanson, he’s been a shot in the arm with his bat, but can he keep it up over weeks and months of regular playing time?

The Giants’ outfield defense has been pretty bad overall (26th in the majors to date), and it was bad last night. Both of the runs allowed by Rodriguez, one of which ended his night and cost him a chance for a win, were “aided” by inept outfield defense by Hanson and McCutchen. I felt like an awful person breathing a sigh of relief to see Slater come into the game to play left field after Panik exited with his injury. But it was short-term relief–one game/five innings vs. probably at least a month before we see Panik on the field again.

Because of the injury to Evan Longoria, the Giants were already deploying Hanson somewhere everyday, and they don’t have much depth to replace Panik. The smart money, I presume, is on the return of Kelby Tomlinson (again), though it would be a little fun to see them give Chase d’Arnaud a short-term look. d’Arnaud is having a nice year for the River Cats and was named to the PCL All-Star team. For the year he’s hitting .292/.393/.522/.915 with 12 homers, 14 doubles, and 15 stolen bases in 18 attempts. This year he’s played every position except pitcher and catcher–and more at 2B than anywhere else. Of course, adding d’Arnaud would require a 40-man move, so…probably not happening.

Johnny Cueto was so good before he went out with his elbow injury that it’s understandable we’d all hope that he’d pick up right where he left off at the end of April. He was good in his two rehab starts, allowing 0 runs. Samardzija–different story. He had a bad spring and couldn’t answer the Opening Day bell, rushed back too soon in April due to the injuries to Bumgarner and Cueto, and pitched to an ERA well over 6 before going on the DL again. His rehab starts this time have not been especially reassuring, either, though his last one was decent (six innings, two runs). So it will be ironic if Shark comes out and dominates today. Baseball can be funny that way.

The more interesting question surrounding Shark’s return is which younger pitcher loses his rotation spot. It seems pretty obvious that it should be Chris Stratton, at least at this point, but where do the dominoes fall after that? Does Stratton go to the minors? Does Ty Blach, putting Stratton into the bullpen for now?

It’s Crazy Crab Scarf Day at the park, so I’ll leave you with this deep thought from Madison Bumgarner.  Lefty out.