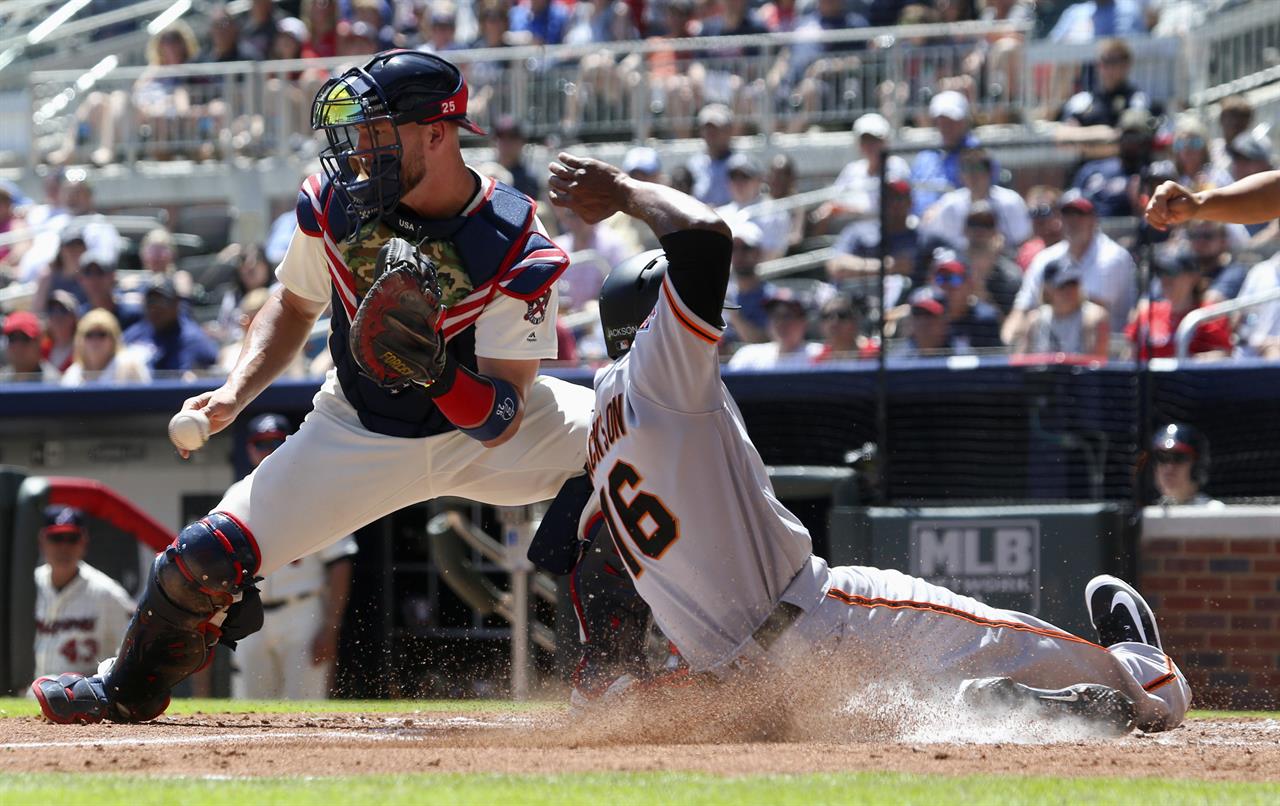 Sweep! That sound so sweet. The tomahawk chop chant was silenced by the San Francisco Giants in Atlanta. Coming into the series the Braves were the talk of baseball having won five straight after sweeping the ailing Mets in Queens. Yesterday Andrew Suarez earned his first Major League win and the Giants held on to win 4-3. Hunter Strickland did his best Brian Wilson impersonation to make things interesting in the ninth as he allowed two runs and stranded the tying run on third after Ozzie Albies fouled out checking his swing on a perfectly located fastball about chest high that was unhittable. That last out was an example of excellent pitching and scouting. The Braves love to attack first pitch fastballs and were doing so in abundance throughout the series. Albies was aggressive in a critical situation and Strickland’s pitch utilized that approach against the Braves rookie perfectly.

The aggressive and highly touted athletic baby Braves were no match for the seasoned and very athletic Giants.

Players like Alen Hanson, Grego Blanco and Pablo Sandoval all had big hits and utilized their speed and athleticism (ok maybe no so much Pablo’s speed but he is athletic in a baseball way) to score on close plays at the plate, take the extra base and push the Braves to the limit with their bullpen.

Braves starter Michael Soroka had bouts of loss of command throughout his four innings pitched as he threw 84 pitches. He threw over 60 in the first two innings as the Giants would not chase pitches outside the zone and put up many more disciplined, smart at-bats. Andrew McCutchen raised his average to .246 with another hit.

Alen Hanson is the story of the weekend however. The Giants backup second baseman went 2-4 and scored on another close play at the plate that was a carbon copy of his gorgeous slide into home on Friday, just beating the tag by the Braves catcher, Tyler Flowers after a throw from an infielder, in this case, Freddie Freeman. Most mortal men are out on the play but Hanson’s speed, slide and excellent jump were simply too much. It was a huge play in the game and it demonstrated how fast this Giants attack is with Blanco, Jackson and Cutch contributing to the speed quotient.The Dominican was signed as a free agent by the Pirates in 2009 and was considered one of the top prospects in all of baseball. His baseball skills, speed and power are something to behold and demonstrate why his stock was so high at one point.

The Giants have suddenly become a very athletic team that runs well and can hit for a bit of pop. The most impressive thing about this sweep for me was how well the Giants bench and role players played throughout the three games. The second most impressive aspect of the series was how well the starting pitching held up in a hitters’ park against a flaming hot team. Stratton, Blach and Suarez, all home-grown Giants, demonstrated the ability to minimize damage and keep the Giants in the games till their hitters could come back, utilize all fields, and find ways to exploit the inexperience and wildness of the Braves starting pitching.

Last year that’s Ryder Jones getting thrown out and the wind being taken out of the sails for the Giants.

Hanson has been a revelation, hitting .324 and contributing exciting plays and huge hits. Once he tightens up his fielding he will be a superb player and one the Giants may have to find a place for in the everyday line up. Kudos to the scouts and Bobby Evans for that huge under the radar pickup.

Mac Williamson is feeling a bit woozy still from his concussion and his virus. He is day-to-day. The Giants are suddenly the most exciting team in the National League as well as the hottest team in the NL having gone 8-2 in their last ten games.

The Giants are now 15-9 and have won their fifth straight series, all since my return from Greece.

Tonight they take on the youthful and exuberant Phillies of Philadelphia. Jeff Samardzija pitches against Zach Eflin. Game time is 7:05 Eastern.

One note about our community: I grew more than tired with The Oracle’s schtick so he is now permanently banned from this site. This blog exists for Giants fans to show their fandom and support for the team. While being critical and at times emotional is allowed, continued hate, insults, and overall nastiness will not be tolerated. If you need to constantly belittle, insult, and demean others and the team then it’s time to take a hard look at your life and re-think your priorities. Life is too short to be stuck in a negative rut. Baseball should be fun.