Time for Bruce Bochy to Go? 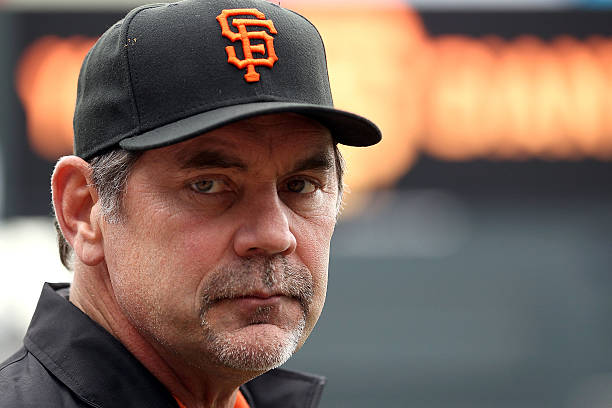 Ugh, I don’t really want to post the box score, but if you insist, here’s the link.

Since the last time I posted (hoping the Giants would “sustain some momentum this time” after a nice Friday night win), the Giants have lost five out of six and they only got the one win because the Mariners were generous and Pablo Sandoval hustled. I guess we should be grateful that the Giants mostly stay in games until the late innings or even the last out. Yet here we are again, 2-5 since the All-Star break, and every one of those losses was a winnable game in which the Giants were tied or even ahead by the seventh inning or later.

So what’s gone wrong, and why my s**t-stirring headline? Stay with me. One could point fingers in various directions, but the obvious key to everything is the Giants’ lack of ability to mount offense, especially early in games. The Giants went four straight games out of the break without even getting a hit, and in some cases, a baserunner, until the fourth inning or later. That puts extraordinary pressure on the starters, every single night, to put up early zeros and keep things close until the bats decide to show up, maybe around the sixth inning. And for the most part, they have done an admirable job. Here’s what the starters have done since the All-Star break:

Yes, we could point some fingers at the bullpen. Melancon came in twice in the eighth inning, once with a one-run lead (in Oakland) and once in a tie game. Those resulted in a blown save and a loss for Melancon and two losses for the team (more on him below). Will Smith gave up the walk-off hit on Saturday in extra innings. Blach (aided by a bad bounce away from Crawford) took a walk-off loss on Sunday. But when a bullpen has to come in night after night and eat up multiple innings with no margin for error–a run ahead, tied, a run down–over time, it’s not always going to work out. Give this deep and varied bullpen say two or even (gasp) three runs to protect, and I bet they’d look pretty good.

So the starters are doing their job, actually remarkably well considering the mental pressure of never, ever getting early run support (or, if they do, they get one piddly run like Bum did last night), and the bullpen comes in knowing they can’t ever make a mistake.

Nah. This is not on the pitching staff. This is on the offense.

This was Kerry Crowley’s lede in his gamer after last night.

SAN FRANCISCO–Fewer than 12 months after Matt Cain threw his final pitch for the Giants, the franchise will honor Cain and two of his former teammates with plaques on the Wall of Fame outside AT&T Park.

The ceremony isn’t scheduled to begin until Saturday afternoon, but the Giants’ offense paid tribute to Cain’s career Friday with another lackluster effort in a 3-1 loss.

After another lifeless night, Bochy said the lineup needs to “compete harder.” This is a group that can seem to float aimlessly for weeks at a time, and Bochy preached urgency.

“It’s got to happen now,” he said. “We can’t keep saying there’s a lot of baseball left.”

It’s also fair to observe that the Giants haven’t exactly been facing Kershaw, Scherzer, deGrom, or Sale in this stretch. These games they’ve lost have been started by guys like Edwin Jackson, Chase Anderson, and Mike Leake, and they even caught a break when the Mariners’ stud Paxton had to be scratched on Tuesday. Other than Manaea for the A’s on Sunday, not an ace in the bunch.

So is Bruce Bochy really to blame for all of this?

Eleuthero argued on the previous thread that Bochy is actually doing a good job because the Giants’ run differential suggests that they should be doing even worse than one game under .500. One could also point to the myriad and serious injuries they’ve sustained to key players. (Really, what are the odds of the ace, the closer, and the third baseman all breaking the exact same bone within a three-month period–and all by different methods?)  But here’s my three-part argument as to why in my opinion Bochy isn’t doing his part to right the ship.

Friday’s loss showed a flaw that isn’t often talked about. The Giants don’t hit a lot of homers, and that has been the focus in recent years when discussing their offensive woes. But they rarely do the little things, either, and on Friday night they were beaten by a powerful lineup that played small-ball.

This is particularly irritating because, for once, the Giants have some speed on the team in Alen Hanson, Steven Duggar, and Chase d’Arnaud, and when he’s around, Kelby Tomlinson. McCutchen and Slater can run decently, too.

2. Bochy is being rigid about his bullpen management. Several examples from the last week come to mind. Mark Melancon has done absolutely nothing to be trusted with high-leverage late-inning situations. But twice in this post-All-Star stretch, Bochy has turned to Melancon in the eighth inning, and both times it cost them the game. A more subtle example happened in two recent games against the A’s, one right before the break and one right after. Derek Holland was pitching in middle relief and both times was just lights-out. But instead of letting Holland, a starter who can easily go multiple innings, keep at it, Bochy pulled him for another lefty, Tony Watson. Again, both times it was a decision that ultimately led to a loss. Now, this is a more defensible choice than using Melancon because Watson has for the most part been very reliable this season. But he’s faltered some lately–including a blown save in a game with the Cubs right before the first series with the A’s–and the bigger point is that there was no need to pull Holland in those games. It seems like the decisions are made more on autopilot than on the feel of how a game or a week is going.

3. Bochy can no longer get through to his players. I just began a hitch as department chair, replacing a guy who’d been in the position for seven years. It was too long. He was over it and everyone else was ready for a new voice. At some point they’ll be over me, too, but hopefully I’ll be smart enough to exit the office before that happens. This is Bochy’s 12th year as manager of the Giants, and he’s been a big league manager for well over 20 years. This explains some of the old-school, rigid decision-making, though to be fair, he’s had a great deal of success with this style in the past. The bigger issue right now is that this team has been playing bad baseball for over two years now, starting with the bewildering tailspin they went into after the 2016 All-Star break, the horrific 98-loss season in 2017, and now a season where they’ve had one winning month (their first in two years) and no winning road trips. They’ve tried firing coaches (after both 2016 and 2017) and changing the mix by bringing in guys like McCutchen and Longoria, but nothing is working.

No, it’s not all Bochy’s fault. Injuries are not his fault and lack of roster depth or talent is not his fault. It may also be time for Brian Sabean and Bobby Evans to move on, too. But the glaring fact is that Bochy’s not successful in the present (with “present” lasting over two years now) and he’s the wrong guy for the future. His stubborn refusal to play Austin Slater consistently is a great case in point. The Giants have two veteran outfielders who will be free agents after this season. Slater has more than earned playing time in the major leagues, and the team needs to think about 2019 and beyond. Bochy can’t or won’t see that, and it’s not the first time, either.

I actually think it might be best for this team’s future if Bochy was told to take all the time he wants on his trip to Cooperstown tomorrow. Replace him with Hensley Meulens or Ron Wotus for the interim and look for a permanent manager in the off-season, hopefully a fresh voice from outside the organization. That might allow them to salvage a few things in the last 50-something games of this season to build on for upcoming years.

I’m not kidding myself that this will actually happen, but I’m just putting it out there that this might truly be for the best.

Other things that would help

Henry Schulman had a good Twitter thread last night that I thought summarized the realistic options well. (You can click on the tweet below to read the whole thing.)

Look. Last I checked, tweets are free. You can tweet SELL SELL SELL till your fingers fall off, but that’s not their mindset now. There’s also a difference between “selling” and “SELLING.” Let’s day for the sake of argument the #sfgiants actually took a long, hard look in ….

The Giants won’t sell their core guys–not Posey, not Crawford, not Bum, and probably not even Belt–but there’s no reason at this point not to take offers for guys like McCutchen, Holland, Hundley, and Dyson. The first three will be free agents, and the Giants can fill in without them next year, either from the system or from free agents. Dyson is still under team control, but he’s had some success lately, is pricey for a bullpen guy, and might have value to a contender. And again, he wouldn’t be that hard to replace before 2019. Trading those guys lowers the payroll and opens opportunities for younger guys. In the case of McCutchen, it gives them a chance to take a nice long look at Slater, Shaw, and Williamson to see if any of them will work in the corners for the future. If not, then you know what you need to shop for in the winter. In the case of Holland, you bring back Chris Stratton and see if he can rediscover what was working late last season and early this season, and if not, you go to Shaun Anderson, and if not him, you shop for a low-cost starter like Holland in the offseason. With payroll savings from those guys, maybe you can trade, this week or in August, for a player who can help you in 2019. Or just save the cap room for holiday shopping.

A few bright spots in the minors

All was not dark and sad last night. We were at the River Cats game last night, as were the Sarcastics, and saw Chris Shaw hit his 21st homer. It also occurred to me that Mac is pushing 20 homers if you combine his AAA and MLB numbers, even having been derailed by a concussion, and he made a nice running catch and then throw from right field for a double play. Joe Panik had two hits, and it was nice to see him back on the field. Ryder Jones made a couple of really snazzy grabs at 3B, too.

Heliot Ramos (Giants’ #2 prospect and #87 on MLB.com) had the walk-off hit for Augusta. And Joey Bart continues to pulverize the Northwest League, hitting two more homers last night. He now has nine in 18 games for Salem-Keizer. That does not lead the NWL, but the one guy ahead of him (with 11) has played twice as many games. I’m guessing Bart will get bumped up to San Jose at some point–I sure hope so.

If you’re anywhere near the ballpark this afternoon, this would be a super-cool thing to attend.

My usual sign-off, “Lefty out,” is in honor of Ryan Vogelsong’s “Vogey out” at the 2014 parade, and since he’s being honored today, I’ll say it with more enthusiasm: Lefty OUT!