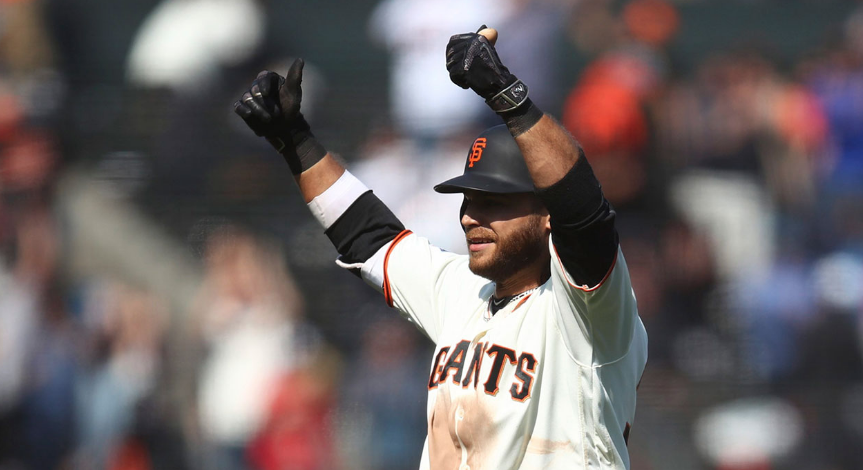 Giants storm from behind to win thrilling ten inning game 5-4, over Diamondbacks

Wow! Just wow! Ok, I am late with the story of this game but I don’t want to forget it. Let’s start with the genius behind BCraw’s heroic at-bat that produced the game-winning hit to drive in Cutch with two outs in the bottom of the tenth. The DBacks were trying to hurriedly warm up a new reliever so they elected to pitch around Crawford by throwing him four straight balls. The Giants shortstop knew this and swung at the third and fourth pitches to keep the at bat alive. A fifth pitch, a center cut curve, was smoked into right to win the game. That’s pretty brilliant. He essentially baited the DBacks into throwing him a strike after they originally wanted to walk him. Because there was not enough time for the reliever in the pen to warm up the Arizonans did not elect to walk Crawford automatically with no pitches being thrown.

Then there’s Alen Hanson, or “Superman” as Surf Maui has dubbed him. Where did the Giants find this guy? Everything he touches turns to baseball gold. His powers, smarts, speed and athleticism have produced pure baseball genius. His two-run, two-out pinch hit home run in the bottom of the ninth to tie the game was epic and beautiful. The Dbacks and their closer, Boxberger, had produced a two up two down ninth. Mac Williamson represented the final hope for the Giants. He proceeded to work a tough walk to extend the inning and provide the stage for Hanson.

Chris Stratton was laboring and battling all day. His totals were not great but he was also victimized by his catcher.

Nick Hundley had a difficult game defensively. His inability to catch, an albeit very difficult, foul pop swirling in the sun and wind  gave new life to Daniel Descalso who then hit a bases loaded two out two run single to crush the spirit of the home fans on the very next pitch. Of course, Chris Stratton was the one throwing the pitch.

For those who want Buster Posey to play first base exclusively, please re-watch this game.

I love Nick Hundley and I am a big fan of his. His bat and leadership as a backup catcher have been instrumental in many wins this year and last. It was just not an easy game for the Giants backstop.

From Descalso’s hit till the bottom of ninth the Giants and their fans appeared dead in the water. There was no life in the park and in the Giants at-bats.

The Giants went 5-1 on the homestand and the two game swing in the standings meant the Giants are now 1.5 games back of the DBacks and Rockies and have reached .500.

This is a Giants team with heart and they are fun to watch.