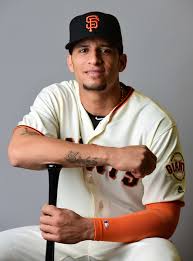 I woke up, remembered it’s Saturday, and started thinking about my post. I’m struggling a bit. It’s not quite as bad as in, say, January, when we’d go weeks on end, not only without any Giants news but pretty much no baseball news, period. Imagine how the baseball writers must have felt, with nothing to write about except (a) why the free agent market was so slow and (b) Bonds and Clemens not getting enough Hall of Fame votes for the sixth year in a row.

The Giants have played just four games in the last seven days, and nearly 72 hours will have elapsed between the start of the Giants’ second home game against Seattle and today’s 3:05 p.m. first pitch. The minor leagues have only been going for two days, and even MLB had only nine games (including the Giants’ rained-out one) scheduled on a Friday night. The entire baseball season is, to use Bochy’s term, being “slow-played.” It’s time to get it going.

Here are a few mostly unrelated musings about the Giants and their minor league affiliates.

The bench has been pretty good

Yeah. The best game of the year so far, with respect to those two nail-biting 1-0 wins, was Wednesday’s 10-1 drubbing of the Mariners and “King” Felix, who may need to be demoted down to “Sir” Felix after that performance. Team Venezuela (Gregor Blanco, Gorkys Hernandez, and Pablo Sandoval) were all in the starting lineup, and they brought some energy and made some noise: 5 for 13 with two homers and 5 RBIs. It started, oddly enough, with Sandoval drawing a bases-loaded walk in the first inning to extend a rally and bring in the first run (of many to come). The biggest hit was this three-run water shot by Pablo, putting him, at least for now, second on the all-time splash hit list (one ahead of Belt). The one that made Matthew the happiest was this solo shot by Gorkys, who gets the coveted “featured image” slot up top today.

The bench overall (Hundley, Tomlinson, and Team Venezuela) is so far 11 for 31 with 2 HRs and 5 RBIs. That is better than the starting position players as a group are putting up. And that’s just hitting. Having Gorkys and Blanco in the outfield (with McCutchen in right) is a defensive upgrade over anything the Giants put out there last year.

There were two balls hit to the outfield that inning that drop for hits last season. Hernandez chased one down, McCutchen got the other.

Andrew McCutchen catches a ball in deep right-center. Last year, that's one of the major league leading 58 triples the Giants allowed (their most since 1977).

Panik and Belt are a great 1-2 punch

Other than bench players, the two guys off to the hottest starts are Joe Panik (.381/.458/.810/1.268) and Brandon Belt (.353/.450/.588/1.038) with a combined four homers, a double, and six walks. This is notable considering that the Giants have faced lefty starters in four of their six games so far. The two of them together at the top of the order are a nightmare for starting pitchers, with Panik being the hardest guy in the majors to strike out over the past couple seasons and Belt’s typical OBP north of .350. Now the middle-of-the-order guys, McCutchen (.083, 0 RBIs) and Posey (also 0 RBIs), need to step up and make some things happen.

OK, maybe the Giants did need some new coaches

I’ve been vocal, ever since The Great Coaching Purge of last October, about how much I disdained the practice of making underlings be the fall guys for the failures of the head honchos. In principle, it still bothers me. In practice, and it’s early yet…maybe the Giants did need some new ideas. The biggest story so far is Panik’s unexpected power to go along with his pristine plate discipline. In several articles this week, including this one by Alex Pavlovic, Panik credits the new hitting coaches with encouraging him to adjust both his approach and his batting stance. Posey also, in a recent interview with Tim Kawakami, cited how new hitting coach Alonzo Powell has been discussing his approach with him.

Then there’s the pitch-calling. Here are some thoughts from a Baggarly column (linked for convenience, but behind a paywall) a couple days ago:

If you could criticize Buster Posey for one thing, it was that he could get too fastball-happy at times while calling pitches. Posey is very smart and also very old school in many of his baseball sensibilities. “Establish your fastball” is something he had drilled into his head. He was once a pitcher, too, remember?

We’re seeing some subtle changes this season. Posey is showing a greater willingness to pitch backwards with guys, whether it’s a starter or a reliever.

Now, Buster’s a bright guy and a student of the game. Are these “pitching backwards” insights his own, or did they emerge from conversations with the new pitching coaches? Dave Righetti had been in his job a long time, and it’s not a stretch to imagine that he had old-school ideas that were imparted to a young catcher when Posey arrived on the scene in 2010. Did the arrival of new pitching coaches help Buster to think more out of the box than he had been in the past?

Who will be the #5 starter?

Even with last night’s rainout, the Giants will need a fifth starter no later than April 11. Who will it be? The Giants clearly hadn’t made up their minds as of Thursday, sending Tyler Beede to pitch for San Jose while Andrew Suarez started for Sacramento, lining either up for a major league debut on Tuesday or Wednesday. Beede is on the 40-man roster, so it would be easier to import him for a start or two (depending on how Jeff Samardzija comes along), but the sense seems to be that Suarez is the more ready of the two, after a strong 2017 season. Their two outings Thursday night did not shed much additional light, as they were quite similar (one hit allowed by each, a few walks, a few strikeouts), though it’s worth noting that Suarez was facing AAA hitters and Beede was not.

My guess? Suarez. They won’t let the 40-man issue stop them because chances are they’ll need Suarez at some point this season, anyway, and he’d have to be added after the season to avoid Rule 5 exposure in any case. Besides the fact that Suarez’s recent track record is better than Beede’s, he’s also left-handed, and with Bumgarner out for a while yet, and Blach and Holland being arguably the weakest links among the ambulatory starters at this point, they might want to take a look at Suarez sooner rather than later.

Welcome to the big leagues, kid. Have you met Paul Goldschmidt? Don’t worry–he’s off to a slow start (.091).

The minor league season kicked off ominously for the Giants, with all four affiliates, all on the road, losing their Thursday openers. Things looked up last night, though, with AA Richmond and AAA Sacramento getting nice wins. Though the sample sizes are ridiculous so far, here are a couple of early notes:

At this point, HaakAway would like to remind you that this year’s MyGuy™ picks are due April 22 (Clark/Clark/Cutch Day). Pick a position player and a pitcher from the major league roster and from each of the four full-season minor league teams (Augusta, San Jose, Richmond, Sacramento) to be your “Guy” for the year, with points allotted for year-over-year improvement and bonuses for promotions. You can register your picks by replying to any HaakAway post or by emailing him at mysfgiantguy@gmail.com.