The 2019 World Series: What Just Happened? 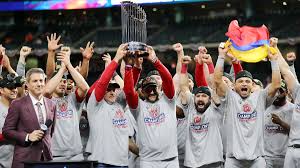 The Washington Nationals have turned the Major League Baseball World upside down with their dramatic and improbable 2019 World Series victory. The Washingtonians are the first team to ever trail in four elimination games and win them all, in one postseason. That’s just not done in this day and age with specialty relievers and starter pitchers coming in to save games.

Most incredible about the W’s win is that they accomplished it with an older team of many veterans. They are by average player’s age, the oldest team in baseball. They were built in a very old-school fashion with a combination of major blockbuster trades and epic draft picks. With Bryce Harper departing for Philly, this year’s team was expected to perhaps experience a slight drop-off in their win total, and they did. What gave the Nationals a magical run was their hot streak combined with the epic pitching of Stephen Strasburg. Does that sound like any team you know? Maybe the 2014 Giants?

For all the parallels and similarities there is a great difference between the two teams as well.

What I find most gratifying about the Washington Nationals championship is how they fundamentally challenged the current conventions of baseball with the production of players over 30 and their embrace of starting pitching as the foundation of all their wins. It’s good to see a National League team beat an American League juggernaut.

Remember that the Nationals had a historically bad bullpen for most of the season. Remember that old-school National League baseball of pitching and defense was supposed to be out of fashion, worse, obsolete and no longer applicable in the age of the home run.

While it’s true that the Nationals also hit their share of homers, what most impressed me about them, and what it means for us Giants fans is simple: there is more than one way to win a World Series and maybe, just maybe, the Giants can win with a similar recipe today, just like the one they employed in 2010, 2012, and 2014.

What the 2019 World Series shows us all is the importance of playing your best in October when the games matter most. It is possible, if not likely, that the Astros underestimated the Nationals. Those of us who watched Washington play during the season and in the early stages of the postseason may not be all that shocked by the outcome however.

This is one of the rare times you will ever hear me pat myself on the back (I am the same guy who said the Giants would win 98 games in 2017, after all (insert sad face icon)).

I picked the Nationals in seven!