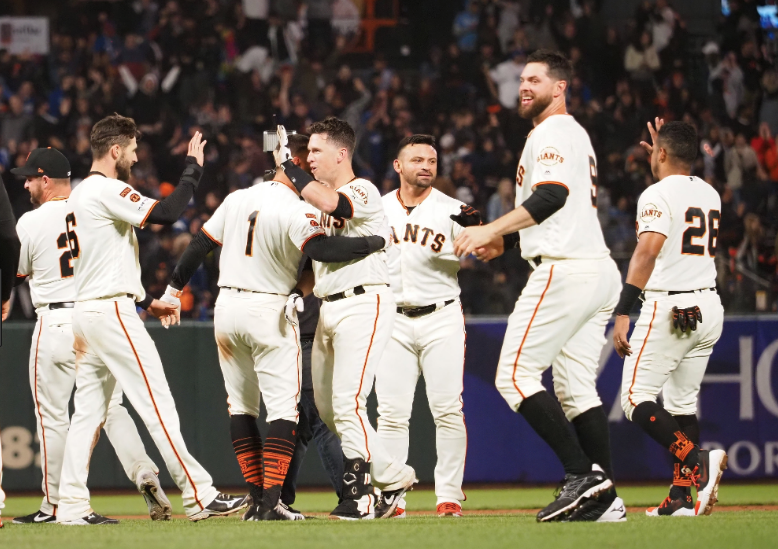 Buster Posey is back doing Buster Posey things and the Giants are back to their winning ways. His two out single in the bottom of the ninth drove home Steven Duggar to give the Giants a dramatic series win over the dreaded Dodgers. The winning run scored on a very close play at the plate and sent the 31,000 fans home ecstatic. Duggar scored both runs for the Giants in this old-fashioned pitcher’s duel that saw Madison Bumgarner pitch six superb innings with eight strikeouts in which he allowed only one run. Hyun-Jun Ryu was equally dominant, going eight innings and giving up only one run.

The #SFGiants‘ 2-1 victory over the #dodgers on Wednesday night might be remembered in the short-term for the excitement of Buster Posey’s walkoff hit, but the longer view might be even more important: Madison Bumgarner finally looked like the old MadBum. https://t.co/2hUvrUc21H

The Giants desperately need this game to gain a little confidence after losing four of the previous five games on the homestand.

Duggar had three hits in the game and raised his batting average to .241. The young outfielder has been very solid in the outfield and has occasionally verged on spectacular. If he can keep his momentum going at the plate with professional at bats and utilize his speed on the basepaths Mr. Duggar will be a very valuable player indeed for the Giants renaissance with Mr. Ramos and Mr. Bart waiting in the wings.

Buster Posey is slowly putting up better at bats as well as he begins driving in a few runs and looking a little more like his old self at the plate.

This was an interesting game in that it represented two eternal Giant World Series heroes (Posey and Bum) playing a key role while Steven Duggar, the face of the Giants future, also figured prominently in the victory. In some ways it can be viewed as a trans-generational game. Check out this box score in six years and think about what it means to see Duggar and Posey in the same game…

The Giants improved their record to 13-18 with the win. They are off today as they prepare for their demolition of the Cincinnati Reds in Ohio.