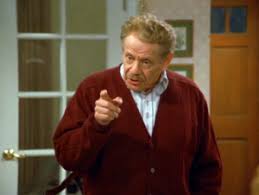 I got a lot of problems with you people, and now–you’re gonna hear about it.–Frank Costanza, Seinfeld, “The Strike,” 1997

Yeah, yeah, yeah, I know Festivus isn’t until December 23, but is there ever a “wrong” time for a little wisdom from Frank Costanza?  I say there isn’t.

The Giants have won two (2) games in the month of August, and now all the national pundits and a good portion of the Giants’ fanbase are sneering and pointing and saying “See? See? I SAID they should have traded Bumgarner and Smith!”

Well, no, they shouldn’t have. In the two (2) wins in August, guess who pitched in both of those games? Yep–Bumgarner and Smith. And we’re good fans and deserve some nice things.

(And don’t start with me on “Well, Houston tanked and now they’re great and yada yada yada.” The Astros had a zero [0] rating share in Houston back around 2012-13. And I for one don’t want to put up with 3-4 years of dreadful. I remember the mid-00s quite well, thanks.)

This week has been a real teeth-gnasher. First they roll over and die against the back-back end of the Nationals’ rotation, leading to a depressing sweep in which it seemed like they played exactly the same game three times. Then they mounted an inspiring comeback after Tyler Beede (we’ll get to him) put them in a huge hole, scored six runs–and took the lead for about 3.5 seconds. Thanks, Tony! (We’ll get to him, too.) Worst of all, we had to watch Bryce Harper, after rejecting us in March, rub it in our faces.

So I have a few grievances to air about last night’s game.

The “Lefty Rage” knife makes its first appearance of 2019

Beede is not only MyGuy™ in this year’s contest, but I’ve been a fan and supporter ever since he was drafted. I followed his excellent AA season in 2016 on MiLB.TV. I’ve met him at Raley Field before a River Cats game. I even was in the same restaurant in Scottsdale with him and his family a couple of spring trainings ago. I also appreciate the thoughtful interview he did with Greek Giant in the early days of TWG.

Tyler Beede is pissing me off and making me crazy.

Beede is finally getting his major league opportunity. His time is now. And the Giants need him, a first-round draft pick with great natural ability, to settle in and be a consistent presence in a thin rotation made up mostly of green rookies and the always enigmatic Jeff Samardzija (and, thank goodness, Bumgarner). Beede was good, overall, in July. He was good in the first inning last night, making Harper look silly on an outside change-up for a swinging strike three.

Then he…I don’t know…lost his focus? Got overconfident? Something. In the third inning, he walked pitcher Drew Smyly, a guy with a .000 batting average, didn’t transition well to throwing out of the stretch (to put it politely), and things imploded for a four-run inning. The Giants battled back and whittled the deficit down to 4-3, but then Bryce Harper took Beede deep. By the time Beede slunk out of the game, pinch-hit for by Bumgarner(!), he was trailing 5-3, and another start that had begun so promisingly was another #fail.

Honestly, I’ve had it with him. Matthew said last night that Beede is mentally soft, “another Atlee,” and that’s going way back, but it’s a good call. You really do wish that a grinder like Ty Blach (when he was still a Giant) or Shaun Anderson could magically be gifted with Beede’s tools, because Beede is wasting them. If they weren’t so tapped out in their rotation, I’d send him down to AAA for the rest of the year and maybe forever.

Watson came into the top of the seventh with a one-run lead that the Giants had suddenly and magically acquired in the bottom of the sixth thanks especially to a monster Cove shot by Stephen Vogt, whom I absolutely do believe in. (After his three legs of the cycle last night, Vogt is hitting .284 with an .885 OPS this season, including six homers and 19 doubles in just 162 at-bats. These numbers are substantially better than his career averages. He’s having a tremendous year at age 34 after missing all of 2018 with a shoulder injury.)

Anyway, Watson reminded us that he used to be a Dodger, and–nah, I can’t do this. Watson has had a fine couple of years as a Giant, and he just had a bad night. Happens to everyone, even the good ones. Unfortunately, the big blow came–again–from Bryce Harper, who hit a three-run homer into the Cove. Back to him in a minute.

You know those inspiring six comeback runs? Well, no thanks to Posey, Crawford, or Longoria for any of those, unless you really want to give Posey credit for being safe on an error and scoring on Vogt’s homer. The “core” of the lineup went a desultory 0 for 13 last night. Crawford’s ABs have looked dreadful this week, and as for Longoria, he just doesn’t look like he’s ready to be back in the lineup. He doesn’t seem like he’s moving well in the field, either. When Bumgarner, who didn’t even pitch, had a better night at the plate than you did, maybe it’s time to have a meeting with yourself (hat-tip to Greek Giant’s post a couple days ago).

It’s been this way for awhile. The Giants’ great July was fueled by rookies like Yastrzemski and bench guys like Sandoval and Vogt, not the guys who were supposed to be the core of the lineup this year (the three above, Belt, and Joe Panik when he was still here). This is not sustainable, and it’s a problem not just for right now but for the next two years (as to Belt, Crawford, and Posey) and another one beyond that for Longoria (ugh).

The problem is not really about money. Especially after Farhan Zaidi managed to unload $27 million or so of present and future costs by trading/DFAing Mark Melancon, Sam Dyson, and Panik, the Giants have plenty of room to try to re-sign Bumgarner, Smith, and Vogt, all of which they absolutely should do, and maybe Pablo, too, and add some new free agents. The problem is that the underperforming “core” is clogging the roster and the lineup. If I’m Zaidi, I’m thinking long and hard about how to get myself out from under some of this, if not all. (I think Buster finishes his career in a Giants uniform, and that’s as it should be.)

Last but not least in this Airing of Grievances is…

Bryce Harper is a tool, and I’m really, really glad he’s not a Giant, even after last night. I’ve always thought he was a tool. I had reluctantly rooted for the Giants to be successful in their pursuit of Harper last winter, but that was mainly for short-term entertainment value, not because I truly thought it was a good idea. I generally do think he’s overrated ($330 million and didn’t even make the All-Star team), and 13 years is a ridiculous amount of time to be stuck with anybody not named Babe Ruth or Mike Trout.

After Harper hit his first homer last night (off Beede), he made a big show of “shushing” the Giants fans. I guess he knew it was a d**k move (not to be confused with our Dick or even theirs) because he tried to make excuses for himself after the game and even said some nice things about Giants fans in general.

Seriously. SERIOUSLY? You play for the Phillies, with the nastiest fanbase in the game, and you think you’re entitled to obnoxiously “shush” Giants fans just because they hurt your widdle feels by booing and heckling you?  Ask Jeremy Affeldt to tell you the story of how the Phillies fans by the visitors’ bullpen brutalized him when he kept warming up while benches cleared in Game 6 of the 2010 NLCS. Oh, and remember how they treated Tim Lincecum in Game 1?

And this is how former Phillie Pat Burrell, who won a championship with them and hit over 250 home runs while wearing their uniform, was greeted in that series.

Phillies fans “welcome back” Pat Burrell in the 2010 NLCS

So no, Bryce, you don’t get a pass for your douchey behavior because Giants fans are “mean,” you Millennial snowflake.

Here’s what I think of Bryce Harper, for real. He’s a loser, not a leader. So he hit two homers off Hunter Strickland in the 2014 NLDS? The Nats still lost that series in four games. Won an MVP? The Nats got bounced in the first round that year. In fact, the Nats always got bounced in the first round during Harper’s tenure there–when they made the playoffs at all. And for all the hoopla about Harper’s signing with Philly, he wasn’t even an All-Star and the Phillies are about as unlikely to make the playoffs as the Giants are at this point.  Yes, I know baseball is a team sport, and you can’t blame Harper alone for all of those failures, but he’s the one who’s embraced the generational talent/larger-than-life persona–and he’s not living up to it.

I predict the “good fans” of Philly will thoroughly hate Bryce Harper long before 2032 rolls around.

OK, I think I’ve Aired enough Grievances for one post. I feel better–don’t you?

Samardzija is old school, and if it hadn’t been for Mike Morse’s head getting in the way, he might have dismantled Bryce Harper back in 2017. I won’t be stunned if something hard and close goes in Harper’s direction. Not that I’m condoning violence. Just saying. Lefty out.