Breaking On Through: Giants Capture First Victory of 2019 in Dramatic Fashion, 3-2 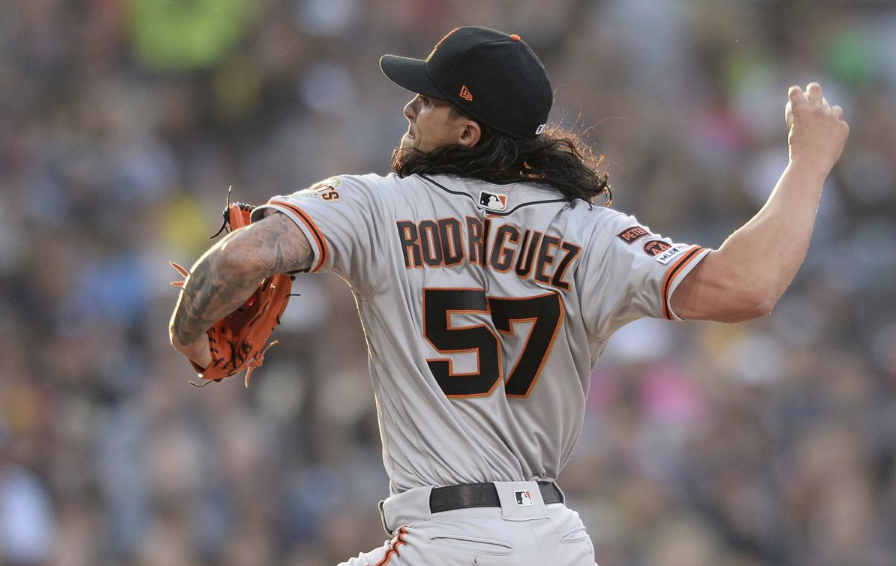 I watched every pitch of this young 2019 season and last night’s dramatic 3-2 win over the Padres and here are my conclusions, listed as bullet points:

Reyes Moronta was one of the big heroes last night coming in and pitching two dominant shutout innings after the Padres scored two runs to make the Giants 3-0 lead evaporate quickly. Last night Dereck Rodriguez put on another demonstration of his balls of steel as a pitcher, pitching 5 innings and leaving with two on and nobody out. Both runners would score and his line of two earned runs is not exactly indicative of how well he pitched overall. He got big outs when in trouble and he never let the Padres sluggers feel comfortable in the box. When he fell behind in the count he found ways to come back and initiate soft contact. He was efficient and he showed why he may be one of the best dumpster dives of the Sabean/Evans era.

The Conor Joe and Michael Reed experiment needs to end now before someone gets hurt. From Dr. Lefty in a comment on yesterday’s post:

The two new corner outfielders are 0-14 with nine strikeouts, three pie throws (Joe) and one near takeout (Reed) of the only functioning shortstop on the roster.

You can read more on Joe and Reed in Lefty’s superb post. What I found most shocking was the utter lack of experience for Conor Joe as an outfielder and it all makes sense when watching him throw and track fly balls. SMH

It’s not about small sample sizes or giving players a chance in this case. Sometimes how you fail is more important than the failure. If a player is putting up good swings up, making hard contact, working counts and looking confident and still coming up empty at the plate then you have signs of encouragement that merit patience. In the case of Reed and Joe… well, we all watched the past three games.

I don’t like pointing out flaws and failures in players. I always root for anyone wearing the Giants jersey. I don’t care if Clayton Kershaw, Yasiel Puig or Darth Vader gets traded to San Francisco. I will root for them just as hard as I encourage Bumgarner or Posey and so should you. It may well be that Zaidi is a mad genius and both Reed and Joe turn out to be serviceable or very good Major Leaguers contributing to wins for the Giants one day. Unfortunately, that time is not now and you do’t make experiments with castoffs from the likes of the Reds and Twins if you want to win and you are the San Francisco Giants. It’s just not done. The job of the Giants GM is to compete every year and to build for the future simultaneously.

We all know the Giants flaws. However, with the payroll the Giants have and the resources at their disposal the decision to install Joe and Reed on the 25-man roster, let alone as starters in the outfield, is simply unconscionable. The question remains: how long will it take for Zaidi to make changes and admit his mistake.

What I find most agonizing about the Zaidi era so far is the sinking feeling that we’re turning into the Dodgers when it comes to the sway of the front office over managerial game-day decisions. If this is the case we are headed for more bone-headed by-the-numbers lineup choices, pitching changes and so forth. Analytics are killing the drama and poetry of Major League Baseball and if Zaidi is any indication, the black plague of numbers is now swooping over our fair lands and about to infect our beloved baseball club. It is ironic that a derivation of the term “analysis” proves so utterly incapable of understanding the ebb and flow, nuances and intangible elements of baseball and in-game decisions. While analytics may prove useful in evaluation individual player skills, the use of numerical tools to drive all decisions regarding lineups, pitching rotations and pitching changes is simply moronic. See Dave Roberts and the 2017 World Series. Want a more recent example? See Andy Green lifting Padres starter Nick Margevicius after only five innings in which the left hander dominated the Giants hitters and made them look like a ragtag bunch of high school players suddently asked to play in a Major League Baseball game. If this is the way our Giants are going to be managed…

Consider me a dissident.