Dubi Do and the Great Yazoo 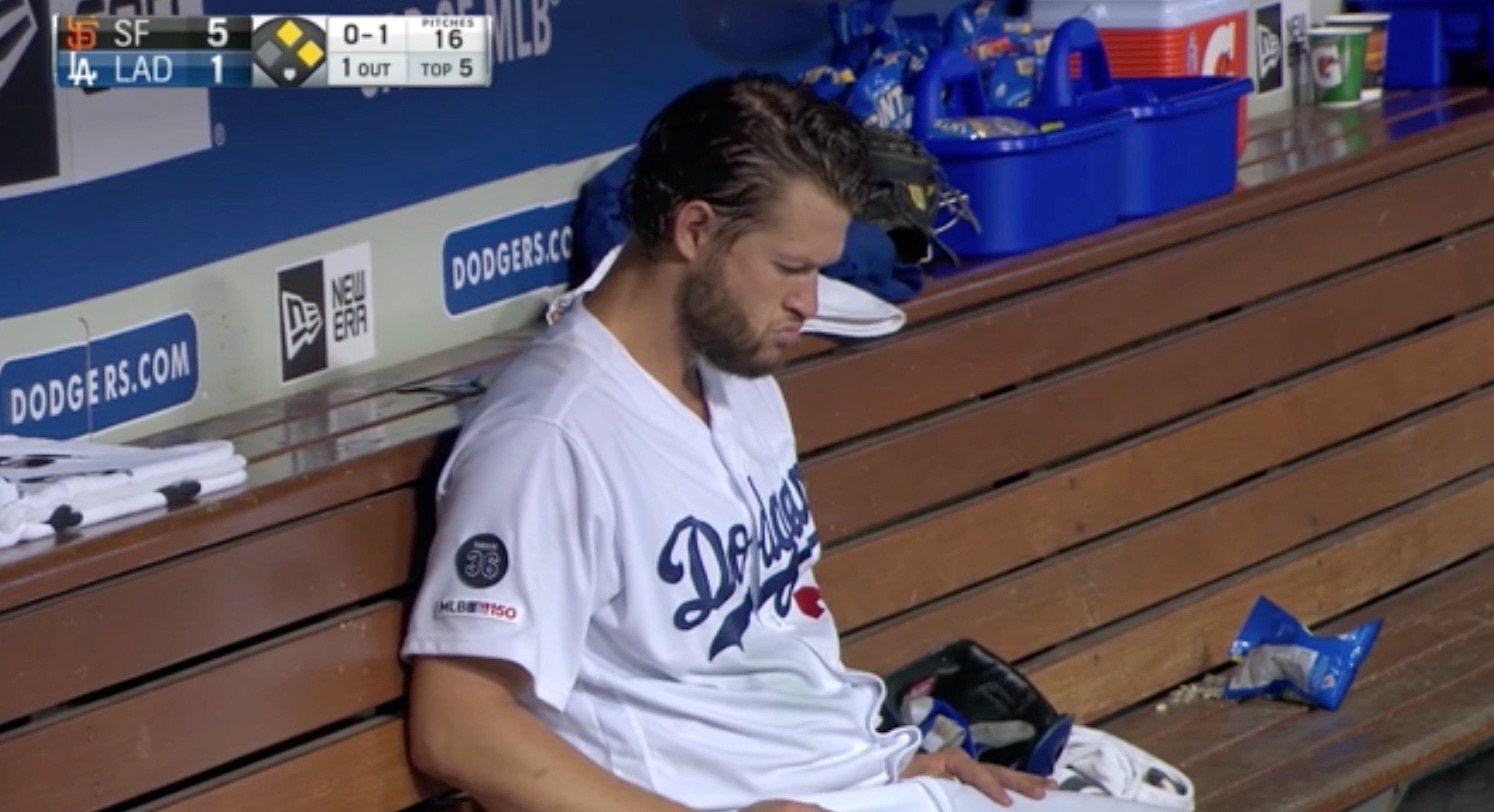 The game began with some dreary statistics, intoned by announcer Jon Miller. Clayton Kershaw’s sparkling career record against the Giants. Jeff Samardzija’s record of futility at Dodger Stadium, never having won a game there despite having pitched reasonably well. The Dodgers on the verge of clinching the NL West title for the seventh year in a row and celebrating right in the Giants’ faces.

Then the Giants stranded six runners in the first three innings against Kershaw, and the only reason it wasn’t seven was because Buster Posey, who’d struck out with the bases loaded and one out in the first inning, grounded into a double play the next time up (in the third) to erase one of the runners.

Here we go again with the Mighty Kershaw and the woeful Giants. (Even good Giants teams have been woeful against Kershaw.)

But then the fourth inning came and the fifth, and all of a sudden it became fun and weird and very, very satisfying. Unless you were Clayton Kershaw, that is. But we’ll get to him.

Mauricio Dubon is a native of Honduras, but he spent his high school years in Sacramento dreaming of playing for the Giants. He knows all about the storied Dodger-Giant rivalry, and in his first trip to Dodger Stadium as a major leaguer, there he was in the lineup instead of his role model, Brandon Crawford, facing a first-ballot Hall of Famer.

Was the moment too big for him?  It was not. He took a tremendous at-bat, fouling off nasty pitches, and finally clobbered a ball over A.J. Pollock’s head off the left field wall for a double. Then, in the fourth inning…this.

Mauricio Dubon has a double and a homer in his first two career at-bats against Clayton Kershaw: pic.twitter.com/5OfYNH8Of2

I like this clip of the homer because you can really hear the Dodger fans booing, plus you get some disgusted Kershaw shots. Dubon heard the booing, too.

Mauricio Dubon on his jog around the bases after homer: “That was awesome. That was incredible. Listening to boos at Dodger Stadium, Giants-Dodgers … it was fun.”

The best part was that Dubon wasn’t done. His next time up, now facing Dodgers’ relief pitcher Dylan Floro, he hit a two-run single that ended up being the difference in the game. Here are all of his hits in one clip.

Sadly, he did not get the triple he needed to complete the cycle, but–have a night, kid.

“It’s a big stage and you wouldn’t know it the way he handled himself,” Bochy said. “He crushed that homer and the double and got another huge hit. He’s got a great way about him. He’s got a lot of confidence. I love the way he carries himself.”

Pavlovic went on to share an obscure tidbit that might provide more encouragement about Dubon’s future than even his breakout performance last night.

Dubon showed off much more than confidence, though. He’s a smart and tough hitter, and he took plenty away from an early season matchup with Kershaw, who rehabbed against Dubon’s Triple-A team when he was still with the Brewers. Kershaw pounded him inside that day and had plenty of success. Dubon vowed that if he faced him again he would look inside and not swing at anything on the outer half.

It’s very, very early in Dubon’s career to get overly excited about him, but wow, is this looking like a tremendous pickup by Farhan Zaidi. Too bad he had to give up top prospects to get him, but–wait, what? He gave up a pending free agent who’d been so bad that some of us here were calling for his release in June? And a 29-year-old often-injured guy stuck in AAA after inconsistent major league results?

Here’s what I said, reporting from Baltimore after an especially feculent start by Drew Pomeranz.

Farhan Zaidi’s had a pretty quick DFA trigger finger, and I’m actually going to be surprised if Pomeranz ever throws another pitch for the Giants.

Another day, another clutch hit for Mike Yastrzemski

Pretty much the only bright spot in that awful game at Camden Yards on May 31 was Yaz, at that point not even a week removed from his major league debut. Playing in the home ballpark of the team that drafted and then gave up on him, Yaz hit an RBI triple in the first inning and his first major league homer in the second inning.

Since then he hasn’t stopped coming up with big hits. One of these days I’m going to do a whole post on Yaz’s best moments of 2019, and that will be fun. He’s packed a lot of great memories into just a few months, and last night was another one.

You could see it unfolding in the top of the fifth inning, with the game tied 1-1. The Giants had been making us want to gnaw our own hands off with all the stranded runners, but the one thing that had accomplished was running up Kershaw’s pitch count, and as Miller informed us, the Dodgers had been very conservative with Kershaw all season, limiting him to a strict 100-pitch cap.

Bochy had started an all-righty lineup against Kershaw, and as you watched Kevin Pillar grind out a 12-pitch walk and Kershaw’s pitch count rise, you started doing math. Pretty soon he’d be coming out of the game, and then Yaz could hit for Joey Rickard, who had started the game in left field. And sure enough, here came Dave Roberts to take the ball from Kershaw. After Roberts then ordered an intentional walk to Posey (more on that in a minute), just as expected, in came Yaz to pinch-hit for Rickard. And just as expected, after a spirited eight-pitch battle, Yaz hit a two-run double, cashing in Kershaw’s runners.

It’s fair to say that Kershaw didn’t appreciate being taken out of a tie game with two runners on. Indeed, that was the first time in 47 career starts against the Giants that he had failed to complete the fifth inning.

In this video you can see him demanding “WHY?” of Dave Roberts as his manager removed him from the game and then taking out his frustration on the water cooler in the dugout.

Clayton Kershaw upset about being removed from game. pic.twitter.com/7mNqMtGY9y

Then he had to sit and watch helplessly as Roberts ordered Posey walked intentionally (after Kershaw had faced Posey twice with a total of five runners on and stranded all of them) and then Brandon Belt (career .068 versus Kershaw), while rookies Yastrzemski and Dubon completed their heroics as already described.

The Dodgers intentionally walked Posey and Belt. The two they chose to face — Yastrzemski and Dubon — drove in four runs. That was some bizarre decision making.

I’m no particular admirer of Kershaw, but I kind of get his point. And I haven’t seen a pout that big since the younger Lefty Jr. was a two-year-old.

(As for Dave Roberts, he seems like a heckuva nice guy, and he reportedly makes some pretty good wine with his business partner, Rich Aurilia, but…yeeeeesh.)

No report yet on the condition of either the water cooler or Kershaw’s big toe.

It’s no secret how much I hate the Dodgers. Indeed, I wrote a post here in July 2017 called “I Hate the Dodgers.” But I have to admit they were all class in their pregame tribute to Bochy as he begins his final series managing at Dodger Stadium. They had Dave Roberts, who played for Bochy and is now his good friend, doing the honors. They had Vin Scully narrate a tribute video. And they gave him a signed Sandy Koufax jersey, knowing that Bochy as a kid had idolized Koufax. I’m sure all the gifts of wine and liquor Bochy’s received on his farewell tour will be enjoyed in due time, but this was way better.

At the beginning of the tribute video, Scully pointed out that Bochy, who has managed teams in the NL West for the past 25 years, has more wins than any other opposing manager in the history of Dodger Stadium. There have been some memorable ones–see Andrew Baggarly’s piece for a great rundown–but who can forget the time that Bochy caught Don Mattingly making two trips to the mound?

C’mon, you know you want to watch it. Here’s the video, with the incident called by Vin Scully. Besides the “two trips,” there are three things to notice: (1) Scully immediately understood what DTT had done wrong (2) Scully was pronouncing our skipper’s name “Boshy” then, too and (3) Clayton Kershaw had started that game and been ejected from it, which is why Joe Torre had been ejected and Mattingly was the acting manager.

Anyway, fast forward over nine years to last night, and there’s a lot of water under the bridge since that game at Dodger Stadium on July 20, 2010.  But one thing hasn’t changed: Bochy/Boshy is still managing circles around his hapless counterpart in the home dugout. Besides expertly pulling the string to pinch-hit Yaz in the critical fifth inning, he had to figure out how to get six outs against a potent lineup between Samardzija’s exit and Will Smith’s save opportunity in the ninth.

Six weeks ago, those six outs might have included Mark Melancon or Sam Dyson. Two weeks ago, maybe Trevor Gott would have been involved. One week ago, surely Reyes Moronta and Tony Watson.

All of ’em are gone/traded, seriously injured (Gott and Moronta are on the 60-day DL), or, in Watson’s case, unavailable after landing hard on his pitching wrist a couple days ago. So we had Tyler Rogers, just ten days removed from his long-delayed major league debut, pitching the seventh inning at Dodger Stadium with a slim lead. And then we had…those other guys, too.

Once again, Bochy’s bullpen string-pulling worked, and they handed the two-run lead over to Will Smith for the ninth, and…well, never mind what happened in the ninth. All’s well that ends well, right?

Anyway, last night was a great reminder of Bochy’s long and glorious history as a master strategist at Dodger Stadium.

All in all, it was a great night for the Giants. Kind of a weird one, too.

Oh, and props to Samardzija, who did finally get his first career win at Dodger Stadium with six solid innings of work.

As for A.J. Pollock and his three homers: when Yaz hit three bombs in Arizona a few weeks ago, Yaz’s team won.

I know, I know. Beede’s MyGuy™, but he’s making us all crazy, and let’s be honest–if Johnny Cueto’s back hadn’t tightened up, Beede probably wouldn’t be making this start. On the other hand, one of his best outings of the year was a June start at Dodger Stadium where Beede earned his first major league win. So maybe he can channel that positive energy tonight.

Or maybe “Boshy” can outmaneuver Dave Roberts again. Whatever works. Lefty out.