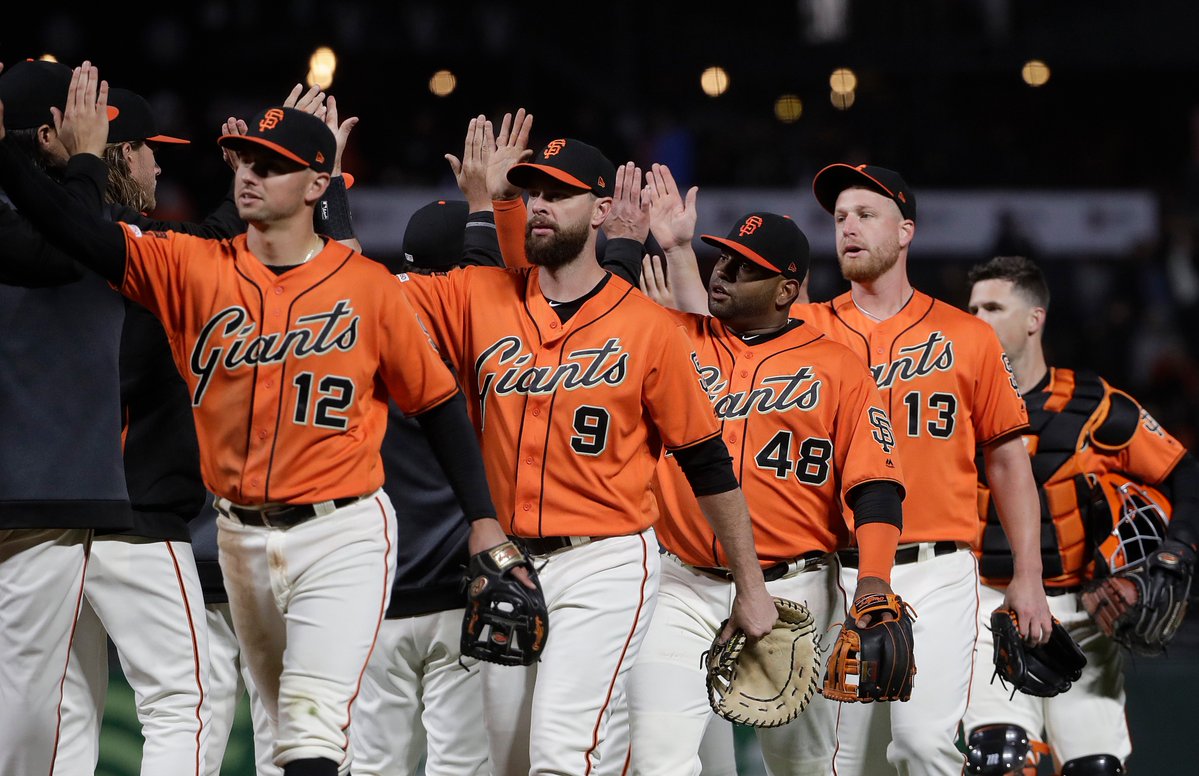 The first-place Bashin’ Brewers swaggered into town for the weekend, and as we were reminded multiple times during the broadcast, the Brewers had more than twice as many team homers as the Giants did. Indeed, just four hitters on the Brewers–Christian Yelich, Ryan Braun, Yasmani Grandal, and Mike Moustakas–had more homers combined than the entire Giants team.  Meanwhile, the Giants’ starting pitcher, Drew “Friday Night Lights” Pomeranz (so dubbed by me because he’s now started the last four Friday night games), came into his start with an ERA over 7.

So, just as we all expected, the Giants scored all their runs by way of three homers while the Brewers could manage just two unearned runs off Pomeranz and a third run gifted via a wild pitch from Mark Melancon.

Mike Yastrzemski hit his second major league homer and his first at Oracle Park. It was the game-winner, and it was an impressive one.

The Giants have won three in a row at home this week, and this is their second three-game winning streak in the first two weeks of June. They are now 7-4 for the month, and it’s worth remembering that last June they went 18-10, and their last winning month before that was June, 2016 (17-10).  So what is going on with the Giants in June so far?

The pitching has been much better

When the Giants went into a hideous free fall in May, in large part that began with one horrific start after another, putting a weak-hitting team into a deep hole. (You could quibble with the description of “free fall in May,” as the Giants have been bottom-dwellers since Opening Day. But after starting 2-5 in their season-opening road trip, the Giants actually played .500 ball from then until mid-May, when they were 8-7 for the month. Then the second half of May happened.)

For the month of June so far, the rotation ERA is 3.43, much better than April’s 4.13 or May’s 7.32 (!!!). This last turn through the rotation in particular has been excellent, with great starts by Madison Bumgarner, Shaun Anderson, and Pomeranz, a solid start by Jeff Samardzija, and a better-than-the-linescore-looked start by Tyler Beede. Adding in the bullpen, the team ERA for June is 3.31, compared with 5.85 in May and 3.81 in April.

One theory about why the pitching has stabilized is that after the catastrophic last half of May, the Giants seem to have accepted their 2019 fate and are letting younger starters (Anderson and Beede) take regular turns in the rotation rather than sending them right back to AAA if things don’t go well (see Suarez, Andrew; Blach, Ty; Rodriguez, Dereck; and Beede himself twice). If you’re not frantically trying to fix things on the fly so you can compete, you can give players a longer leash (see also Yastrzemski, Mike). Once the lens changes from “trying to compete” to “seeing what we have for the future,” a number of things are possible. In this instance, the Giants seem to have landed on a stable rotation that is working for them at the moment.

Will Smith has been ridiculous

When the Giants are losing, you can kind of forget about Smith, whom you might see once in a week or so. This week, though, the Giants won three straight close games, with Smith earning the save in all three. The stats alone are impressive:

…but they don’t tell the whole story. Not only is Smith, most days, a no-drama ninth-inning closer, but he has been neutralizing some of the best lefty hitters in the National League, including, just this past week, Corey Seager, Cody Bellinger, and Christian Yelich.  The pitch he got Yelich on last night was absolutely filthy.

Remember how quietly important Javier Lopez was in the 2010 postseason?  I bet Jason Heyward, Chase Utley, Ryan Howard, and Josh Hamilton still do. If I’m a contending team and imagining myself facing the lefty sluggers of the Brewers or the Dodgers in the playoffs this year (or the Brewers in a tight divisional race), I want Will Smith.

A few key hitters have warmed up

Pillar and Sandoval both went deep last night. Pablo’s was probably the most impressive because it went opposite field, but I also enjoyed Pillar’s straight pull homer to left. We don’t get enough of those from Giants righties, and it’s the quickest and easiest way to solve a tough hitters’ park.

Any or all of these three, along with the aforementioned Will Smith, could be trade bait in the coming six weeks.

Now, let’s not kid ourselves. This is still a really bad hitting team. Just when we Warriors fans needed some cheering up yesterday morning, Grant Brisbee drops a story about how the 2019 Giants, if the season ended today, would be the worst-hitting team in franchise history. That…that’s a long time, and it includes the Dead Ball Era in the early 1900s and some really bad Giants teams in the 1970s and 1980s.  But in June, the team has improved from its Fightin’ Mendozas status in April (.214 team batting average) to .242 (still bad, but not quite as abysmally so).

It was a nice win for the Giants last night, and they’re on a little roll, so maybe it’s mean to quibble. Still, we should mention a couple of style points that were deducted on the scorecard.

This could be the last…scouts will be watching…oh, I can’t. I’m just going to savor a MadBum start. Lefty out.

If you’d like to join a lively TWG group at a Sacramento River Cats game on Friday, July 26 (7:05 p.m. first pitch), please email me by next Friday, June 21 (leftydana@sbcglobal.net) and tell me how many tickets you’d like. This is a great opportunity to meet blog legend Totalfan62 (visiting from Atlanta for his high school reunion) and other TWGers.