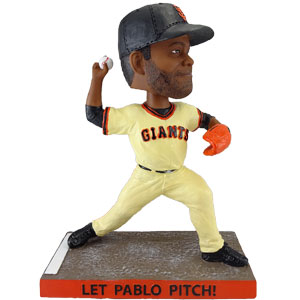 “Money does not change the sickness, only the symptoms.”–John Steinbeck, The Winter of our Discontent

Good morning from Cannery Row in Monterey, where we’ve come for a weekend getaway by the ocean. Here is the view from our room as well as a statue of John Steinbeck with his buddies. You’ll notice there’s a seagull about to poop on Steinbeck’s head. That’s about how things went for the Giants last night, too.

How bad was it? Well, by the seventh inning, the fans still left at Oracle Park were chanting for Pablo Sandoval to pitch, and the Giants have only themselves to blame. After all, when you have a marketing event structured around Pablo pitching, you raise expectations. Alas, it was not to be.

Bochy said he heard the Pablo chants but wasn’t going to pitch him because he’s playing third tomorrow.

What kind of non-sequitur crap is this? That’s like me declaring that I’m not going to eat a bowl of cereal tonight because I have to write tomorrow. If you give the fans a game this lousy, you owe something to the fans who stick around.

I would rather have had Pablo pitch in this game and Pomeranz play third tomorrow. It’s not like the postseason chances will be affected.

Brandon Crawford, who caught conjunctivitis (commonly known as “pink eye”) from one of his little germ-carriers, was the lucky one. He didn’t have to play last night. I, too, have had pink eye back when my kids were little, and while it wasn’t pleasant, I wouldn’t blame Crawford for feeling relieved for not having to be in that mess. Hopefully they didn’t even let him in the clubhouse because pink eye is highly contagious, I’m here to tell you.

On the other hand, Crawford’s absence directly led to four unearned runs in the seventh inning, so I dunno, maybe use protection in the future? If It weren’t for his pink eye, the Giants would only have lost 14-2.

So we need to wash this one off as quickly as possible, but let’s first have lists of villains and heroes. SPOILER: One of the lists will be a lot shorter than the other.

And that’s it for the “heroes” list, although Kevin Pillar had two hits and also made a nice catch, and Pablo Sandoval (who did not pitch) came off the bench and went 2 for 2 because of course he did.

Yes yes yes. Fans like to vent. “No pride.” “Don’t care.” “Didn’t come to play.” Here is why you have games like tonight. This was game 50. Here are all the starts that have lasted at least six innings. Do the math on how many innings the bullpen has had to throw. #sfgiants pic.twitter.com/80fp4h7dfe

This should’ve ended the inning. Instead it allowed a run, then set up a 3-run homer. The Giants will want to forget tonight pic.twitter.com/SVWeTgEnsY

Speaking of Mac, this cannot be good news for him.

However, it is good news for me, since Yaz is MyGuy™ in AAA.  My other AAA guy, Tyler Beede, had a good start for the River Cats last night, giving up one run and striking out eight in seven innings–and losing 1-0, so I think he’s about ready to come back to the Giants.

I just don’t even know what to say about this team, other than the obvious (“they suck”). Remember when Joe Panik hit that walk-off single to complete a thrilling ninth-inning comeback? Sure, you do. It was only Tuesday. Since then, the Giants had that mess of a Samardzija game (six unearned runs in the second inning), that gut-wrenching extra-inning loss that included blowing a late-inning lead for Bumgarner…and then this 18-2 shellacking. Did you know that set a new record for Giants runs allowed at Pac Bell/SBC/AT & T/Oracle Park? Another funny story: The Diamondbacks were slumping coming into last night’s game. They scored three times as many runs on Friday than they did in their whole series against the Padres earlier this week.  Hilarious, huh?

What’s next? Well, Yaz, and maybe some more playing time for Austin and for Pablo. How much longer will Pomeranz and Holland last on the pitching staff? My guess is for awhile yet. The Giants are paying those two guys actual money, and unless some younger pitcher forces the issue, there’s always the chance one or both could start pitching well and Farhan Zaidi could flip them in a July trade.  (However, the Giants do have a couple lefty relievers pitching well in AAA, and no, not named Steven Okert or Ty Blach–it’s Williams Jerez and Sam Selman. Bet we see both those guys after Zaidi sells off Watson and Smith for parts.) Is it time for Abiatal Avelino to come up and be the backup shortstop? This Solano thing isn’t going especially well, and Avelino has his batting average up to .285 now after a rough start.

I thought Suarez pitched pretty well despite his final line score. He was one out away from giving up just one run in six innings, and how long has it been since a Giants’ starting pitcher did that? (HINT: The answer is in the Schulman tweet/chart above. Mayday, Mayday!) So good luck to them. The Mr and I are going to the aquarium. Have a lovely Saturday. Lefty out.