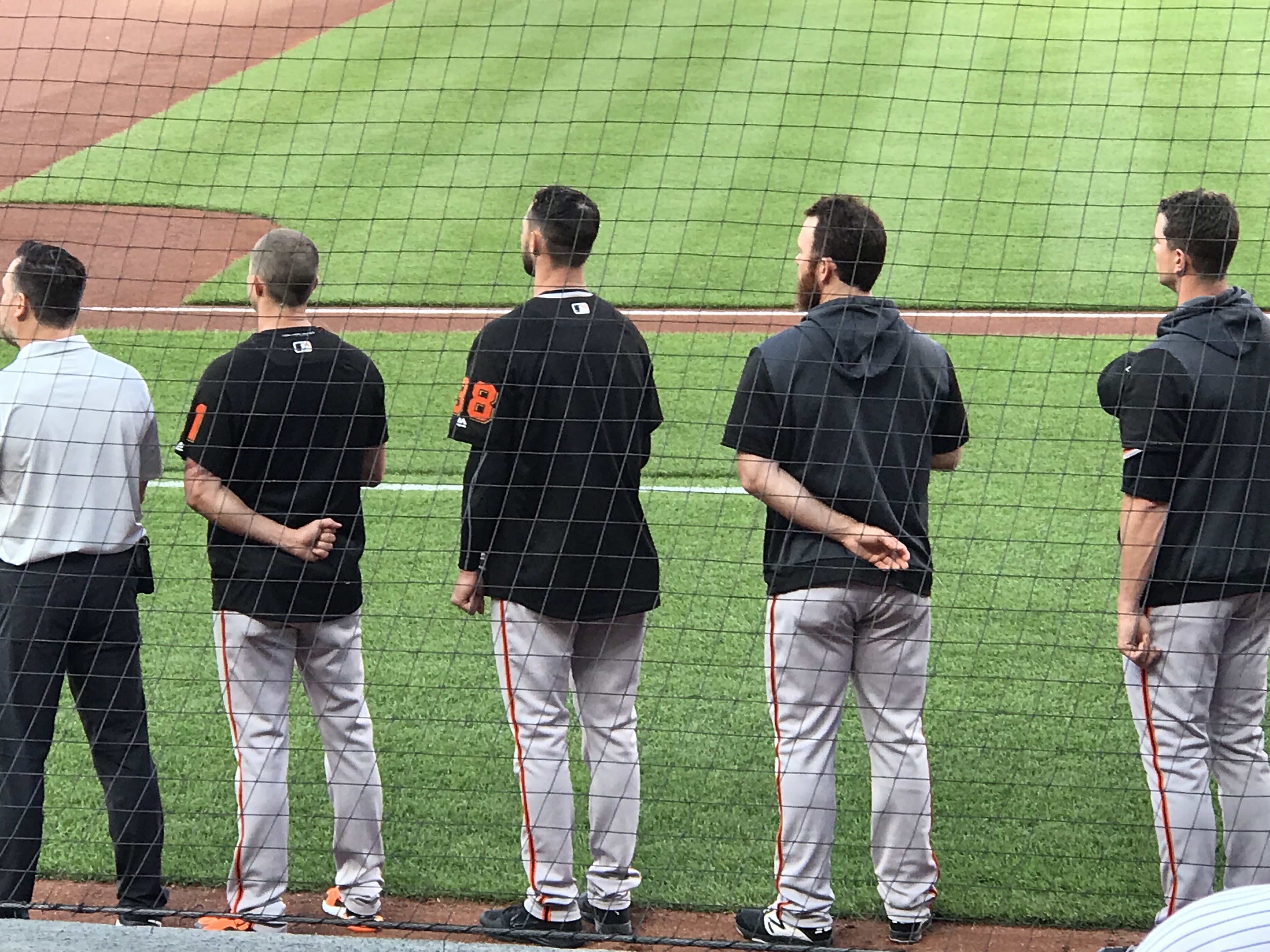 It was going so well. It was our first trip to Camden Yards, and we were duly impressed. Our seats were fabulous, just five rows behind the visitors dugout. The weather was warm and pleasant. And the Giants scored five (5) runs in the first inning!

“That’s hard to take for us,” Bochy said. “That’s been an issue for us and we go out and have our biggest first inning. You’d like to enjoy it for a little while. It lasted about 10 minutes. That’s frustrating for the guys.”

Yeah, it was hard to take for us, too, Bruce. Check out this real-time exchange I had on Twitter. The top Tweet was after the top of the first. Then–well, you can see.

OK, let me back up a little bit. Since it won’t be too fun to talk about the game itself, I’ll talk about our first impressions of the park—which is, after all, the reason for my trip here. I can assure you that it was not the baseball. We’re staying in a hotel about a 10-15 minute walk from the park. We spent the day enjoyably watching “Rocketman” at one of those cool movie theaters with recliners and food service to your seat. We had happy hour at Sullivan’s Steakhouse before the game (incredible Oysters Rockefeller for $7  for four on the happy hour price; we had two orders). Then we strolled over to the park, serenely trusting that it would not be crowded and therefore quick and easy to get in. (It wasn’t and it was.) Here was our first view, approaching the park from the rear.

We paid our respects to Babe Ruth, who was a Baltimore native, so of course he has a statue in the park, even though he never played for the Orioles. This reminded me a bit of being in Salzburg, Austria last year, where they make a HUGE deal for tourists about Mozart’s birthplace, even though it turns out Mozart loathed Salzburg, got out as soon as he could, and made his life in Vienna. Anyway, it’s still a cool statue.

I mentioned we had great seats. Here are a few shots of the inside of the park from our seats.

We were close enough, and the park was empty enough, that I caught Pablo Sandoval’s attention and got him to wave to me.

After each inning in the field, whichever Giant had the ball from the last out would throw it to the assembled Giants faithful behind the third base dugout. MrLefty snagged one thrown by first-base coach Jose Alguacil. This was the first souvenir ball either of us have ever gotten during a major league game, after all our years of going to them.

The photo up top is a few Giants players during the National Anthem, and the tall guy in the middle with #38 on his left shoulder is Tyler Beede, who inspired the title (composed by MrLefty, who is also a songwriter), and–I’ll get to Beede in a minute.

OK, enough travelogue. Here are a few thoughts about the game. MrLefty decided that “desultory” isn’t strong enough to describe what’s gone on this season, so he found a new word.

“Feculent” is, for example, an outstanding way to describe how Drew Pomeranz pitched, not just last night but during the month of May. It’s really jaw-dropping.

This is really…amazing. 10.1 innings pitched and 22 runs. 25 hits and nine walks and a WHIP of nearly 3.3. Pomeranz now has a bWAR of -1.2 for the season (fWAR -0.6). By either metric, that is by far the worst of any major league starter.  Even Pomeranz agreed that he’s been feculent.

“A lot of things just go bad,” he said, “a groundball here (for a hit), a groundball there, a grand slam, walk a couple of guys. I don’t know how to explain it. It just sucks. “

Notice how he snuck “grand slam” there in the middle of the list, maybe so we wouldn’t notice?

How feculent was Pomeranz? Well, I don’t know if they showed it on TV, but by the third batter, Buster had whipped off his catcher’s mask and was glaring at his pitcher. When Bochy finally came to get Pomeranz in the second inning, his shoulders were slumped and his head was down. Bochy’s, I mean. Let’s just say the body language was terrible all around. Still, I was shocked, and so was a young Orioles fan sitting in front of us, when a Giants fan actually BOOED Pomeranz and yelled “YOU SUCK” at him as he mercifully exited stage right.

Even Michael Morse, who always seemed like the nicest guy alive, couldn’t help but pile on. Check out this reply to a Pavlovic tweet.

Farhan Zaidi’s had a pretty quick DFA trigger finger, and I’m actually going to be surprised if Pomeranz ever throws another pitch for the Giants. We shall see.

OK, there were a couple good things

So as bad as Pomeranz was–and he was B-A-A-A-D–the Giants had at least shown some signs of life at  the plate, right? Six runs by the second inning? At least it will be a lively slugfest…Nope. After the second inning, the Giants got exactly two hits for the rest of the game, a third-inning bunt single by Duggar and a ninth-inning single by Belt. That was it. However…

2018 Dereck Rodriguez made an appearance. Bochy brought him in to relieve Pomeranz, and D-Rod pitched 4 2/3 scoreless innings. He looked sharp, poised, and confident, and yeah, the Orioles, but the same O’s had all looked like, well, Babe Ruth against Pomeranz just minutes earlier.  Welcome back, kid. We missed you.

Former Orioles prospect Mike Yastrzemski had a big night. Yaz had a first-inning RBI triple, a second-inning homer (his first in the big leagues), and a walk and scored two runs. For a guy who imagined his major league debut coming at Camden Yards for many years, this had to be a big thrill. It also led to one of Henry Schulman’s now-classic Twitter typos.

This has been about the most awful week of Giants baseball I can remember, since 1985 was a long time ago and we didn’t have the Internet then. The only game the Giants won, on Thursday, featured a solid and encouraging start by Tyler Beede, his first successful outing in six major league appearances over two seasons.

May is over. Today is June 1, and the Giants stand at 12 games under .500 and a whopping 16(!!!) games out of first in the NL West. With the draft coming up this week and this feculent season already down the crapper, it’s time to let it be. Cut the deadwood. Trade what can be traded. Play the kids.

So let it Beede.

Let it Slater, Selman, Adon, and Menez. Heck, maybe in a couple months even let it Bart.

That’s pretty much all we have left as we wallow in the feculence.

We’re sitting higher up today, near the press box, to get a different view of the park.  We have our outfits all ready, too.

Hope you all have a great Saturday that is neither desultory nor feculent. Lefty out.